Khalid Keshta is an Omnipod® Ambassador and has an ongoing commercial relationship with Insulet. This article originally appeared in the digital version of Desang Diabetes Magazine and was sponsored by Insulet Omnipod. 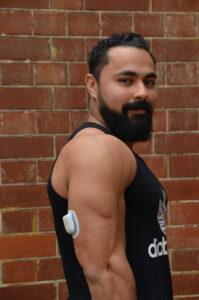 Khalid Keshta was diagnosed with Type 1 diabetes in 2011 on the day of his 18th birthday. It’s a familiar story to begin with. He remembers it all very clearly, “I started to lose a lot of weight, yet I was athletic. I used to play football, but I’d get really thirsty, running to the loo all the time.”

Familiar to an extent, but this story has a slight twist as both of’ Keshta’s parents are doctors. “I had one grandma who had Type 2 diabetes, but Type 1 diabetes really wasn’t on the family radar at all. My parents bought a blood test meter from the pharmacy and my whole family did a blood test. They all came back with a reading of something like 5.6mmol/L, but for me it just kept reading ‘error’, and in the instructions it said if the meter was giving an error message, it meant there was not enough blood applied or the blood sugar is too high to be read. We decided to go to the A&E to check this issue out. Upon checking my blood sugar levels, they turned out to be 47mmol/L. I was told later that I had been a medical emergency. The doctor told me at that time that if it wasn’t for the immense amount of water I’d been drinking and urinating constantly, I would have been in a diabetic coma, or possibly dead.”

When he was diagnosed Keshta remained in hospital for 24 hours, initially on an insulin drip. “The great thing was that when I woke up the next day, my glucose was down to 15mmol/L and I felt really hungry, because that was pretty low for me at that point. I quickly began to feel a lot better. It was good to know what was wrong; I knew there was not a cure but there was treatment. I played football the day after I went home and I felt a huge difference ­– my eyes weren’t blurry, I wasn’t feeling so tired and lethargic anymore, it was all good.”

At this point, he had been eying a career as a footballer, three months later he broke his knee and tore some ligaments. He had a couple of operations to fix it, but they failed, so his intended career was over. However, he refused to be inactive and started to go to the gym, saying “I began to see changes to my body shape fairly soon, then after a few years people said, why don’t you compete? I was aware of the old ideas that people with diabetes couldn’t do sports. I’d not been interested in being a competitive bodybuilder until I realised I could be different, I could compete as a bodybuilder with Type 1 Diabetes! It is a hard sport, but if I could compete on stage and do well, and at the same time raise awareness, I could help show people that you can do anything.”

In 2017 Keshta entered his first competition and won.

Daily routine
In 2011, Keshta came out of hospital using insulin pens on a regimen of multiple daily injections (MDI) and blood testing. He doesn’t recall getting much education or training and reckons maybe he knew 10% of what he knows now, but it was enough to get started. Adjusting insulin doses and carb counting came later. He says, “We are all different. With the bodybuilding I had to learn more about nutrition, about protein and carbs. I set about educating myself, studying with my mind focused on how to train while living with diabetes, as opposed to how people without Diabetes train.”

At the time of his diagnosis, Keshta was in his first year of studying for a degree in civil engineering. He went on to get a Masters but now he is not using those qualifications at all. After graduating, he worked in construction for four years and in his spare time he studied nutrition and sports. Then he took a course to learn to become a personal trainer and started as a part-time freelance personal trainer.

“The reality is that before you enter a body building competition, you go on a very strict diet intended both for weight loss and to pack on muscle” says Keshta. “I consulted with my HCP about my diet but in my view, it’s not that I can’t do it, it’s just a different challenge for me. Before a competition, I’ll be on a strict diet and train three times a day. Some days it might be a diet high in protein, some days high in carbs. I may aim to eat 100g of carbohydrate a day. If I have a hypo and take 30g to treat it, or to prevent a low, that means I’ve only got 70g of carbs left for the day. So, of the 100g, 30g have been simple sugars – like juice or sweets – that have no nutrient value. This is what makes it a lot more challenging for someone competing who has diabetes, because other competitors are consuming their carbs in the form of complex carbs that will fill them up and keep them energetic. Foods like oats, potatoes, sweet potatoes or pasta. However, some days I end up consuming all my carbs from juice or sweets which makes the prep that much harder.”

In recent years Keshta has moved away from MDI and onto an insulin pump. He recalls, “I’d heard of insulin pumps when I lived in Reading, but I was told my HbA1c wasn’t bad enough to get a pump. It took me a year of asking, but in the end, I did go on a pump. I was happy with it at the time but because of the tubing and the type of exercise I did, I had to take it off to train, so it ended up feeling like too much of a faff. Then I went to a JDRF event and saw someone with something on their arm; I just thought it was a massive sensor, but they told me it was an Omnipod® and it was actually a tubeless insulin pump. That really got my attention.”

The main point
In the meantime, the Keshta family had moved to Milton Keynes. At this stage, Keshta asked his GP if he could go on to the Omnipod® System, and he referred him to his hospital team. This experience was better, “I had an extremely helpful HCP, she asked the commissioner about getting me an Omnipod® DASH System and a week later I had an Omnipod DASH® System! At first, I had to learn where to place it but after a while I found the best places to wear it.”

When talking about what the main benefits are to him he says, “The main point is that it’s tubeless. I can also use temporary basal rates, which are handy, especially during or after exercise. I like the fact that it’s easier just to have to calculate my doses using the personal diabetes manager rather than on a basal/bolus regimen with two insulins on MDI.”

Keshta likes the fact that he can suspend insulin whenever he wants or needs to. He says, “This is very useful when I’m training, and I feel that my blood sugar might drop. So, instead of consuming sugar and messing up my diet as I used to do with MDI, I just suspend insulin delivery and that will usually reduce my chances of needing to consume sugar to prevent a low.”

Now Keshta continues to train, to compete, and to coach others as a personal trainer. He uses social media to help raise awareness of what Type 1 diabetes is. “Now,” he says, “People ask me what’s on my arm, and I tell them it’s my insulin pump. I love being different, I love wearing my Omnipod®, especially on my abdomen when in a competition- I don’t want to hide it. People comment on the muscles, then the Pod and then they ask, ‘how can you do this and have Type 1 diabetes?’ And I say, ‘You can be whatever you want to be’.”