Andy Lavender lives near Chester and works at the Cheshire West Integrated Care Partnership. He is a co-ordinator for the Live Well Cheshire West website. The site is an information portal, that provides information and services for people in Cheshire West. It certainly keeps him busy, as he says, “especially during a pandemic.” 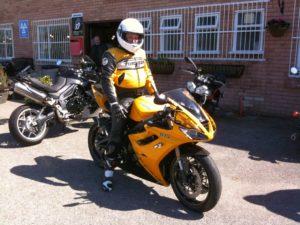 He is 53 years old and was diagnosed with Type I diabetes at the age of two on 30 December 1968. He says, “Judging by family anecdotes it’s possible that I’d had it longer. I was so young I don’t remember it, but family history says I’d been drinking like a fish and I went from not wetting the bed to wetting the bed. A doctor came to the house and did a urine test and told my parents to take me to hospital. There, a doctor walked in and stuck a needle in my arm, telling my parents ‘he will need this for the rest of his life. It was the first of many insulin injections. That was in Chester City Hospital. Back then people had some funny ideas. Some thought you had to ‘starve’ Type 1 diabetes, a very dangerous way to think. I was very skinny. My parents ended up discharging me and taking me to Alder Hey Childrens’ Hospital in Liverpool where they met consultant Mr Hudson who told my mother I was still very ill indeed. He had some food brought in and on watching me eat, he said to my parents, ‘the child doesn’t need a knife and fork to eat but a mechanical digger’, as I was scooping food into my mouth with my hands. After that I was properly on the mend.”

While at Alder Hey, Lavender’s control stabilised and he remained a patient at that clinic until he was in his early teens. However, after having had a serious hypo he was rushed back to Chester City Hospital. Following this, Mr Hudson advised I should transfer my care back there under a consultant whom he had trained, a Mr Fielding.

Lavender did find the transition from paediatric clinic to adult clinic quite difficult because it was totally different. He says, “I felt I went from having a lot of care to being left to get on with it myself. But I hadn’t had the right education – my parents had been educated because I was so young. My mother used to do my insulin shots and looked after my food. I reckon that from my mid-teens to mid-30s I was just guessing and bumbling through. I went from two injections a day onto an insulin pen and the basal/bolus regime but was told nothing about ‘lines,’ as they used to be known, or carbohydrate exchanges or counting carbohydrates. Then, when I was 35, I went to get a can of soup from a cupboard; I bent down came back up again and literally couldn’t see. After a while my vision did come back but I thought, ‘okay it’s time to go to hospital’, where it was confirmed that I had a fairly large retinal bleed.”

Lavender realised he’d just had enough of his diabetes, he remembers, “I realised I needed to get help.” As a result, he walked in to the diabetes unit and told a nurse, ‘I feel like I’m living out of a Lucazade bottle.’ The nurse listened to me and said that because I’d had diabetes for so long people assumed I had the knowledge and training that ought to come with that extensive time living with it. I wanted I go back to the old regime with just two injections a day, as I’d been more stable on that, but he said, ‘no, what do you think about using an insulin pump?’ I said, ‘don’t waste the money on me, give it to a child’, however he said, ‘it’s more about each individual case and I think you’ll do well on a pump.’ You had to go on a carb-counting course before going on a pump, and that was life-changing. I met a lovely lady called Natalie McEwan she taught me about adjusting insulin doses according to what I was eating or doing. I was one of 12 people in the room on the course and she’d come in with tea coffee and biscuits and a bowl of sugar, then she told us that as someone with Type I diabetes, you can eat just like anyone else, but you need to know the amount of carbs in everything that you eat, and you must dose for it. I’d always been told I couldn’t have biscuits, couldn’t have sugar – it was quite limiting. For me, this was a window onto a new world!”

And more good things were about to happen. One of the other people on the course was a lady called Sue Kelly. “She was also on her own,” recalls Lavender, “whereas other people came with partners or other helpers. We both happened to use the same blood glucose metre, but her GP wouldn’t supply the number of strips she needed, so I used to give her a box of strips every now and then to tide her over. We started talking – this was the first time I’d ever talked directly to another person with Type I diabetes. We became close friends, then dated, and a few years after we met, we got married. We have been together 11 years now.”

So, Lavender has been on a pump for more than a decade. He says, “The first pump I went on was an Animus Vibe. Sue also had the Vibe but she also had CGM as she had no hypo awareness. She had Dexcom and Animas and I just had the pump as I didn’t fit the criteria to gain access to CGM. I started to hear about this thing called closed-looping. However, around that time, J&J decided to leave the diabetes sector and the Animas pump was to be gradually withdrawn. For a while Sue and I found that we could extend the life of a G5 sensor, so I got a transmitter for me to use so we both on CGM. It was ground-breaking for me to see my glucose levels all day long.”

However, it proved impossible to keep up with ‘hacking’ sensors. It was more pressing that Lavender figured out what pump he should go on. “I started to think that I wanted a pump that worked with Dexcom CGM,” he says, “I googled it and found the Tandem t:slim X2. That was three or four years ago, when Air Liquide was just launching Tandem in the UK. I asked at the hospital for the Tandem t:slim and explained why. I learned that I was the only person who had asked for this pump; my healthcare team knew of it but had no one on it yet. I said, ‘it’s okay, I’ll work out how to use it myself’. It was a really simple pump to set up. Sarah, my Air Liquide rep, was amazing. She helped me so much in the first few weeks.”

Things were moving on, but Lavender was still not on CGM. That was about to change, but it was very much a ‘silver lining’ moment. One day he was riding home on his motorbike, due to take some time off work, when he was knocked off his bike. “I was pretty badly damaged,” he says, “I had major reconstructive surgery and was in hospital for nearly three weeks, literally incapacitated. I couldn’t even do my own blood tests. The hospital put me on CGM under an individual funding request [an IFR]. I finally got on CGM, the hard way, and I’ve been on it ever since. The CGM and pump proved their worth in hospital, really contributing to my control and recovery.”

Thankfully, Lavender recuperated and still swears by his pump-and-CGM set up. “I keep my pump updated with the latest software,” he says, “I went from Tandem’s initial Basal-IQ software straight onto its Control-IQ software upgrade as soon as it was available. It’s easy to do it yourself, it’s a simple software upgrade on the pump done via plugging it into a computer. This means you don’t have to wait for years to get a new pump, you can install the latest version at home yourself.”

With the Tandem pump, Dexcom CGM and the Control-IQ algorithm on the pump, Lavender was able to begin to deliver insulin via ‘closed loop.’ Based on the CGM reading of his glucose levels, the pump’s algorithm then figures out and gives an insulin dose, if required. With this set up, Lavender became very ambitious about his control, partly spurred on by Dexcom’s Clarity app, which shows how much time he had spent in range (TIR) each day. “I started to set myself targets to achieve tighter control. I was aiming to have 90% time in range every day. Natalie said to me, you’re after the Holy Grail – it might not be possible, diabetes can throw you curveballs.”

Initially, when he wanted to upgrade to the Control-iQ his healthcare team weren’t sure what the benefit would be, as he was already doing so well. “They even advised me to stay on the Basal-iQ software, which still involved an element of manual control’ he says, ‘But I thought, I might as well try it and see.”

Within 48 hours, he saw an improvement, so he worked on tighter settings, making the pump as effective as possible. “The pump has a touchscreen, so it’s like using your mobile phone. I found that I could finely-tune my insulin needs, and after four weeks I was hitting 90% time in range quite regularly. Then I had a day at 100% for the first time and that was absolutely amazing. It was an entire green bar on the Dexcom Clarity app, meaning 100%; it was mind blowing.”

Most people would have been happy at that, but no, Lavender was not done with the self-challenges. “I set myself the task to have a fully green week, at 90-100% for seven days and I did it, between 21-27 August last year. My worst day was the Friday where I only hit 91% but I finished the week on 100%. It was all down to the Tandem pump – what it can do and what I can do with it.”

However, Lavender knows that while technology can make living with diabetes better, he says, “I wouldn’t say it was easy, but it is easier. I think the pump gave me confidence to try to attempt these challenges. Plus, I now feel that I trust the Control-iQ software, and that’s reduced how much time I spend worrying about my health, which is great too.”