A catch up with Advanced Therapeutics and its range of Dana Diabecare insulin pumps. By Sue Marshall

This year the Dana RS insulin pump has been joined by the Dana i (the i stands for intuitive, intelligent, innovative and interoperable) in Advanced Therapeutics’ stable of diabetes technology products. 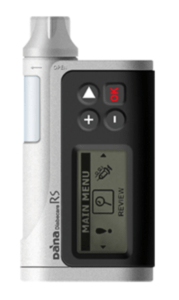 Advanced Therapeutics now stock the two variants of the Dana pump made by South Korean company SOOIL. The first SOOIL insulin pump was clinically tested at Seoul National University Hospital in 1979 and became the first commercially available insulin pump in 1980. Following ongoing research and development, and since called Diabecare, SOOIL obtained approval for the Dana Diabecare insulin pump from the KFDA (Korean Food and Drink Administration) in 1998. Dr Soo Bong Choi, a practising endocrinologist with 40 years experience of treating both Type 1 and Type 2 patients, designed the DANA Diabecare insulin pump series which is now being used by more than 150,000 users in 47 countries.

Says Hughes, “The Dana pumps feature automated delivery via a smartphone and seamless connectivity between the pump and either a smartphone or other device. We’re really only at the early stages – a melting pot – when it comes to interoperability as regards diabetes devices. Many products, companies and health systems have to adapt to this change.”

Dana RS
The Dana RS has been designed to be ‘alternate controller enabled’, known as an ACE pump. It’s Bluetooth capability allows for quick and stable connections to smartphones, providing the bridge needed for artificial pancreas algorithms to control the insulin delivery from the RS (which stands for ‘remote system’).

As well as being controlled by it’s keypad the Dana RS pump can be controlled via a smartphone via the Any Dana A (for Android) or Any Dana I (for iOS) App and is one of the smallest and lightest insulin pumps available.

“We were very pleased to learn of the compatibility of the Dana RS pump with the CamAPS algorithm as this has been clinically tested for more than 15 years and has the widest application; in children from one-year-old to adults in their 80s.  It is even licensed for use in pregnancy,” confirms Hughes.

Dana i
This has all the features of the Dana RS (such as interoperability), and then some! It uses a standard AAA alkaline battery and has Bluetooth version 5.0 for even greater range and stability of data transmission.  It features a more readable screen and 24-hourly insulin-to-carb ratios as well as 24-hourly Correction Factors (there is four of each in the Dana RS). The Dana i can be operated in one of three ways: by its keypad; by the Any Dana smartphone app; by HCL algorithms – such as CamAPS.  It is also future-proofed in that it’s software can be updated via an internet download using the AnyDana App.

The Dana pump range comes with a choice of infusion sets. Most use Teflon and come with 6mm or 9mm cannulas. The Soft Release O infusion sets spin 360° which can reduce site irritation. They have blue tubing, which makes air bubbles easier to spot. There’s also an Easy Release set with a unique 4.5mm metal cannula, which is ideal for 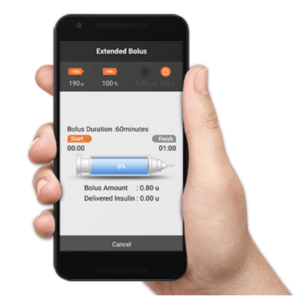 those with low body fat, or who do sports, and is ideal for very young children.

‘appy days
The AnyDana app for smartphones was the first of its kind when launched in 2018 with the Dana RS and continues with the Dana i. It means that users only have to touch the pump for cartridge changes. and for no other reason. All other factors can be amended in the app including bolus deliveries. It is the only pump that is currently licensed to do this.

CamAPS was launched just before the first lockdown in March 2019. Roman Hovorka, a professor of mathematics at Cambridge University Hospital, is the creator of this app and reports that users are coming on thick and fast, though some people are facing issues with funding and availability. It has been licensed for use in pregnancy and for children under the age of six. Both can be seen as badges of honour ­– that this is a very trusted system.

Both the Dana RS, which is slightly smaller and lighter than the Dana i, are fully compatible with CamAPS. Both have a small screen and just four buttons needed to operate them. The Dana RS can communicate with Android-based artificial pancreas systems, whereas the Dana i currently can’t, but that may change. Both also use the same consumables, both are waterproof and both remain available.

As well as the choice of Dana pumps, Advanced Therapeutics also has a product called MedAngel ONE which combines a medical grade wireless thermometer with an intuitive app to help protect your medications. The thermometer goes in with your insulin (or other temperature-sensitive medications) while the app on your smartphone will alert you if your meds are getting too hot or too cold.

Due to the success of the Dana range Advanced Therapeutics (UK) Ltd is growing rapidly and will be soon moving to recently purchased larger premises to accommodate this. Says Hughes, “This move to our own premises is a landmark development for our company, as it will enable us to take on more staff to support the growth of our business and our customers and to hold the levels of stock we need to fuel our future growth.”