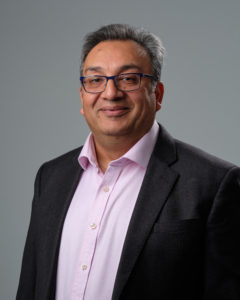 Introducing his technology at a recent online diabetes event, Afon Technology founder Sabih Chaudhry referred back to a research paper written in 2006 by Doctor of Philosophy John Smith. His paper was entitled The Pursuit of Non-Invasive Glucose: Hunting the Deceitful Turkey, the turkey reference being taken from a Mark Twain short story that asks many questions but has few answers.

Also in 2006, a non-invasive diabetes product called GlucoWatch was developed by a company called Cygnus, which was subsequently taken over by Animas ­– part of Johnson & Johnson – but the product development stalled and came to nothing (for more info, see below).

That fact has not put Chaudhry off his pursuit of this deceitful turkey. He explains, “The fact is that it’s a challenging – but emerging – technology. It involves photonics, sweat and electrophoresis [see glossary]. But there is scope to develop these products as there are known downsides to the currently available sensors ­– questions of accuracy, sensitivity and the potential for an allergic reaction to the adhesives needed to stick sensor onto skin.”

Afon Technology is using radio and microwave frequencies (multi-resonance), which are both on the long wavelength end of the Electromagnetic Spectrum, to read blood glucose levels via a non-invasive sensor. That’s to say there’s no ‘pokey’ bits stuck in the body; the sensor just sits on top of the skin unlike what might be called ‘traditional’ CGMs where the skin is punctured to allow a sensor to be inserted into interstitial body fluid to read glucose levels. 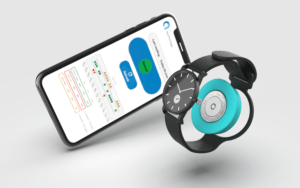 An Afon senor showing how it would attach to a watch strap, with app on Smartphone.

In 2005, Chaudhry had been undertaking scientific investigations in a laboratory in Bangor University, later raising money to continue to research into the possibility of designing such a sensor. In 2012, a trial at the Royal Liverpool Hospital showed the microwave factor. In 2015, additional funding allowed him to stop being a one-man band; he started the company which now has a lab in the Wye Valley with a team of researchers and engineers pushing the technology forwards. Chaudhry says with a small smile that, “Things can work wonderfully ‘on the bench’, but on the body there are the challenges of movement, the changing condition of the skin – and so forth. We took a step back to ask, what are we trying to do, and how?”

After taking the time to re-strategize, he and his team felt that they were going to be able to develop a colour-indicator as part of the device, showing yellow for hyperglycaemia, green for in range and red for a hypo. It would also indicate Time-in-Range measurements, increasingly TIR is seen as an extremely powerful enabler of self-management for anyone living with diabetes.

The design of the sensor is such that it would be worn on the wrist, potentially on a watch or just on any other wrist-strap. Being worn on the wrist means it could be prone to a jarring shock if knocked, therefore it needs to be robust, but people are already using watches, so integrating the sensor makes a lot of sense. It also means it does not have to be another wearable device on the body, while it will also be ‘manufacturer agnostic, being able to ‘talk’ to other smart devices with electro-magnetic compliance, such as smart phones. Afon’s sensor is likely to be the size of two £2 coins, stacked on top of each other and will last for two years.

A MARD measurement (mean absolute relative difference*) is used to assess the accuracy of both blood glucose meters and CGM sensors. In general, lower MARD values indicate higher accuracy. At present, Afon’s sensor is coming in at 20% whereas Dexcom’s G5 came in at 10%. Medtronic’s Enlite sensor is anything anything between 15% and 21%, likewise Abbott’s FreeStyle Libre.

Says Chaudhry, “The team has multidisciplinary skills and is slowly and systematically overcoming barriers. We are planning to apply for a CE mark in early 2022. Although Covid-19 has disrupted many of our plans, we are still pushing ahead with product development. Our aim is to commercialise a real time and non-invasive blood glucose monitor for people with diabetes which will alert the wearer (or their carer or a physician) when blood sugar levels move outside set parameters. The device will reduce the need for fiddly and sometimes painful fingerpricks and will give the wearer peace of mind that they are within a safe range. The ‘working title’ for the sensor is Glucowear.”

Professor de Vries, Medical Director at Profil, the diabetes research organisation in Germany specialising in internal medicine and endocrinology, and principal investigator at the University of Amsterdam’s Faculty of Medicine, said: “We evaluated the Afon device under both hyper-and hypoglycaemic (high and low blood glucose levels) conditions during the clinical trials and we were surprised and excited by the possibilities of this technology.”

If you like the sound of this non-invasive sensor, then help Afon by volunteering to wear one and give feedback.

“During the product development stage we may need volunteers to either wear a prototype device or give feedback on design or useability,” says Afon Technology’s CEO and sensor creator Sabih Chaudhry. If you would like to help create the best version of this device, fill in the form when you CLICK HERE.