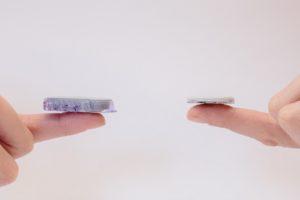 Two-thirds of the participants were assigned to use Dexcom CGM, and the others a traditional blood glucose meter. The group using Dexcom’s CGM spent an average of 3.8 hours more each day within the optimal range of blood glucose levels, 3.6 hours less each day in the very high glucose range and had a reduction in CGM-measured hypoglycaemia. In total, 63% of patients using CGM had an HBA1c of less than 8%, compared to just 39% in the traditional meter group.

Dexcom’s second study of its next-generation G7 interoperable CGM supports its efforts toward CE mark submission and US pre-pivotal work. Across approximately 360 sensor sections, 99% of readings were clinically accurate and safe for treatment decisions. The mean absolute relative difference (MARD) — the average absolute error between all CGM values and matched reference values — came in at 8.7%.

Dexcom touts its G7 wearable CGM as 60% smaller than the G6 and says it contains a smaller all-in-one sensor applicator and transmitter with a 30-minute warm-up time before use. In addition, it possesses interoperability with insulin delivery devices and maintains accuracy, as demonstrated in the study, the company said. Dexcom presented the studies during the 14th International Conference on Advanced Technologies & Treatments for Diabetes (ATTD).

Dexcom EVP & CTO Jake Leach said in a press release that,  “Initial clinical data has only strengthened our conviction that Dexcom G7 will build upon the high accuracy standard already established by our G6 CGM system. The G7 is a completely redesigned CGM; our users will get a whole suite of new features that we believe will enhance the customer experience that has become synonymous with Dexcom.”

PharmaCare funds G6
This comes as people with diabetes in Canada on intensive insulin therapy, age two years or older, may now be eligible for provincial coverage of the Dexcom G6 CGM System through British Columbia PharmaCare, reports Businesswire.com.

British Columbia joins Yukon, Quebec and Saskatchewan to offer public coverage of CGM systems under provincial health plans. The announcement marks a significant accomplishment in increasing access to life-changing technology used in the management of diabetes and recognises the impact CGM technology can have on those who require intensive insulin therapy to manage their Type 2 diabetes and those living with type 1 diabetes.

“As a British Columbia-based company, we are thrilled by today’s announcement and the province’s commitment to the diabetes community,” says Laura Endres, Vice President and General Manager of Dexcom Canada. “We have seen the impact of improved access to CGM to truly change lives, and we look forward to continuing our work toward access for all those impacted by diabetes across Canada.”