Alarmed about alarms? Don’t be…. We look at ‘alarm fatigue’ – what is it, how to avoid it, and what to do if you have it. It’s not inevitable, and the right alarms could save your life. By Sue Marshall (a personal account and viewpoint). 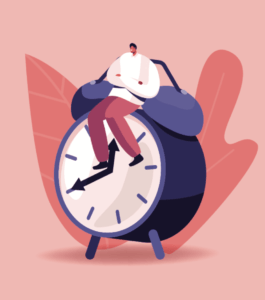 To alarm or not to alarm, that is the question. Or at least, it’s a question for some people. Not all of us have access to technologies that beeps at us – or want it. But insulin pumps and continuous glucose monitors (CGM) are with us, and they are here to stay. So, let’s take a look at what alarms are out there, and which you can avoid (if you wish) or else have to submit too.

Pumps have come on the scene over the last 15-or-so years in the UK, and CGM gradually over the last five years, a major turning point being when it was possible (for those who qualify) to get a FreeStyle Libre on the NHS. Previously, it was only available – and remains available – to those who wish to and can afford to self fund.

I once interviewed someone who said, ‘I used to think I could not afford CGM, now I think I can’t afford not to.’

When it came to the dawn of the new sensor technology, users on both sides – clinicians and people with diabetes themselves – were curious but not convinced. Itw as only in the last few years, as use grew and the technology evolved, that the benefits became much more apparent. Yes, there were mutterings about cost. Any new technology is costly, research and design (R&D) is expensive, and it might not work out for the company undertaking it. So it can be a slow and dogged process to get new products made and approved.

One aspect of choosing a device is whether or not it has alarms, and if it does, how customisable are they around your own needs and wishes? If you’ve not used a device before, then you may not fully understand how it will fit in – all tech involves a  leap into the dark to some extent.

Even choosing a device is fraught with concerns. Half the time you just have to guess – you’ve not used it, so how do you know it’s right for you? It’s easier if it’s an evolution – you’ve used the previous version, you’re just upgrading to the newer one. But when it’s your first time on a pump or CGM (or Abbott’s Flash Glucose Monitoring device, the Libre), then understanding the pros and cons of having alarms set up matters.

Be in no doubt, we are on the ‘nursery slopes’ here, and we are all guinea pigs. But the benefits are proven. They may be marginal en masse, but for some individuals they are massive.

I’ll start with the general, then get to the specifics. The simplest alarm is when you can ask your blood test meter to remind you to test. If you can remember to test before each meal, then there’s no need for you to have an alarm to remind you to do so. If your life is less 9-5, then maybe a reminder is useful.

CGMs have two purposes – keeping track of your glucose levels on a continuous basis, and alarms based on that data. Several devices can now tell you with an aural alarm warning if your blood glucose is are going up or down. This is based on the ‘rate of change’ of your levels, the rate at which they are going up (or down). If it’s moving fast, then the alarm can tell you – alert you – to this and you can do something about it. Going down? Have a little boost – a few jelly babies, a biscuit, a swig of apple juice. Going up? Time to rethink your last carb count – did you underestimate (statistically likely); or is it the almost unavoidable post-prandial high which happens after virtually every meal. Maybe should just wait it out, make sure the insulin you gave yourself has finished its action. Add insulin now, and you could be heading for a low later. Or did you really goof-up and totally underestimate?

It’s hard to judge how valuable alarms are until you’ve had a taste of them. If you are managing OK without them, then likely as not, you don’t need them. The proof is in the pudding, if you’re OK with your glycaemic control and so is your healthcare team, then you may have no need them.

Choosing the right device is a challenge, but your healthcare team can help you. Hopefully they know you, you know them and you can talk confidently with them. My point is – don’t be scared of alarms, they are there to help. Ideally though, they need to be able to be adjusted to your needs. At the moment, some are personalisable, some aren’t.

The rest of this is going to be a bit vague. It will be about the alarms, not the devices.

To do this properly would need a comparisons chart, which I will get to (eventually) I hope it gives you pause for thought so that you are better able to understand your options. Here are six alarms and alerts to consider – bear in mind these go across pumps and CGM, and literally neither has all of these.

Well, that’s easy enough to understand, and it’s an alarm worth heeding. It’s a worry isn’t it that the device delivering your live-saving insulin can run out of puff. As ever, be prepared, have back up batteries as required

That used to be a blood test meter thing, but it’s gone now. Phew. But calibrating is back big time with some of the CGMs, though to trends seems to be that these are likely to be phased out at the technology improves.

We all need to know if we are going high, so we can intervene. The downside is that if your device is set to give an audible sound, then everyone around you can hear it. At the end of the day, who cares if they do? What matters is you being safe; this tech is here to help and advanced warnings about glucose deviations can be extremely helpful, and worth having alarms set up to inform you.

Arguably a more dangerous state, a warning about a low blood glucose level is massively helpful.

These are alerts about your device – they are vital requirements for pump and CGM use. They are not about your control, but the state of the device and its consumables, including insulin, such as:

Useful enough if you need the reminder. For any device, you can set this to your needs.

Fitting alarms around your life is quite big on the wish-list. But it’s not always possible, it’s down to what options are on the device. Most have some level of input from the user, others allow for greater flexibility – the better ones in my view, and over time greater flexibility will become the norm I hope, when did ‘one size fits all’ ever work? If you do find you are getting fed up with the alerts and alarms

If you do find you are getting fed up, your first port of call is to talk to the dedicated Customer Care Lines set up by the device supplier. Not only are these people experts on using the company’s devices, but it takes a bit of pressure off the NHS and you’re more likely to get a faster response too. If that does not sort you out, see if anyone you know uses the same device whom you could talk to. It’s amazing what other people in the community know about specific devices and they may have good advice or work-arounds. But by all means, if you still have concerns, by all means contact your HCP for additional advice and support.

Where alarms have the most impact is at night time. First, they’re just plain louder. Second, if you have a partner then it will affect them too, unless they are game to wear earplugs. But that inconvenience and sleep disruption has to be balanced (it’s always about balance) against the fear of hypos that can prevent people sleeping well and actually having a hypo, which of course is going to disrupt your night.

Being woken by an alarm that telling you you’re going low lets you do something to avert a hypo. If you sleep on your own, then no one else is there if you don’t wake up. It’s swings and roundabouts and down to you to draw the line where you want over safety vs. sleep.

As mentioned, if you’re in a quite place your device might ‘out’ you, telling anyone near who knows what it is to have the same information you have of your blood glucose level. Family hopefully should not mind, though maybe judgemental, ‘what have you been eating?’. Business clients and colleagues might not understand, or you might not want them to know, but usually it’s easy to brush off an alert, or you’ve told them about your kit they’re fine about it. Afterall, if it keeps you able to work, then where’s the problem?

Alarms are about you. They are there to assist you. There is – always a balance* and that’s up to you to assess and enforce.

*the name of Diabetes UK’s long-standing membership magazine, Balance, says it all.