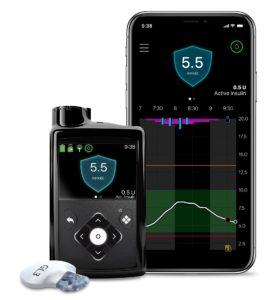 Medtronic received a CE mark for the latest in its line of insulin pumps, the MiniMed 780G, in summer 2020 and from that point started rolling out in the autumn to a few European countries including the Netherlands, Sweden and the UK. The full title of the latest addition to the MiniMed range is the 780G Advanced Hybrid Closed Loop (AHCL) System, and it is able to do automatic adjustments every five minutes (more if you are high) or suspends (or gives less) insulin if you’re low. It means it’s an easier way to stabilise blood glucose levels.

So, it’s a self-adjusting basal insulin pump system, with a new auto-correction algorithm. It has smartphone connectivity and personalised glucose targets, to fit around the individual. Carolina Martin, Therapy Innovation Senior Director of the Diabetes Group at Medtronic, in the Europe, Middle East and Africa (EMEA) region explains, “The launch of the MiniMed 780G is the latest example of how Medtronic uses smart algorithms to improve patient outcomes and simplify decisions for people living with diabetes, leveraging the company’s deep data science and AI capabilities. From smart pump to smart pen*, thanks to the recent acquisition of Companion Medical, our portfolio offers innovative tech-enabled solutions for people on different stages in their diabetes therapy journey.”

The MiniMed 780G AHCL system, approved for use in people aged seven to 80 years old, anticipates insulin needs and leverages the company’s most advanced SmartGuard algorithm to automate the delivery of both basal insulin and correction boluses 24/7, every five minutes as needed. The aim is to help more people with diabetes more easily avoid highs and lows, reach their targets, all with less effort involved. Clinical studies have demonstrated that the AHCL system requires less effort from the user to manage highs and lows, and that outcomes improve even more with a glucose target of 100 mg/dL (5.5mmol/L).

The current system utilizes Medtronic’s Guardian 3 sensor with a Bluetooth transmitter, but Medtronic is already thinking about the future of its CGM technology. Medtronic’s diabetes group president, Sean Salmon recalls, “Medtronic acquired Dreamed in 2015 which gave us the algorithm for the MiniMed 780G pump. We embarked on Project Zeus, that being a sensor that did not require calibration – or at the very least only once a day. It is the same architecture, the same shape and size as the current sensor, but with a new algorithm. Even further down the line, Medtronic is working on another new sensor, this one’s ‘working title’ is Synergy.” 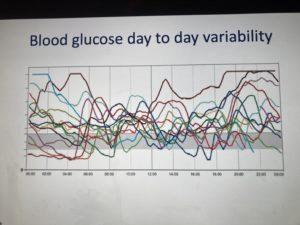 An example of one person’s day-to-day blood glucose variability over two weeks, overlaid.

If you think it’s not long since the last new pump, you’re not wrong. Its predecessor, the MiniMed 670G, came out about two-and-a-half years ago.  Medtronic’s CEO Geoff Martha explains, “The plan was to accelerate diabetes devices pipeline as feedback on the MiniMed 670G was that it was harder to use than its predecessor, the MiniMed 640G. The aim was to eliminate some of the hassle factor, while also adding in new features, such as new connectivity and app.

Ali Dianaty, Vice President of Product Innovation, Medtronic USA, has said: “This pump is much more forgiving for folks when they eat. We are seeing greater than 75% time in range, where the guideline is set at 70%. Also, this pump device can have software upgraded without having to change the hardware, just like a mobile phone – so pumps can get improvements without needing to be replaced. It is been noted in the past that some HCP’s reserve pump usage for the ‘Goldilocks’ patient – someone who is highly motivated and already keeping to the advice given by their doctor. The MiniMed 780G system is easier to use and helps a broader range of patients live a more normal life, safely.”

It’s been established that as many as 63% of people with diabetes regularly underestimate carbohydrates – this is probably a survival instinct, as anyone sensible would want to avoid hypos. The advanced hybrid closed loop system gets rid of that problem. Clinical trials showed that the MiniMed 670G hybrid closed loop did minimise glucose excursions, but as the 780G does not wait to stabilise sugars, it auto corrects on five-minute intervals. Says Dianaty, “This not only provides therapeutic value but also convenience as can be visualised on a smartphone, from where it can also be shared with carers, parents or HCPs.  It also provides more discretion in its use, as the customisable alarms and alerts can be set based around the individual and can be set via the phone app.”

The updated CareLink system allows for virtual/remote follow-ups, which improves matching the best possible therapy to each individual. Adds Dianaty, “We don’t intend to stop here – the aim is for a fully closed loop system, which needs no carb counting or other input by the user.”

Dr Shafie Kamaruddin, specialist in diabetes and endocrinology at NHS South Tees Hospital, has had experience of putting people on to the new pump system. He says, “We ask people with diabetes to hit a very tight glucose range, which is a huge challenge in itself, which can increase diabetes distress. This can then lead to poor compliance. If the person experiences many low glucose events, hypos, they can lose the ability to detect their onset. Plus, no two days are the same. How, then, do we make it easier?”

One factor that has recently come in to play thanks to the use of CGM, is the concept of Time In Range (TIR) which, as well as your six-monthly HbA1c (which is a three-month average of your blood glucose levels) shows how much time you are in range. It’s proving a much more popular way for people living with diabetes to assess how they are doing. Says Kamaruddin, “We hope for people achieving time in range of around 70% or above. The use of insulin pumps has led to fine tuning of insulin delivery and now CGM is becoming an established part of glycaemic control. The MiniMed 670G was the first ‘hybrid’ closed loop system, hybrid as it does include some input by the user, and it was a huge step forward. The new MiniMed 780G raises the bar even further; not only is it automated but it’s also making continuous real-time corrections. This should leave lead to even closer control with increased time in range and decreased time in hypo as well as a decreased risk of long-term complications. It is also possible to do remote monitoring, which has been fantastic in the time of the pandemic.”

People can be reluctant to take more insulin as that increases the risk of hypo, and that might be particularly true of people who do physical work or who feel that their diabetes is not something they want to be seen in the workplace. I had one patient on a 780G for just three weeks who achieved 79% time in range, which we both felt was a huge success.”

Gary Rapson is father to Max who was diagnosed at the age of 18 months. Rapson says, “There followed many years of not properly sleeping. we went from multiple daily injections to combined pump and CGM; it was a big leap, but it made sense. The MiniMed 780G has changed our lives for the better.”

*Not yet available in the UK.

To coincide with the launch of the MiniMed 780G, Medtronic has launched a new Annual Plan for those self-funding the CGM element of their insulin pump therapy.  The new plan, which is also available to MiniMed 640G and MiniMed 670G users provides a compatible transmitter with your Medtronic pump and sensor for 364 days (52 Guardian 3 sensors) at a lower cost of £5/day, broken down into 10 payments and shipments.  It’s available through Medtronic’s eShop – for more information, including a breakdown of payments and how to set up, CLICK HERE.