Second coming: A look at the new FreeStyle Libre 2 sensor from Abbott. 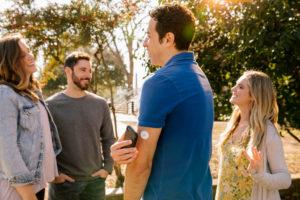 It’s taken a little while to get here but it’s here: the FreeStyle Libre 2 (FSL2) is available on the NHS for people who qualify across most of the nation and from the online FreeStyle Libre shop for self-funders.

Availability of FSL2 in the UK was slower than in other markets, as other markets do not have to negotiate with and navigate a relationship with the NHS. Getting the original FreeStyle Libre on prescription in 2017 was a massive achievement for the diabetes sector. It did take time, but with help from users and healthcare professionals, it got over the line. Now, as products evolve, the company has a relationship in place with the NHS for sensors.”

The newer sensor model is available at the same cost as the original FreeStyle Libre model. While it is comprised of similar components and has features that existing users are familiar with, it comes with improved accuracy and features real-time alarms.

Built on the same established ecosystem, brings three key benefits. First, like the original FreeStyle Libre, FSL2 is discreet, convenient and easy-to-use. Second, it boasts improved accuracy. Third, optional alarms can be generated to warn users if their glucose levels are rising or falling fast enough to warrant the need to take action. The alarms are received on the FreeStyle Libre Linkup app; notifications (rather than actual alarms) are sent to LibreLinkUP (the caregiver app) if the user has enabled sharing.

When the sensor comes out of the box, the default is that the alarm systems are turned off, so that their use can evolve with the needs of the user. Similarly, the existing Libre reader is not being phased out, at least not at this time, as not everyone uses smartphones. There has been a growth in the use of technology in diabetes care, but that it’s not the case for everyone, so the reader is offered alongside the smartphone apps, with updated readers being replaced for free for those who need them. Although the announcement was made at the end of 2020 that the UK was to get access for FSL2, it did take time for the numerous GP’s commissioning systems to be updated. Abbott’s aim is to raise awareness that there are two models now.

The system is proven as a safe and efficient way to replace blood glucose monitoring with very little need for additional blood tests. The user’s glucose data is visible after scanning the sensor. This is an evolution of the system; it has better accuracy especially at the lower range and can ‘alarm appropriately’. Sounds associated with the alarms can be customized, which is to say there is a choice of sounds or can put on to vibrate.

You might be wondering why the alarms are optional, why wouldn’t everyone want them? But the fact is that they are not for everyone. Alarms are used more by certain people: those who don’t mind beeps letting them know what’s going on, in cases where the person with diabetes has low hypo awareness, for children – especially at nighttime, or someone who looked after by a carer who needs to be made aware of a potential high or low. So it’s a choice.

People with diabetes who are not existing users but who are interested in finding out more about the technology are being asked to wait until their next appointment with their HCP to see if they qualify. Existing users can choose to migrate to the newer sensor at an appropriate time, but they don’t have to. Meanwhile, there is availability from the FreeStyle Libre shop for those who self-fund and at the same cost.