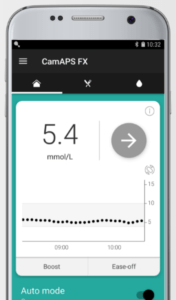 A closed loop insulin delivery app? What could that possibly be? Welcome to the CamAPS FX, which I am about to explain (I hope!). By Sue Marshall.

The CamAPS FX, the world’s first closed loop insulin delivery app, has been developed and researched over the past 15 years by Professor Roman Hovorka and his team at Addenbrooke’s Hospital in association with Cambridge University. The diabetes charity JDRF which has been funding this research for many years hosted a webinar in July 2020 where Professor Hovorka explained the app and took questions.

The webinar was presented by actress Nina Wadia, whose son was diagnosed two and a half years ago with Type 1 diabetes, after passing out on an airplane on the way home from a holiday. Wadia recalled, “We went to hospital when we landed and where nurse had rather thoughtlessly said, ‘don’t you know your son has diabetes?’ Thankfully, later, a consultant calmed her down, sat her down and calmly said, ‘it is manageable.’

“At that point,” Wadia remembers, “I met the mother of another child with diabetes at school, who told me that I needed to be aware of JDRF and its work to focus on prevention, treatment and cure. Now he’s a robust and healthy 13-year-old and I am extremely interested and happy to support JDRF and its great work.”

Also attending the webinar, Karen Addington, CEO of JDRF UK, commented on the new app describing it as, “The world’s first artificial pancreas closed loop app.” Also on the webinar was Rachel Connor, the director of research and partnerships for JDRF, who explained that the app, “Mimics the healthy human pancreas.”

Professor Hovorka, the app’s lead inventor, explained, “It’s an app. It sits on any standard Android smartphone, so long as the phone model can work with the Dexcom app which pulls data in that the CamAPS app uses. But it can also handle the insulin delivery.  It’s possible to bolus from the app itself, direct from the phone. This means that your insulin management can be very discreet – extremely handy, but what is key is that it learns. This is important, as we are all different. We believe that this difference, individualization, is another factor that makes the app option stand out. A user can ‘ease off’ for exercise, for example. It can make Type easier to manage, which we have shown in the research and user feedback.”

He continued, “Inherently, as the system relies on CGM, users get all the other benefits of CGM, which in the case of Dexcom’s CGM means no finger pricks. Meanwhile, it sends data to the cloud for easy sight of information for parents and carers.” 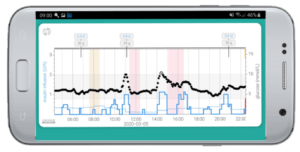 As we are all aware, knowing about a piece of diabetes tech is one thing. Getting access to it is another. So who might want to use this app, is it aimed at any group in particular? Hovorka says, “At the moment, it’s been approved for anyone over the age of one year old. At the moment, they need a smartphone, Dexcom CGM sensors and a Dana RS insulin pump. In the future we expect the app to work with other CGM and pump devices. From the point of taking on the app, it begins to modulate insulin delivery, all the time. It’s a much less intrusive system than the other ‘closed loop’ or ‘artificial pancreas’ systems. Not just in our view, but it’s been the view of people in the clinical trials who have had experience of using other systems. You should expect a full night’s sleep without interruptions. You can expect improved control. People on the clinical trials have said using the app has been a life changing experience. One person said they’d had the best night’s sleep in 15 years after using it. That would have been partly due to various parameters that saw an improvement. We have seen an average of 10-15% more time spent in range with less time spent in hypo as well as a lowering of HBA1c values.”

All this has been proven in clinical trials and via research. JDRF supported these with research grants, as well as being the reason for this research as, says Hovorka, “We share the desire to ease the burden of people living with Type 1 diabetes.”

Currently, the app is available for anyone who wants to self-fund. So, what about reimbursement on the NHS? “In this country, as the system works at the moment, we have to make individual representations to each CCG. We have made progress in Southampton, Nottingham, Manchester, and some clinics in London. It is challenging but approaching funding teams one by one is currently the only way. Decisions are made locally about the adoption of technology.” 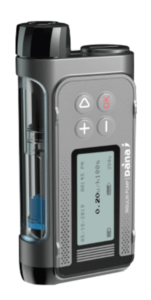 The app developers are currently seeking reimbursement on the NHS for the app as a closed loop system it is approximately a third more for affordable per year per person than its nearest close loop competitor.

At this point in the webinar, JDRF’s says Rachel Connor adds, “JDRF is pushing for national decisions to be made on new products which should make life easier for people with Type 1 diabetes until we get a cure. Usually with good research, clinicians are quickly persuaded. It’s a little harder with commissioners, as they may not know Type 1 diabetes in detail. But research data is not enough, we have to campaign too. People with diabetes need to ask their diabetes teams about the tech; they probably won’t come to you about it, so go to them.”

JDRF has an initiative called Pathways to Choice, the purpose of which is to make it as smooth as possible to get a choice regarding diabetes technology, no matter where they live. Connor says, “We are keen for people to feel that they have, and actually have a choice. The idea is for an ‘open protocol’ system, where you can pick and choose elements that work best for you. We’re all different and have different preferences, so you need to work with what’s best for you. We’re not there yet but we’re getting there.”

Connor referred to a movement called we are not waiting, explaining, “This is a group of tech-savvy individuals who have done DIY artificial pancreas systems in their homes and workplaces, creating ways to manage glucose better using devices and creating code to make the devices communicate to each other. The movement drew attention this area. It is a also challenge to the NHS that there are do-it-yourself artificial pancreas systems (DIYAPS). It can be seen as a problem that that these have not gone through a regulatory process. However, JDRF in the US and the UK has been urging diabetes teams to support people who choose to use DIYAPS systems, but also to work with them, and with researchers like Professor Hovorka, to get these systems past the regulatory proceedings in order that those with less confidence in handling diabetes technology on their own can still have access to it if it has been proven to work, improving control of the condition ­as well as quality of life for the individuals.”

Connor also commented that, “Faster insulins are likely to help improve APS systems, as current insulins have ‘long tails’, which is to say they are still acting hours after taking them. ‘Insulin on board’ is another factor that people with diabetes have to think about. Faster insulins mean not just that the insulin action comes on faster but also the end action – or ‘stop’ – is faster. That allows APS systems to be more ‘on it’. Research into and development of faster insulins is another area where JDRF is supporting research.” 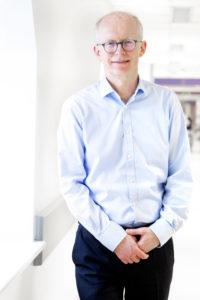 Back to the app, how much of a challenge is it to use? Says Hovorka, “If you can use a smartphone, then you should be able to handle the app. A major part of the research focused, was to make it very easy to be trained on, and then easy to use. You do however need to be able to use the Dana RS insulin pump and Dexcom CGM sensor. Younger groups, particularly teens, adapt to it very quickly.”

Ease of use
Many people feel that one of the great advantages of this app is that it is so simple to set up.  You only have to put in two parameters: your body weight in kilograms and your average daily insulin use. From that point on, so long as the sensor and pump are talking to each other, the app will immediately start modulating basal dose delivery. Says Hovorka, “The app is highly adaptive for daily insulin needs, including night-time insulin needs. It can address the sometimes challenging post-prandial (after meals) insulin needs, independent of the basal dose settings.”

The www.cambdiab.com website is an online training portal that carries essential training for both healthcare professionals as well as people with diabetes themselves. There is even a carb-counting refresher plus a module specifically aimed at schools there is a reference point for teachers as as to what could be required of them for any child or student studying at their institution. The bottom line is that as the app seems to make diabetes control more stable, so there should be less need for anyone to be involved in caring for the person with diabetes than previously.