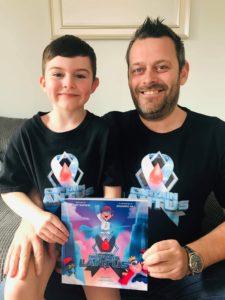 Gary and Sarah Rapson’s son Max was diagnosed with Type I diabetes when he was just 18 months old. Now seven, Max has been on a Medtronic 640G insulin pump for nearly four years, augmented with a Medtronic CGM sensor.

According to his father, “This pump has been a game changer. We felt we could not adequately control his diabetes with multiple daily injections (MDI). He due for a pump upgrade and will progress onto Medtronic’s 780G augmented hybrid closed loop system. When Max was first diagnosed myself and my wife took turns – one of us would wake up on the hour, every hour, through the night to check on him. Obviously back then we had to look after all aspects of his care, but now he’s started to do a lot of it himself. Having said that, we’ve noticed that on a Saturday his pump alarm will go off and he’ll wait for us to come in and turn it off – he just yells out, ‘My pump’s going off, my pump’s off!’”

Going back to the beginning, Gary Rapson recalls, “When he was still a baby, we’d noticed he’d been wanting to drink a lot, and was going to the loo a lot. He had ridiculously soggy nappies all the time. When we took into the doctor. He did ask does anyone in the family have diabetes? We said no. The doctor didn’t do a blood test at that time. The GP seem to think it was something that could be solved with antibiotics, which is what he sent us home with.

A few days later I was at work when my wife, Sarah, called me saying thath Max was very unwell. She’d been watching This Morning with Dr Chris Steele who had been talking about diabetes. The penny just dropped. I came straight home, we took Max to the GP, who told us to go directly to Stafford Hospital at which point he was comatose. They got to grips with Max’s condition pretty quickly but he was in a coma for 48 hours which was incredibly scary. It was one heck of a learning curve.”

New dawn
In the present day, how did the book come about? It turns out that Max’s class had been learning about books and Max had said to his teacher, “I’m going to make a really good book.”

When he came home, he asked his dad to help him. Says the elder Rapson, “Max loves The Avengers superhero characters. He said, ‘I am like Ironman, he stays alive because he made something to keep his heart going. It gives him powers, just like me. My pump gives me powers!’”

We started piecing together a story and looked at ways to fund getting a proper book actually published. We put it on Facebook, where we now have 2,000 followers. The characters live in Beta Town. It’s protected by an Insulin Cube. The villain in the story wants to pinch the cube because it is valuable. But superhero Captain Lantus is there to protect it. The baddie is called King Carb. As he’s a kid, Max relates to fictional characters like superheroes. He thinks they’re real. It made sense to take that idea forward with him and his diabetes. He’d mentioned Iron Man, and I thought he was absolutely right.”

Taking the initial idea further, the Rapsons contacted a publishing company, who said they loved the idea. Then they found an illustrator. Recall’s Max’s dad, “In many ways lockdown has helped us to keep our focus. The diabetes community has been amazing. It’s been really exciting to have such a positive come out of what could have been seen as a negative. It cost a bit to do, but it will be priceless when he can take it into school and show his teacher his friends.”

Hospital support
Max’s father explains the reason he’s gone so far supporting Max’s idea was that it took him back to when Max first went on a pump. Max’s diabetes team at the hospital fought for him to get a pump. He was three at the time. I think we were all very apprehensive, as well as very hopeful about what the technology could do to improve Max’s control and his long-term prospects. He was frightened – sobbing. Myself and my wife felt we had to learn everything again from scratch. However, the diabetes team has been brilliant, they are like friends of the family. We had all the brochures out, all the literature spread out on the floor, getting to grips with it. Then suddenly, for the first time since adapting to the pump, we realised that we don’t have to be so afraid anymore. It made life easier for all of us.”

Max and his parents are working on part two of the story. They sold 200 copies of the book pre-launch through Kickstarter, and it’s due to be available on Amazon soon.