From boomers to zoomers

The baby boomer generation – people born from 1946 to 1964, during the post –World War II baby boom – have been getting to know digital devices and delivery (whether they liked it or not) thanks to lockdown. By Sue Marshall 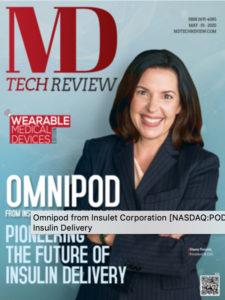 Insulet Corporation’s CEO Shacey Petrovic on the front cover of MD Tech Review in the US.

If anything positive can be said about lockdown, it is that it gave the medical community and those who interact with it the necessary sense of urgency to really get to grips with digital ways of delivering healthcare into the home for as many patients as possible for whom it could be safely achieved. Whereas many might have been wary of moving to digital could lead to possibly losing contact with healthcare providers, the presence of Covid-19 has forced us all to understand digital delivery better and engage with it more in order to stay well.

Once called telehealth, which now sounds archaic, many of us have over the years moved to calling an HCP when we needed some help, or sending them an email instead of trying to go and see them in person. It’s far easier if you have had a great one-on-one relationship with your HCP, so you’re not talking to a stranger who knows nothing of your background.

Many of us have downloaded an app we thought might help us – perhaps with tracking blood sugars or giving info on the carb content of food, getting the hang of using smartphones and tablets along the way. More recently, you may have done a video call with their GP or other healthcare professional.

Personally, I’ve gone from the odd FaceTime conversation with a member of the family living overseas to doing lockdown lunches and birthday ‘parties’ on Zoom. I’ve done work meetings on Team, Skype and whatever else is now being used by businesses the world over, as well as joined in some brilliantly organised online get-togethers of pretty big groups of my ‘diabuddies’ which have been very enjoyable.

I’ve also been able to report on how suppliers (including the NHS) specifically in the diabetes sector have turned themselves inside out to help support people with diabetes in their homes which has been both humbling and reassuring. There has been a sincere push to get people living with the condition to help themselves from home – with ‘remote’ pump starts and access to wearable devices in general being improved in order to allow HCPs to see patient data – while both are in their own homes.

The following is a round-up of news about digital diabetes tech, mainly from the US then more UK-related towards the end.

Fast growth
You can get an app for virtually anything now, and your watch is unlikely just to tell you the time anymore, while other devices are also creeping in allowing anyone who is interested in tracking aspects of their health, not just blood glucose levels.

In the US, but also in Europe, Fitbit has received regulatory clearance for its new electrocardiogram app to track heart rhythm and flag signs of atrial fibrillation. The regulatory nod brings Fitbit up to speed with other manufacturers like Apple and Samsung, which have offered EKG tracking in their smartwatches since 2018 and early August this year, respectively. It’s a key capability for the smartwatch Fitbit Sense, which launched in late August. The app will be available for the watch in October in the US and select countries in Europe and Asia.

In a news commentary by American website FinancialBuzz.com it was noted that, “Wearable devices have now become one of the fastest developing segments of the technology and medical technology industries. Wearable devices were designed to track real time data on various activities of its user and can be worn on the body with ease. Generally, these devices include analog-watches, smartwatches, glasses, fitness trackers and others.

“More recently, synchronization of such devices with smartphones has become an evolving technology with a numerous new features being incorporated into the devices. This increase of diverse applications is a major driver for this market’s growth. Furthermore, the implementation of the Internet of Things (IoT) that is used for the development of new features among smartwatches has created an essential transformation in the watch industry.

“Medical wearables are built to track vital signs and other health indicators, including calorie intake, cholesterol levels, heartbeat rate, blood pressure, glucose levels, sleeping patterns and more. Now, the rising occurrence of chronic diseases, along with increasing mortality rates, is a major area of concern among people as well as government organizations. Therefore, healthcare providers are offering personalized care including continuous and remote patient monitoring. These medical devices can be worn 24 hours without affecting the user’s routine life.”

Reimbursement in US
In the US, Abbott has won Medicare reimbursement for FreeStyle Libre 2. As reported by Sean Whooley for Drug Delivery business, “The integrated continuous glucose monitoring (iCGM) system met the codes for therapeutic CGM systems used for coverage by the US Centers for Medicare & Medicaid Services (CMS), making it accessible to all Medicare patients with diabetes who meet the eligibility criteria. Abbott’s FreeStyle Libre 2 includes a sensor worn on the back of the upper arm for up to 14 days, using a handheld reader over the sensor to provide real-time glucose readings, trend arrows and eight-hour history to help healthcare providers and users make informed treatment decisions. The system also includes real-time alarms and minute-by-minute glucose measurements, while Abbott touts it as the longest-lasting self-applied iCGM sensor currently available, eliminating the need for fingersticks and costing a third of the price of other CGM systems.” Read the full release here: http://bit.ly/DDB_Libre2_Medicare

In another report for the same website, Whooley reveals that “Enable Injections completed a $25m credit facility from Oxford Finance LLC. Cincinnati-based Enable Injections said in a news release that the funds are earmarked for supporting the scaling of high-volume manufacturing and the achievement of major inflection points as it moves toward commercialization of it’s enFuse on-body drug delivery device. This is a novel technology for delivering therapies to patients outside of a clinical facility. The on-body drug delivery platform is designed for subcutaneous delivery of large volumes reaching up to 50mL at the time and place of the patients’ choosing.”

In an interview for the magazine, Omnipod’s president and CEO, Shacey Petrovic – who also bagged the front cover of the magazine, stated that the Omnipod insulin pump had been designed with the user in mind, and that the company was aiming for a pay-as-you-go business model by eliminating complexity and restrictions. Read the coverage here:  http://bit.ly/MDTech_Petrovic

With healthcare systems worldwide struggling under the demands of the current pandemic, solutions for remote medical care are increasingly seen as vital. The NextDREAM Consortium, a group of participating clinical sites including Joslin Diabetes Center of Harvard Medical School, has carried out a study into the efficacy of AI technology in remote diabetes care. The results of a multi-centre, multi-national, six-month study were published in the medical journal, Nature Medicine, and substantiates the efficacy of DreaMed Diabetes’ Advisor Pro solution. This is the first time that Nature Medicine has publishing a clinical study that evaluates the effectiveness of AI in medicine, marking a major milestone for the technology as it becomes more viable. The study concluded that optimizing insulin pump settings with an AI-support system, produced similar healthcare outcomes to those achieved by physicians with diabetes expertise. DreaMed’s Advisor Pro software provides patients with personalized optimization of their insulin therapy management, driven by cloud-based technology utilizing artificial intelligence for swift data analysis and swift treatment. The solution paves the way for implementing AI across healthcare, enabling deep and accurate analysis while freeing up doctors to treat patients instead of data.

“This Nature Medicine publication is an important first step toward the implementation of AI-based decision-support technology as part of the standard way we manage the insulin therapy of people with diabetes,” says Prof. Moshe Phillip, the Director of the Institute for Endocrinology and Diabetes at Schneider Children’s MC in Israel & the nextDREAM Consortium Coordinator. “With the Advisor, healthcare providers will be able to use an easy and clinically effective decision-support tool that will give them more time to interact with their patients, while making regular clinics visits to the doctor more efficient. For people with diabetes, it will ultimately mean 24/7 access to personalized medical advice, a kind of ‘expert diabetes physician in your pocket,’ that will bring people with Type 1 diabetes greater balance and an improved quality of life.”