What’s the point of the point?

We chat to Chris Avery at Nemaura Medical about how we report blood glucose levels and HbA1c. By Sue Marshall 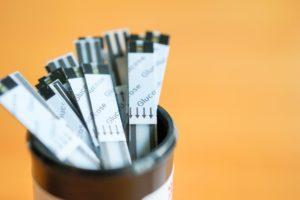 I was five when I was diagnosed with Type 1 diabetes but didn’t get a take-home blood test meter until I was 17 years old. Prior to that, there had been trips to hospital to get blood drawn, once before breakfast, once before lunch, then once before teatime. Later, there was the (relatively) fun chemistry set that involved plopping tablets into a test tube with some of your urine and it fizzed up and changed colour. You’d compare that to a chart to see if it went blue it was good, it meant you were low. Looking back, I hate to think HOW low, these were rough old tools, if there was no glucose at all, isn’t that a hypo? Or it could go as far as dark orange which was bad, this meant you were high.

It got a lot posher with Diastix, a strip that you’d pee on and the tip changed colour; the chart had a wider colour range. Then one day my dad turned up from a business trip to the US with a blood test monitor. It was the size of a brick, was kept in the sock drawer, and took about five minutes to count down and give you a reading. Of course, it also meant finger-pricking and all that involved.

After that, there were relatively slow changes but vast improvements in size, ability and design of blood glucose meters. Oh, the utter joy of a colour screen! Of adjustable lancing depths! Of meters with memories! That could be downloaded! That could advise you on dosing!

Very testing
Don’t ask me how many blood tests I’ve done. Rough calculation – a lot. Five a day for a few decades before going on a sensor. Even so, sometimes it’s quite nice to look back at how things evolved and improved. I caught up with Chris Avery, who’s spent all of his career in healthcare and much of it in diabetes care, specifically developing, distributing and educating about blood test meters – now called blood glucose monitors, or BGMs. Another frequently used term is SMBG – self-monitoring of blood glucose, i.e. what those of us with diabetes do.

We reminisced about the way things have moved on, and shared tales of our experiences along the way, I used the meters and he promoted them. A topic cropped up about why we measure blood glucose the way we do. Why to one decimal point? Why not a round figure, or a more detailed one?

Avery, now with Nemaura Medical which is soon to launch the sugarBEAT sensor for people with Type 2 diabetes, said, “Looking back at history and considering what was available in the 1970/80s, we still had test strips which could be visually read with colour charts and also used in reflectance meters. The colour chart continued to provide a double check that the meter was reading correctly. Because meters were expensive not everyone had one, many continued to use the visual colour chart on the bottle of strips. The ‘colour block’ range was different for the various brands.

“The Supreme bg system was one I co-developed in the late 1980s. This brand had a scale of Low, 2, 4, 7, 10, 13, 22, High. If the colour was between 13-to-22, the user could estimate a mid-point of 17mmol/L, for example. The important point to note is colour charts had no decimal place and in fact people were taught to not even estimate any closer than halfway between two colour blocks.

“The very first BG meters, such as the Eyetone from 1972, displayed results in a way similar to a volt meter and needed to be plugged into the electrical mains supply. Portable, battery-operated meters were not widely available until the mid-1980s and became more affordable in the 1990s.”

But what was the point of the point? Avery adds, “I can only guess it’s because of the following reasons. First, meters were accurate enough to do so. Second, because of the conversion from mg/dl to mmol/L units in the UK.”

Avery ventures further, “If the 9.4mmol/L result was rounded down to 9mmol/L, then you are introducing an error of 4.3% (from 9.4 to 9). Hence, I would guess that this is the real reason why we have mmol/L given to one decimal place. The decimal place in mmol/L units is also important when the goal is to meet the clinical performance standards required for modern glucose systems. The current ISO15197 standard states that 95% of the BG meter results above 5.6mmol/L (100mg/dl), when compared with a lab reference system, must be within +/- 15%. Therefore, as per the example above (9.4mmol/L) if rounded down to remove the decimal place you have a 4.3% error.”

So, Avery’s career path has moved from blood glucose meters to sensors. His new concern now is what is the point of five (on a good day) blood test results put on a chart during a day? The old log-books that were used for so long, because that was all we had. Without those, doctors had no idea what you were doing with insulin dosing. A range of single points doesn’t necessarily inform you if glucose is going up or down.

Says Avery, and I agree with him (as anyone would). “The direction of travel is important and is now provided by modern CGM systems. Traditional SMBG can’t tell you how high or low your glucose went, unless by chance you test at the exact time of the peaks. By comparison, CGM systems capture all of that and then provides a report giving the user their Time In Range (TIR), a value that people with diabetes are increasingly preferring over the old HbA1c three-month ‘average’. So, the question then becomes how valid episodic testing is when CGM is available?”

Hold on. Not everyone wants sensors. Then many who do want them do not have access, they can’t afford them or don’t quality for reimbursement, quit apart from which even some HCPs don’t quite ‘get’ their value.

The understanding of ‘cost effectiveness’ will probably continue to drive this argument in the coming years. Yet anyone with any form of diabetes is likely to benefit from CGM data and the insights it can give about their diet and other lifestyle choices.

For more on the history of blood glucose meters, see diabetes book.