Patch us in! Dexcom’s president, Kevin Sayer, on what else can be gained from CGM sensors

Dexcom’s president, Kevin Sayer, on what else can be gained from CGM sensors. By Sue Marshall. 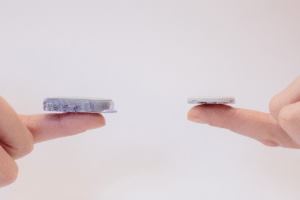 The current Dexcom G6 (on the left) and the proposed G7.

There has been more news from the Dexcom camp. As recently reported, the on-body CGM device, the G6, has achieved a CE Mark for being worn on the upper arm. Dexcom G6 CGM System has also received the CE Mark for use during pregnancy in the EU, and will be available soon, starting with the United Kingdom shortly (launch has been delayed by the coronavirus pandemic).

Glucose levels are hard to manage in pregnancy due to the increasing need for and resistance to insulin. CGM is a means of measuring glucose levels continuously throughout the day and night and can provide short-term insight into the effectiveness of diabetes interventions. With the Dexcom G6 CGM due to be available for use during pregnancy, pregnant women living with Type 1, Type 2 or gestational diabetes can have their CGM data readily available, which can help make their diabetes easier to manage leading to improved outcomes for both mother and baby. Furthermore, with the Dexcom G6 app, they can share their glucose information with up to five people who have the separate Dexcom Follow App. This additional feature enables family and loved ones to remotely monitor patients for extra peace of mind. It also provides ease of management when pregnant and sharing health data with HCPs.

Helen Murphy, MD, professor of medicine at the University of East Anglia in Norwich comments, “Women with Type 1 or Type 2 in pregnancy or those with gestational diabetes usually require six or more blood tests per day. These are required during the night, before meals, as well as after eating meals and snacks. Dexcom CGM eliminates the need for finger-prick blood tests and provides patients with regular updates. This allows them to manage their glucose levels with confidence during pregnancy and helps them to deliver healthy babies.”

Beyond glucose
Specific goals, such as gaining a CE Mark for use during pregnancy, have been achieved based on-long term planning and strategy by Dexcom. Moving forward, part of the push will be to inform users and caregivers that continuous monitoring is not just about sensors, it extends into telehealth, the latest incarnation of telemedicine (or even advice on a phone call).

As data moves from your CGM sensor to an app on your mobile phone, it then goes up to servers where it can be accessed by GPs and other HCPs who can then offer advice on your ‘real time’ data. They can do that from the office, or wherever else they may be based (marvelous in these unusual times). Data is also shareable via Dexcom’s CLARITY app.

Speaking to Dexcom’s President and CEO, Kevin Sayer, he explains, “When we started, we decided on some pillars to build the company on. Many have proven to be good choices. One of them was that we would actively pursue connectivity. Dexcom was the first CGM to connect to a mobile device, and the first to get FDA approval – in fact we have had a series of firsts with the FDA. It is true however that we were perhaps a little too idealistic. This is back in 2015 and there was a learning curve. People do drop phones, phones run out of juice, a phone’s performance can be impaired by cold and heat, and so on. Our devices had to adapt around circumstances like that, what do you do if you break your phone, now how do you see your data?”

The latest phase of the CGM revolution is integrated CGM (iCGM), where sensors are being used to help automate insulin delivery in pumps, further leveraging connectivity (or as it is also often referred to, interoperability or IOP). Says Sayer, “Dexcom is the best-in-industry in terms of accuracy and performance. You can rely on it and it doesn’t need calibrating, which makes for a much easier experience for the user, and they can share their data with whomever they want to. That means the person with diabetes can get further analysis from the data by talking to advisers.”

Plenty of proof
Sayer explains, “There had already been plenty of proof as regards the benefits of using CGM in pregnancy, but it had to be proved with a study in order to get the mark. In fact, we’d advise that women do not stop using it when the pregnancy is over. Early motherhood can be pretty chaotic, having a sensor on will help to keep control of the mother’s diabetes, allowing the mother to get on with looking after her baby. It is also possible that sensors can be used as a diagnostic device in pregnancy. If a sensor is worn, it could pick up on gestational diabetes, for example.”

At the moment the method to establish diabetes is usually a glucose tolerance test. Without a doubt this is a bit of a rough way to go about it. Ideally it would be good to make a diagnosis without having to put somebody, who potentially has diabetes, through a test that involves them swallowing huge amounts of glucose in order to prove that they can’t tolerate it.

“Additionally,” says Sayer, “Once you are on sensors, you are immediately talking about how much time is spent in range (TIR) as opposed to an HbA1c test, which is a three-month average. That really isn’t that helpful in pregnancy.”

Interoperability
The system was designed from the beginning for integration, the idea that data is put into a platform where people can easily access it. “The data format used is universal,” says Sayer, “So it’s easy to pull the numbers in. Dexcom is available to be integrated into any other device that allows access. It is already integrated with Tandon’s t:slim X2 insulin pump. Next will be the Omnipod Horizon, then Lilly’s new connected insulin pen (it’s already connected in the US).”

The next generation of G6 is the G7 also due out in 2021, however at the moment studies are obviously on hold, so there will be a slight delay in the launch.

People in the UK are unfortunately highly aware of the fact that most sensor use is not supported by the NHS. The majority who are on CGM pay for it themselves (the term is to ‘self-fund’). Of course, not everyone can afford sensors as the costs presently stand. But part of Dexcom’s long-term plan has been to bring the cost down in order to increase access and uptake of its sensors.

“The truth is that people perceive sensors as costly, but they are not,” says Sayer. “The sooner you can diagnose someone, the sooner they can be treated and the less impact the condition will have on them in the long run, which means less cost overall, both in terms of money but also quality of life – avoiding amputations, loss of work and all the rest that badly controlled diabetes can bring. New patients get CGM immediately in the US, it is seen as a game changer. And as for the user experience,” adds Sayer, “If anything does go wrong, we tend to know about it pretty quickly – our customers tell us, we listen, and we react. Our aim is for increasingly seamless and helpful support.”