Nothing beats a blood test (Part 1) 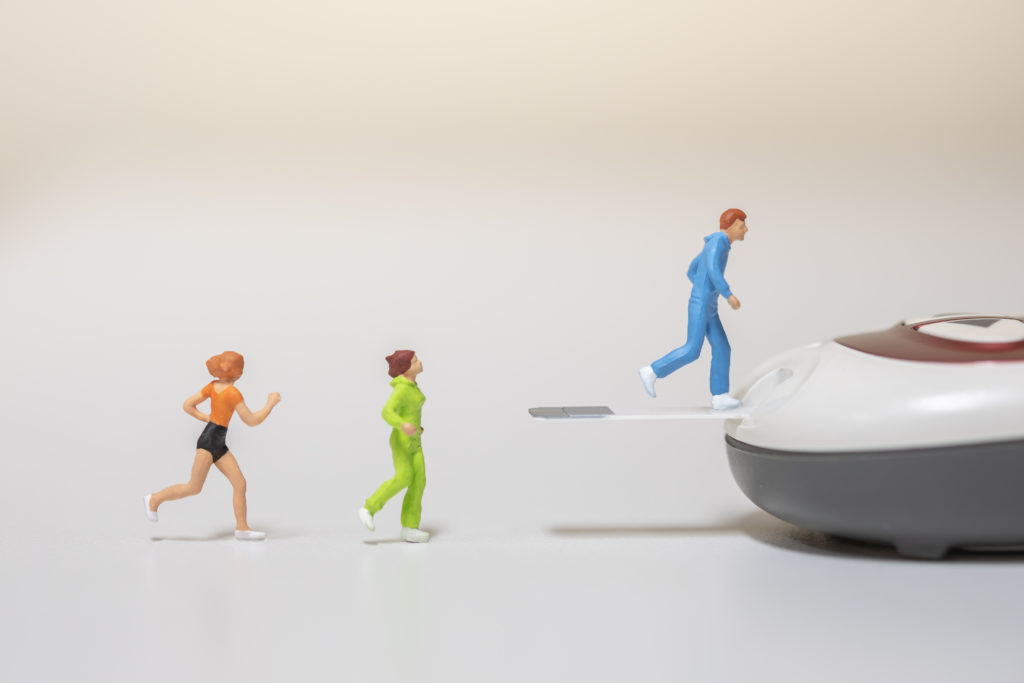 While CGM and other on-body sensor technology continue to make waves in diabetes care, many of us are still using relatively old-fashioned ‘finger stick’ blood testing meters. Here’s an overview of the meter market, by Sue Marshall, editor. 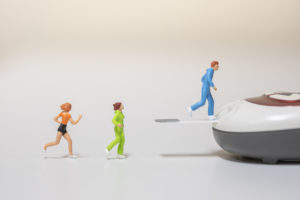 The lancing device, lancet, fingerprick, test strip and meter combination has been tried and tested over the last 40-odd years with those who qualify being able to get strips on the NHS and test as directed, or at will. However, over time more and more companies wanted a piece of the action – with one-off meter costs then a lifetime’s use of test strips by a patient sounded like a basis for a business. Today there are around 40 different blood test meters (more accurately blood glucose meters) available in the UK alone.

As is the way in business, the innovators which had invested in research and development ended up leading the market, only for the market to become over run by lower-cost competitor products, eventually for us to end up with the situation we are in today with CCGs limiting meter choice and access to strips in order to keep a grip on costs. Cost of test strips have become squeezed, which has lead in the end to a loss of choice and a reduction in innovation in the blood test meter sector.

Having said that, what more innovation could be possible in blood test meters? We may have reached the pinnacle of what’s possible with some of the clever ones out there these days.

When push comes to shove, all kit can fail, including blood test meters. But when the higher-end CGMs give someone difficulties (like, say, they knocked off their last sensor and need to reorder), then they can always resort to a blood test to find out where they stand in terms of blood glucose levels. Plus, some of the CGM systems out there need blood tests to calibrate them, meaning that the CGM wearer is still obliged to blood test around three times a day.

AN IDEAL WORLD
The iDEAL group is a multidisciplinary team of healthcare professionals and people with diabetes which has presented the government with a White Paper: Current Challenges in Diabetes Care and How to Address Them. According to group member Professor Anne Phillips, “Our position statement was submitted to NHS England in February2019 for the consultation on prescribed items for those living with Type 2 diabetes. The fundamental points we make surrounding accuracy and safety, as well as education, are equally relevant to people with Type 1 diabetes.”

BLOOD TEST METERS
Here follows an overview of some the latest global innovations showing how markets are changing as regards access to meters and strip-testing, plus some highlights from old as well as new suppliers as to meter choices in the UK today. This is not a comprehensive list. 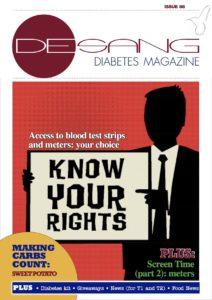 NOTE: Check with your GP before you invest in a meter, as they may not support that meter’s test strips. And don’t forget, one important factor when it comes to blood testing is that if you like your testing kit, you’ll use it. So liking your blood test meter is a must. See our Know Your Rights feature about accessing test strips. If you have reasons why you want to use a particular meter, you need to make that clear to your consultant or GP. This might be issues about fiddlyness, convenience, difficulty doing tests at night when low, etc.

ASCENSIA DIABETES CARE
The company’s Contour Next One meter offers a ‘second-chance’ sampling feature really is something that we get feedback on related to testing. Plus the Contour Diabetes App also has structured testing feature to help get the most out of blood glucose testing.

Last year Ascensia Diabetes Care announced that the Contour Diabetes app had been updated to enable seamless integration with Apple Health. Connectivity between these two apps means users are able to select to share blood glucose readings and carbohydrate data from the Contour Diabetes app with Apple Health. Once this feature is enabled by the user, data from the Ascencia’s app will automatically transfer and be visible in the Health app in its Blood Glucose area. In addition, users can opt to share data that has been collected by Apple Health with the Contour Cloud. 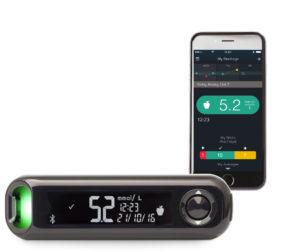 Many people with diabetes are already using Apple Health as the primary application to track their health and this update is designed to make diabetes management easier by providing users with the option to automatically transfer their blood glucose and carbohydrate data. This upgrade is the result of feedback from users of the Contour Diabetes app via App Store reviews and social media. To pair with Apple Health search Contour Diabetes app in your preferred search engine.

Ascensia has also presented clinical research that demonstrated that use of the Contour Next One blood glucose meter in combination with the Contour Diabetes app can reduce the likelihood of hypos. The study found that meter-and-app usage for more than 180 days was associated with a statistically significant decrease hypos in users, suggesting that the system can help them manage their condition more effectively.

The study examined anonymized data from 11,341 people with diabetes from the UK (3,905 people) and Germany (7,436 people).  The meter transmits blood glucose readings to the app via Bluetooth technology on a compatible Android or iOS device. The app analyses readings received from the meter to identify patterns and provides personalized guidance for diabetes self-management based on the well-researched Information-Motivation-Behavioural Skills (IMB) model of health behaviour change. The Contour Diabetes app is available in the Apple App Store (iOS) and Google Play (Android).

To see if you qualify for a free Contour Next meter, click HERE. 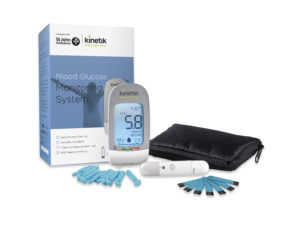 Kinetik Wellbeing has newly entered the UK arena with a blood glucose monitoring system. The company says, “At Kinetik Wellbeing we believe that technology has an important role to play in making all of our lives better. Our award-winning, affordable and accurate range of products allow you to independently take control of your health and wellbeing in the comfort of your own home or when you are out and about or at work. We looked hard at designing an attractive meter that was not clunky or plain.”

Kinetik Wellbeing has an association with St Johns Ambulance, the leading first aid charity. SJA had sought partnerships with medical device providers and after a tendering process, Kinetic Wellbeing was chosen as the charity liked the company’s products and approach. Now they are ‘working together to deliver healthcare in the home’, with SJA providing several first aid guides, including one on what do to in a diabetes emergency, such as someone having a bad hypo.

Kinetik Wellbeing blood glucose monitoring system and blood glucose test strips are £24.99 each. To buy one set and get a set half price (£37.49 instead of £49.98) – enter code 2XSTRIPS Buy three sets of Test Strips for £14.99each – enter code 3XSTRIPS. 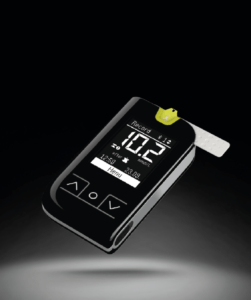 Ypsomed’s diabetes brand is called mylife (sic), to which it has recently added the Unio Neva which can work in combination with the mylife YpsoPump insulin pump. Both devices have Bluetooth connection and can send data wirelessly to the mylife app and software. This means that the user can combine blood glucose data and pump data, as it gives an overview of your therapy and more convenience for bolus advice. Used with mylife cloud, data synchronisation is possible between you and your HCP, making treatment discussions easy as graphs and statistics can be seen there by both parties.

For those not using a pump, there’s the mylife Unio blood glucose meter, which features a similar modern design, making it nice and small to handle. It has an LCD display for clear results of fast and accurate results and includes up to four daily alarms as well as up to four event markers which can be selected for each measurement, and can be subsequently edited.

Much of the design of these two meters was based on user surveys, so the power of the people has influenced the end-design, and the company reports high feedback for ease-of-use. Of interest to some might be the equally nifty tub of sensors that goes with mylife sensors which is less round and more of an oval shape (46mm high, 44mm wide, 28mm deep). Sensors need no coding, and many might be amused by the fact that sensors are inserted ‘sideways’ which is meant to make putting blood on the end of the sensor less hit-and-miss.