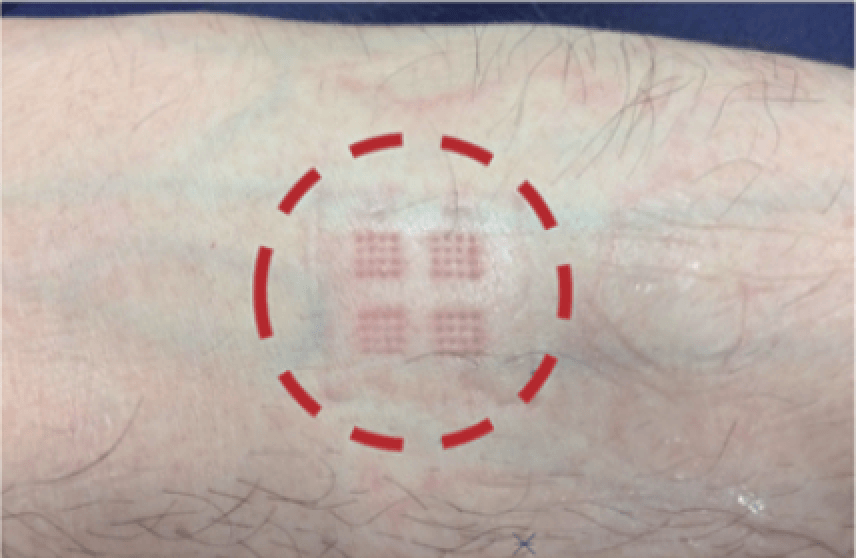 ‘Microneedle continuous glucose monitoring (CGM)’ is a concept that is being worked on at Imperial College London. Sue Marshall talked to Dr Monika Reddy about the project and how it’s different from other CGM solutions. 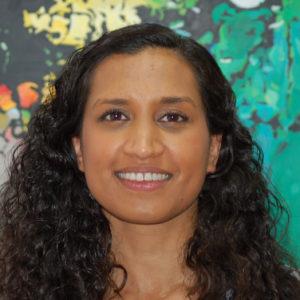 At Imperial College London as part of diabetes research projects there are several technology solutions being undertaken by Professor Nick Oliver and his team. As part of this team Dr Monika Reddy has been working on one project in particular looking into microneedle CGM.

Reddy explains, “We work closely with a small team of chemical and biomedical engineers to further ideas that can potentially improve control and quality of life for people with diabetes. Currently people with Type 1 diabetes and Type 2 diabetes treated with insulin are encouraged to do finger-prick blood testing four times a day.More recently we’ve been able to recommend CGM to individuals at high risk in line with NICE guidelines. However, virtually all current CGM involves sensors placed directly into the skin, with a needle-like filament that is placed subcutaneously into tissue. There are some downsides to this method, including some discomfort, the fact that it can lead to a reduction in sensor accuracy over time and when blood glucose is low (hypoglycaemia). Subcutaneous CGM does not use capillary blood but interstitial fluid, and that means it can be slightly behind the accuracy of capillary blood test results, as much as 15 minutes behind.”

So, can there be an improvement in the technology to get all the benefits of subcutaneous sensor CGM but with greater accuracy, and what about ease-of-wear too? Says Reddy, our microneedle CGM concept still uses the same chemical – glucose oxidase – as used in other CGM systems, but instead of using one filament it consists of a small wearable patch containing a series of very small spikes or needles that penetrate only the outermost skin layer. By using several spikes you get more than one glucose measurement, which can improve accuracy. Current CGM solutions cost around £150 a month, and this is a cost that limits the ability of HCPs to recommend it to all people with Type 1 diabetes. We are working on a microneedle CGM that should be more affordable as well as more accurate.” 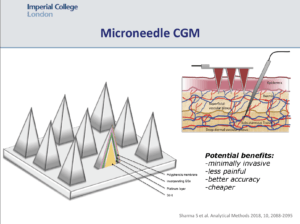 Getting the needle
I don’t know about anyone else, but while CGM can bring its own problems – you can knock them off, they can cause bleeding and some discomfort at insertion and get a bit itchy, but in the main they are not painful. I’m not sure I’m liking the sound of ‘a series of small spikes’. But hold on, how this would feel to wear has been a key point in designing the solution.  “We not only want to push this technology forward in order to improve on factors that is has in common with other CGM solutions, such as accuracy, but also taken into account the fact that these currently leave something to be desired in terms of usage. For example, we are looking to have a reduced pain score with this technology. As the microneedles are only 1 mm deep, this should not cause pain and lead instead to less inflammation and reduced infection risk. Although only at the early stages of research, our current technologies do work in the clinical research setting. We had prototypes that were simply inserted by being pressed into the skin with thumb pressure. We expect to include some sort of applicator for a commercial product, which will make it even better to use. The forearm was the site on the body that was used in the feasibility trial. While that was perfectly effective, we would want to test for use in other areas. Ideally, if possible, anyone could put it wherever suits you best. A transmitter will be required so results can be sent to a reader or compatible apps or even insulin pumps, and our chemical and engineering colleagues will be working towards making the whole system as small as possible.” 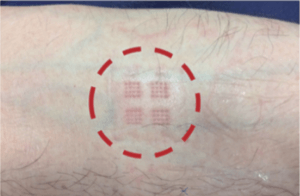 Microneedle CGM can be seen worn on an arm.

As it stands, the project is at the early phases of research, but a preliminary study showed accuracy similar to that of the most accurate commercially CGM system currently available. Obviously more research is needed, as well as more funding and the timeframe for this is unknown. Reddy explains, “We are just at the very early stages, but having said that the results so far have been very encouraging. Next steps would involve looking at sensor lifespan and evaluate its use in the home setting i.e out of the clinical research facility. We aim to make the microneedle CGM a cost effective solution so that more people with diabetes can benefit from the clear benefits of continuous glucose monitoring.”