Marathon running when you have diabetes

Top tips on running when you have diabetes, from local jogs to long-distance and endurance running. 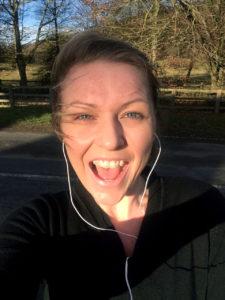 Jen Grieves, who has been within the pages of this magazine before, once ran a half-marathon and describes herself as a ‘recreational runner’. She says, “I tend to do most of my running in the morning, and I will simply get up, have some water, check my CGM, and put on my trainers before my body clocks what’s happening. If I’m running in the evening, I find my body will always carry me as I’ve got surplus energy left from the food I’ve eaten that day. Much like hydration however, I found that when training more seriously, food became more important the further I ran. Anything upwards of 10km and I would have my fail-safe superfood protein porridge about two hours beforehand, which made me feel absolutely kickass.

“We’ve historically trained ourselves to believe that exercise is a chore; something that we have to ‘fit in’; an inconvenience that we merely endure. How many times have you said to yourself, ‘I really should go for a run’? This only emphasises it as an undesirable activity, when instead we could easily be saying, ‘I’ve had a tough day at work, so I’m going to indulge in thirty minutes to myself, and reward my body and clear my mind by going for a run in the air’.

“When I first started training I was hypoing all over the shop because I just wasn’t yet aware of how my body would respond to different types of exercise, and how that varied at different times of day, after different foods. Just like anything else, this takes practice. Your body is a very unique tool that you need to tune into to understand it better. And you’ve got to work WITH it, not against it.

“If you do end up having a hypo, deal with it quickly, get a little annoyed for sure, but don’t think that you’ve negated your workout and thus the benefits you gleaned from it. It really doesn’t. You will still have cleared your head, still have improved your lung capacity, still have challenged your body positively, and still have stoked up your metabolism. Test frequently in the hours after your runs to try and spot patterns that you can anticipate next time. I rarely go hypo while out running, but know that I will get a sudden drop a few hours later, so I get the OJ ready. Other Type 1s can’t get to the end of the street without their levels crashing, but as you tune into how your body responds to running, you can hopefully reduce the hypos and reap the benefits. It goes without saying that having a glucose gel or some glucose tablets in your back pocket on a run is a wholly wise idea, because this glorious condition has a tendency to suss out the most inconvenient opportunities to be wholly unpredictable. But don’t use that an excuse to not bother at all.” 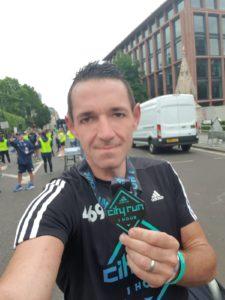 Keep on running
Meanwhile, Brian Hoadley is running the London Marathon for the first time at the end of April. At the moment he is running five days a week and says, “Don’t be afraid to get out there and give it a go. You’ll only learn how your diabetes reacts to exercise by trial and error. I’d also say, find yourself a training buddy otherwise an 18-mile run is a lonely task. I like to think that there is no such thing as a bad run, only a good learning opportunity.”

Then there are those people who take things to extremes! Roddy Riddle is a regular runner and came second in the 2017 6633 Ultra Marathon, held in the Arctic. “My number one tip is to keep a diary of how each exercise affects your glucose levels. I call this a ‘Haynes Manual for Type 1 and exercise’. I keep records so that the next time I do a three-hour run in hilly landscape, I can check my diary and see what worked – or what didn’t, the last time I did a similar run. I swear by my CGM sensor. I I couldn’t do a lot of things I do without it – no question. When I ran the 6633 Ultra in the Arctic, I couldn’t exactly remove three pairs of gloves to prick my finger to see what my glucose level was! The trend arrows, up or down, mean I can anticipate a hypo or hyper and treat accordingly. And if you’re on a pump, then another top tip is to attach a second pump cannula just in case the first one gets ripped off, then you only have to reconnect to the spare one rather than do a whole new set change on the run.

All these people with diabetes have been running on Dexcom CGM.

Home test to screen for Type 1