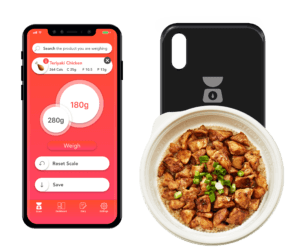 Daniel Blumer was diagnosed with Type 1 diabetes in 2009 after losing a lot of weight and feeling weak. He visited his doctor and was sent to hospital and reports that after a week in hospital he went back to his student flat ‘feeling a little lost’.

Even then, as he began to understand the rigours of a life with diabetes he downloaded a nutrition diary app. However, he says, “I thought it was quite hard to write down what I ate without including information about the amount – the weight – of what I ate. So ended up restricting myself, eating food that came in packages. I was studying engineering and always carried my phone with me, and it came into my mind that a phone case with an integrated scale would be great. Later I thought that an app that calculates the carbohydrates in the phone itself would be the perfect solution.”

Hence MyGrams was born as an idea, and Blumer with some friends and colleagues started to look at actually building the smartphone scales and setting up a business to sell them in order that other people with diabetes could benefit from this new bit of diabetes tech. The scales have gone past the prototype and demo stage and the company has started a crowdfunding campaign on Indiegogo.com. The campaign is going well, but needs more support in order that the first scales can be shipped in November 2019.

Says Blumer, “We are in a university incubator and are working really hard to bring the product to market. After delivering for the crowdfunding backers we distribute in the US and across Europe.”

For the initial product launch the MyGrams smartphone scales are only compatible with a selection of phones, such as the newer iPhone X but Blumer says that the plan is to expand the product line in terms of choice of compatible phones, and also develop the tiny scales as a standalone product, so users can slip them into a pocket or bag and not necessarily have them as a backpack on their mobile phone, and still work with the app on a phone if required.

Blumer, Co-Founder, and CEO of MyGrams, adds, “We understand very well how hard and restrictive life with diabetes can be. Our product and app are intended help to anyone who has been diagnosed with the condition. We are constantly working to further develop MyGrams to best meet the needs of people with diabetes and their families.”

MyGrams is smart mobile phone cover that calculates the exact nutrient composition of food and helping people with diabetes to keep track of what they are consuming.

Why?
More and more people take more care about what they eat than ever before. Many like know if they are covering their daily nutritional requirements or the exact composition of their food. The founding team of MyGrams has developed a practical and functional alternative to conventional, cumbersome methods. The MyGrams phone case, which has an integrated scale in combination with the MyGrams app, determines precise nutritional values of foods to the nearest gram. With the help of the app, users can plan and record meals.

How?
The scale is integrated into the smartphone cover, you take it from the bumper, open the app and select the food you want to weigh. MyGrams also serves as a protective cover for the mobile phone and is connected to it via Bluetooth. To see a YouTube video click the link: https://www.youtube.com/watch?v=P6Fzstk3ooA