Get your insulin pen connected

Connected insulin pens, and pen caps that track doses are all the rage these days.

Novo Nordisk’s main product has always been insulin, but it also came out with the novel idea of an ‘insulin pen’ back in 1985. The NovoPen was a simple yet brilliantly innovative device back in its day. It used pre-filled cartridges and twist-on pen needle and revolutionized how people with diabetes took their insulin, pretty much making it cool overnight. The pens did not look medical and could reside quite happily in a pencil case, pocket, purse or bag. It was the biggest change in insulin injecting since disposable syringes had taken over from glass-and-metal ones a few decades earlier.

But the one thing missing from this fabulous tool, and the others like it that came from other companies in the insulin sector, was that there was no way to track doses other than people keeping the information in their memory or writing it down in a diary. Doctors must have despaired, as only the most ardent diabetic would put down all their doses correctly.

The lack of ability to track insulin doses was so obvious that at least two people with diabetes that I know of have brought out their own solutions, which they have had to try to market. But with any niche device or tool, it’s costly and relies on a fair dose of luck to make the product well known and easily available. See below to read more about InsulCheck and Timesulin (both of which we’ve covered before).

Now the industry’s bigger insulin providers are getting in on the act too, and it’s about time.

Novo Nordisk is again taking the lead, stepping up to ‘get with’ the digital era. Working with Flex Digital Health, part of Flex (formerly known as Flextronics), this year Novo Nordisk is rolling out two versions of a new ‘connected’ insulin pen. These will use Flex’s BrightInsight platform, which focuses on managing connectivity and compliance for regulated digital health devices.The company should be bringing out the devices, dubbed the NovoPen 6 and NovoPen Echo Plus, worldwide, during 2019 though no specific date has yet been set for the UK.

Digital health solutions can enable people with diabetes to gain better control by connecting insulin pens to apps on smartphones and other diabetes management platforms. Hence, in addition to announcing the intention to launch these new products, Novo Nordisk has also confirmed that it will have non-exclusive technology partnerships with Dexcom, Glooko as well as Roche in order to allow those companies’ apps to be used with the new connected insulin pens. Novo Nordisk already has an existing relationship with IBM Watson Health. Later, the company intends to add connectivity to its disposable insulin pens too.

Sanofi’s digital titration* solutions involve a blood glucose meter (MyStar DoseCoach) and a smartphone app (My Dose Coach), as well as another smartphone application called Insulia. These are all being tested by people with diabetes in pilot programmes looking at dose adjustment and digital engagement solutions. 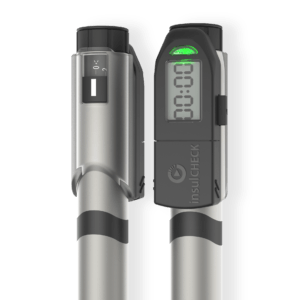 A simple cap that slots on top of your insulin pen and shows the time elapsed since your last injection. It works with the majority of insulin pens, both disposable and reusable (check the website for the full list it fits). John Hughes invented the pen cap due to his own need, as a Type 1 diabetic, and accidentally double-dosing his insulin. He says, “Diabetes isn’t a choice. How you manage it is. Knowing for certain when you last injected removes any anxiety or doubt.” www.insulcheck.com

John Sjölund, also a Type 1 diabetic, founded Timesulin with his brother Andreas. Timesulin’s pen cap tracks your last insulin dose, counting up from zero to a maximum of 100 hours.The next step is to build a cap that connects to your smartphone. The brothers Sjölund, together with Marcel Botha, founded Patients Pending Ltd, which was acquired last year by American company Bigfoot Biomedical, Inc., which wanted its Bluetooth-enabled insulin pen dose capture technology. Jeffrey Brewer, Bigfoot Biomedical President and CEO explained  purchasing the company saying, “We believe integrated systems are the future of diabetes therapy.” www.bigfootbiomedical.com

*A titrationis a technique where a solution of known concentration is used to determine the concentration of an unknown solution, in this case insulin and blood glucose.

This is an edited version of an article originally commissioned by DRWF for Diabetes Wellness Newswww.drwf.org.uk/get-involved/diabetes-wellness-network

Diabetes and other autoimmune conditions