An update on the closed-loop insulin delivery system being funded by JDRF to treat Type 1 diabetes, by Rebecca Leitch, who works at JDRF UK.

In our mission to help people with Type 1 diabetes lead better, safer, healthier lives until we ultimately find the cure, JDRF funds research into the development of new treatments for Type 1 diabetes. 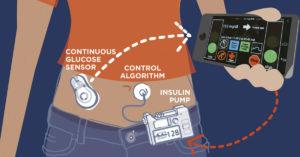 As part of its hypoglycaemia prevention efforts in 2006, JDRF began funding early ‘artificial pancreas’ research. Exactly one decade later, the first generation artificial pancreas – also knowns as a ‘hybrid closed-loop system’ – became available in the US. This is the Medtronic MiniMed 670G, the world’s first self-adjusting insulin pump system which automates and personalises the delivery of background (basal) insulin 24-hours a day, and is due for commercial release in the UK in 2019.

This means someone with Type 1 diabetes still has to work out how much bolus insulin they need as a result of what they eat. For that to no longer be the case, the gap between the process of eating and administering the required insulin needs to be fully closed, which is when the right amount of insulin is automatically provided at the right time – including mealtimes.

Professor Hovorka of the University of Cambridge is developing a closed-loop artificial pancreas with research funded by JDRF and the National Institute for Health Research (NIHR) at the NIHR Cambridge Biomedical Research Centre.

His closed-loop artificial pancreas will be an open protocol system (open APS), so that any insulin pump, CGM, and algorithm can communicate with it, regardless of the manufacturer. It is now going through advanced human trials after being found to be better at helping people with Type 1 diabetes manage their blood glucose levels by keeping them in range 65% of the time, compared with 54% of the time without the technology.

However, this system still requires rapid-acting insulin doses at meal times. At the moment, the manmade insulins available are not quick enough to counteract the increase in glucose in the blood after eating carbohydrate. New insulins are therefore needed, which is why JDRF has partnered with Cambridge-based pharmaceutical company, Arecor who began developing a new, rapid-acting, ultra-concentrated insulin in 2018.

But while progress on this is just around the corner, JDRF continues to have its eye on the cure for Type 1 diabetes.