Time, Lords and Sensors: How we got to here, and where we go next 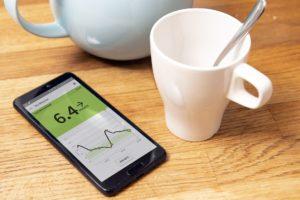 Abbott’s FreeStyle Libre data can be viewed via a smartphone app.

According to news released on 14 November, coincidentally World Diabetes Day, there will be nation-wide availability of Abbott’s FreeStyle Libre flash glucose sensor on the NHS (for those who qualify) thereby ending what was widely reported to have been a postcode lottery. Various CCGs had seemed either unable or unwilling to fund these undeniably useful glucose sensors creating much frustration within the diabetes community. See the BBC news story here: www.bbc.co.uk/news

These sensors, which are easy to use and discreet, can help keep blood glucose levels stable in the short-term and lead to a lessening of risk of long-term health risks like amputations. Whatever up-front cost they confer is negated by a reduced need to do ‘finger stick’ blood tests, therefore saving on blood test strips, and also mitigate against the cost of handling things like hospital submissions for an extreme hypo- or hyperglycaemic episode, or sight loss or kidney damage, where prevention is certainly massively more cost effective than the damage caused by uncontrolled glucose levels. With patients proving very willing to engage with this technology, it’s a no-brainer to let them have access to it.

The fact is that most people know someone with diabetes, and the older you get the more likely that is. Far from it for us to say that everyone in the House of Lords is old, but there is something to be said for the wisdom shown in lobbying and debate that happened prior to the NHS’s announcement. Lord Morris of Aberavon on 31 October addressed the House saying, “I have declared on more than one occasion the interest of one member of my family in the treatment of Type 1 diabetes. I have taken part in many debates on diabetes and I am grateful to Diabetes UK and JDRF for the vigour of their campaigning and their advice. The incidence of diabetes has doubled in 20 years, making it the fastest-growing health crisis. By 2025, it is estimated that 5.2 million people will be living with it. It costs the NHS £10 billion every year, largely spent on dealing with preventable conditions. Direct and indirect costs are much more.

“Tonight, I shall concentrate on Type 1 diabetes. Although its effect has some of the characteristics of Type 2 diabetes—I am not a medical man—it is largely a different problem, it is not connected to lifestyle and it strikes people of all ages, some of whom are very young.

“Some years ago, I went to various research centres at universities. I went to Oxford, and I met Dr Hovorka’s team at Cambridge, my old university. I went to London, where ground-breaking research was taking place on the failure of the pancreas to produce insulin and its replacement but, so far as I know, results are limited. Over the last few decades, new technologies have transformed the way diabetes is treated and monitored and can help to reduce diabetes-related complications in the long term.”

Real time advances
Then Lord Rennard took up the baton, adding, “I know that the aim of reducing variation in the management and care of people with diabetes by 2020 is included in the NHS England mandate, but how this will be achieved? There are implementation plans to facilitate the wider provision of flash glucose monitoring systems; how are these progressing? We all know that we need to rely on NICE conducting some sort of cost/benefit analysis for any such product, but is its processes for analysing the costs and benefits of new technologies aimed at improving diabetic control sufficiently long term? Does any such analysis for public policy factor in all the long-term costs to the NHS and the welfare system of poor diabetic control, as well as the wider benefits to the economy and to society of helping people to achieve good control?

“Flash glucose monitoring, real-time continuous glucose monitoring and insulin pumps may all provide technological solutions to help people with Type 1 diabetes live healthier and happier lives for very much longer. There is, for example, a much greater provision of insulin pumps in the United States than in this country, and this is not simply because the US has a greater love of technology than we do. Overall, the US healthcare system is known to be massively inefficient and ineffective compared to our own NHS but, with an insurance-based model, you know that the insurance companies evaluate the long-term costs to their businesses of dealing with the complications that arise from poor diabetic control. These insurance companies appear to have decided, on sound business grounds, that much greater provision of insulin pumps saves them money in the long run, to say nothing of the wider benefits to patients and everyone else.”

You can see the full transcripts of the debate at www.theyworkforyou.com/lords

Saving the day
So on World Diabetes Day 2018 (14 November), the NHS announced that it was to end the postcode lottery for the Libre sensor. See news as reported on the day by the BBC (www.bbc.co.uk). One diabetes consultant who has championed the use of diabetes technology, helping advance the availability of the Libre in particular – but as he states, that’s just the start. He has since commented, “This day which will stay as a landmark for me, the culmination of 12 months of work. NHS England has stepped in and decided enough was enough regards the postcode lottery in relation to access to the Freestyle Libre and has mandated a uniform uptake from April 2019.

“The reason for the national push was simple – this was a paradigm shift in glucose monitoring, opening the world of non-invasive glucose monitoring to the many, and it so happened Freestyle Libre was the first to come out. Within 4-5 years non-invasive technology will be the norm. This was about the NHS joining the diabetes technology curve on a par with other nations, years later, as normally happens with any technology. The time has come to take up the battle regards other CGM options, and insulin pumps as well. We should also not forget there is a vast amount of folks who don’t want technology either and that their care needs to be well looked after too.

“The national diabetes audit shows one thing consistently: that many people with diabetes are not achieving their Hba1c targets. That’s not their fault, it’s the systems fault, in my opinion. It reflects that we are failing to grasp the intricacies of Type 1 diabetes management which, to me, hinges on the availability of tools for improved self-management, peer support, and access to both trainers and technology. And they need to be present simultaneously. One NHS. One policy. One rule. Type 1 diabetes care needs do not change based on where you live. Let’s see whether we can do this without having to go to a national mandate again.”

Speaking to www.healthawareness.co.uk Dr Dinesh Nagi, consultant in diabetes at Mid-Yorkshire NHS Trust and chairman of the Association of British Clinical Diabetologists (ABCD) commented, “Raising awareness of all these new diabetes technologies can only be a good thing and will improve the current situation, which is far from satisfactory in terms of ease of access. I would urge all insulin-treated patients to ask their specialist or GP if they are eligible or can benefit from these technologies.”

Giant steps
So from the Lords, and doctors, what about the attitude of the government? The NHS announcement is most certainly welcome. Matt Hancock, the Secretary of State for Health and Social Care is giving a keynote speech on 22 November at a new event called Giant Health, which has been set up by American-born technology entrepreneur Barry Shrier (who is now based in Oxford). This new conference is dedicated to the promotion of health technology, celebrating the value of the contributions to healthtech innovation from diverse people including inventors, app developers, clinicians, corporate enterprises, the investment community, healthcare service administrators and startups.

Both Hancock and Shrier have a background in software technology, Hancock has said, “I want the UK to become the home of healthtech to complement our world-leading life science, artificial intelligence and genomic sectors and some of the best technology companies on the planet. We must embrace this coming wave of technology and transform our NHS into an ecosystem of innovation and enterprise so patients benefit from the latest treatments.”

Subjects being covered at the Giant Health event are Artificial Intelligence (AI) for next generation drug discovery, revolutionising healthcare with immersive technology, and tech innovation in tackling diabetes and wearable wellness.

Editor’s comment:
Abbott’s Libre is brought attention to the very exciting arena of continuous glucose monitoring, a topic that has grown exponentially in recent years after a slow start. The time is right to keep up the pressure on pressing forward for all diabetes technologies to help improve care now, and not allow short-term cost issues to endanger the health of people with diabetes in the long-term. It’s those long-term costs that are the truly high price that is paid for not understanding how these technologies can keep us well for longer.