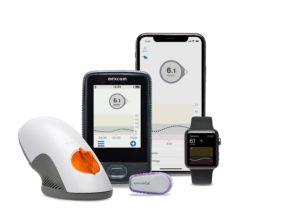 Diabetes tech innovations and approvals are coming along thick and fast these days. In Europe, the CE Mark (Conformité Européenne) is used to indicate that a product conforms with relevant EU directives regarding health and safety and can therefore be sold. In the US, medical devices cannot be sold unless they gain approval from the Federal Drugs Administration (FDA). Here’s a few of the recent big wins.

DEXCOM G6: Dexcom has received CE Mark for its Dexcom G6 System for people with diabetes ages two years and up. John Lister, Dexcom’s General Manager for EMEA, says, “The Dexcom G6 represents the future of diabetes management. Not only does the product eliminate the need for fingersticks, but it also maintains the performance, connectivity and accuracy that the diabetes community has come to expect from Dexcom CGM. The groundbreaking Dexcom G6 will be available in the U.K. and Ireland this month. Dexcom G6 encompasses new features that empower users to take control of their diabetes.”

As per our Kit That’s Coming Soon report in the last issue of this magazine, the new G6 has several improvements and new features over the previous generations of the technology, including eliminating the need for a blood test to calibrate and 10-day sensor wear. Read more on p.22 of this issue HERE.

Doctor Nick Oliver from Imperial College London, says of the new sensor, “For many years, fingerstick blood glucose testing has been a critical component of diabetes self-management. However, the self-monitoring, which can sometimes mean testing blood up to ten or more times a day, can be time-consuming, painful and difficult to fit into a busy day. The Dexcom G6 presents a major advancement for the continuous glucose monitoring category. With Dexcom G6, people with diabetes now have the freedom to live without routine fingersticks and can rely on their CGM data to make treatment decisions, enabling more personalised and effective self-management.”

Available for orders now for delivery by the end of June, Dexcom G6 is 28% cheaper than the previous G5 model. The system includes a new G6 transmitter and sensors. The new touch screen receiver is optional for international users and can be purchased separately. Users will need a touch screen receiver or compatible smart device and the G6 app, along with the new G6 sensors and transmitter.

For more information on Dexcom G6, visit www.dexcom.com/en-GB For more on pricing, see THIS LINK. 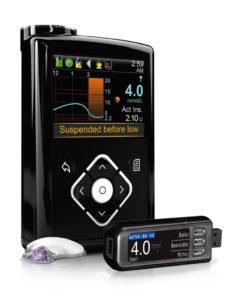 Medtronic Minimed 640G, predecessor of the 670G, shown with the Enlite CGM and Contour Next Link 2.4 blood test meter.

MEDTRONIC SMARTGUARD AUTO MODE: Meanwhile, more news from Medtronic. The MiniMed 670G system – the world’s first self-adjusting insulin pump system – has been CE Mark approved. Alejandro Galindo, president of the Advanced Insulin Management division within the Diabetes Group at Medtronic comments, “We’re proud to introduce our most advanced SmartGuard Auto Mode algorithm outside of the United States, which not only helps to prevent lows but works to drive Time in Range – a most important measure of the effect of diabetes management on a patient’s glucose levels – by decreasing time in hyperglycemia. The MiniMed 670G system advances our ability to automatically suspend and resume insulin delivery to the next level by automating self-adjusting basal insulin delivery every 5 minutes based on sensor glucose values – providing the most advanced algorithm available to deliver leading clinical outcomes.”

Doctor Pratik Choudhary, senior lecturer and consultant in diabetes at King’s College London adds,”We have seen that this innovation offers great promise for better glucose control and improved quality of life for those living with Type 1 diabetes,” said “The ability of the MiniMed 670G system to stabilize glucose levels automatically is an important advancement, and I look forward to introducing it to my patients in Europe.”

Medtronic will begin commercial release of the MiniMed 670G system in select countries in Europe in the autumn of 2018, subject to local regulatory requirements. The company’s UK office has issued a comment stating, “We are working hard to have this product available in the UK and Ireland this autumn.”

OMNIPOD DASH: The Omnipod DASH system has gained FDA clearance. This insulin management system is a tubeless, on-body insulin pump that delivers continuous insulin therapy through customizable basal rates and bolus amounts. The system consists of a waterproof Pod and a Personal Diabetes Manager (PDM), a handheld device used to wirelessly control the Pod. The PDM has a colour touch-screen interface.

The Bluetooth-enabled Omnipod DASH system will also feature a suite of mobile applications that allow users quick and easy access to their PDM data on their smartphone. The system will have a Today View Widget which will give users the ability to see their CGM and insulin delivery information together on a single screen on their personal iOS mobile devices, helping to make diabetes management simple and seamless. The company will be conducting a six-month, limited market release of the Omnipod DASH System in the United States. A wider commercial release of the Omnipod DASH System is anticipated for early 2019.