My Diabetes Kit interview with Gavin Griffiths, the DiAthlete

EDITOR’S NOTE: When I spoke to Gavin Griffiths, also known as the DiAthlete, he had completed 16 marathons and had nine more to do before running the final one in London on May 13, bringing the total to 25. A marathon is 26.2 miles. These runs were undertaken in various cities around the country and for many he was joined by local people with diabetes who ran some or all the way with him. – Sue Marshall 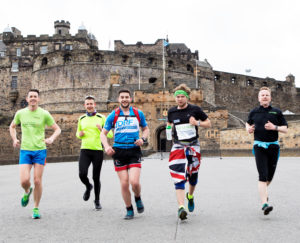 Gavin Griffiths was diagnosed with Type 1 diabetes when he was eight years old in 2000. He’d been off sick with the ‘flu virus and recalls, “We’d been calling it the millennium bug, we were all sick my mum my dad and my sister, but I was the only one who stayed ill. I’d been off school and had been poorly all over Christmas. I couldn’t get a doctor’s appointment as it was hectic over the holidays. I finally got seen at the doctors in January and they rushed me into hospital. It took a week to stabilise me and I left with syringes and a vial after being taught how to use mixed insulin. I also had a blood test meter. I remember you could press a button and it fired out the used lancet, which occasionally got me into trouble…”

Fast forward to 18 years on, and he was undertaking this marathon task, literally a marathon of marathons. What on earth possessed him? He says, “I’ve always been sporty but mainly in quite a laid-back way; competitive but gracious in defeat – as a Crystal Palace fan, I have to be! I do remember asking the doctor when I’d been told I had diabetes, ‘can I still play sport?’ At the time I was particularly bothered about football and it seemed back then that they talked more about the risks of doing sport over being supportive of it. Then about 10 years ago, when I was 17, I started doing sponsored runs in order to raise money for the local diabetes clinic. I think I was a little tired of being told I couldn’t do it, or that it would be hard. Even my parents were understandably worried, but I actually ended up running 29 miles in 3 hours and 1 minute – I proved to myself I could do it, just gutted about that minute!” 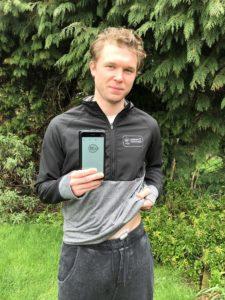 It was at this time that Griffiths started using the name DiAthlete, and it stuck. He started doing bigger challenges meanwhile engaging with people on social media networks. “In 2014 I did a challenge in the United States to do seven marathons in seven days. I was very lucky to have been sponsored by Dexcom. The company invited me over to take part and use their CGM system. It was the first time I’d tried any sort of CGM and it was immediately helpful. At that point I was using a G4, now I use a G5. I can see the data on my mobile phone via the Dexcom app and wear the phone in a clear case strapped to my arm. All I need to do it is glance at it to know what’s going on.

Of the UK-based series of marathons that Griffiths started at the end of April, he says that the interesting thing has been running through so many different landscapes, as well as meeting many people who have cheered him on and given him support in other ways. For each run he tended to start at about 9:30am and finish at about 4:30pm, having had a lunch break earlier in the day. He was accompanied on each run by a support car supplied by each area’s local diabetes network, driven by a volunteered who tracked his progress as he went through their city. Accompanying Griffiths on each leg of the undertaking was nutritionist Paula Chinchilla, who was also in the car. Says Griffith’s, “Paula could also see my results on an app she had on her phone as I’ve shared my data with her from my account. She basically looks after my health while I concentrate on the running. She would ring me if she thought I was dipping too low and needed to eat something, whereas I might not have noticed as I was too busy concentrating on moving.”

While Griffiths did the marathons he wore a belt containing some sugary gels and an insulin pen. He could resort to those tools if he needed to push his blood sugars up or down. “You would expect that when you ran a marathon you would go low,“ he says, “But oddly, post-exercise, I tend to go high. I now put my basal in a bit later in the day, and occasionally I do a bolus towards the start of the last mile of the run. Putting it in then seems to help me come off the run better.” 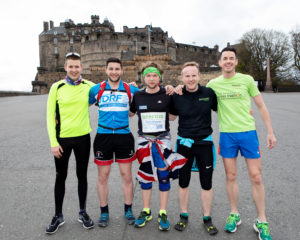 People might assume that Griffiths uses an insulin pump but in fact he uses prefilled insulin pens of Novo Nordisk’s Levemir and NovoRapid. “Using insulin pens seems to work for me just now,” he says, “I am pretty settled and there seems no need to change. When I travel overseas I don’t see many pumps, even my disposable pre-filled insulin pen look quite high-tech in some of the countries I visit. The fact that I also inject makes me more like the people I meet out there who also have diabetes. I guess it makes me more relatable. Maybe one day I will go on a pump, but for now I’m happy with what I use.”

Another tool that Griffiths uses is carb-counting. “When I was 16 I changed from just using injections of mixed insulin to a basal/bolus regime and at that point I was seeking information about matching food to insulin doses. Until then I’d just injected quick-acting insulin three times a day with meals. I learned the hard way after having a bad patch of hypos that I needed to know more about my food. I was lucky to do a DAFNE course at Queen Mary’s Hospital in Sidcup and that was an eye-opener and has held me in good stead ever since.” 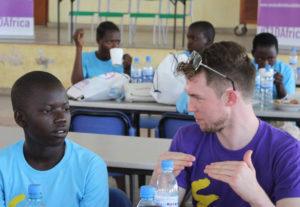 In 2015 Griffiths began setting DiAthlete as a professional sports and education arrangement and he is in the process of setting it up as a charity. It incorporates a global aspect, that of an International League of DiAthletes. Through this he has built up a network of contacts of people living with diabetes all around the world and has DiAthlete advocates in different countries. Griffiths says, “They are my friends with diabetes and they are a huge support to me, people like Mo in Kuwait who was diagnosed during the first Gulf War, and Sana Ajmal who is from Pakistan and who co-founded Meethi Zindagi, the only organisation in Pakistan that provides peer support to people with Type 1 diabetes.”

In July of this year he is bringing several of the global advocates together in the UK for some training. He says, “I see this as being my work, it’s about Type 1 diabetes on a global scale, it takes a lot of organizing and is what I am passionate about. As ‘Gavin’ I work other jobs to help earn money, but being ‘DiAthlete’ is the full-time, cool part of my life today.”

The DiAthlete thanks Dexcom, Frio and Decathlon, the companies who supplied products, support and sponsorship to help Griffiths complete his epic endeavor.

To find out more: Diathlete.org