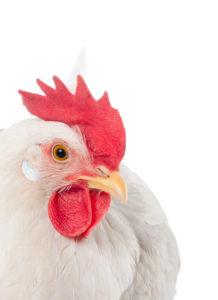 Finger lickin’ good, chicken is a low fat meat that fills you up with protein.

Spring chickens are young chickens, under 10 months old, and considered tender. Alternatively, if you’re called ‘no spring chicken’, then it’s implied that you’re no longer young. And as spring is in the air, we wanted to take a look at chicken meat as a foodstuff. Today, chicken – both meat and eggs – are a major source of protein in the modern diet, and as such have given way to many, many recipes from the Sunday roast, to chicken curry, BBQ’d chicken wings, chicken noodle soup to chicken and stuffing sandwiches, to name but a few.

Foresighted, ambitious, meticulous, independent, according to the traditional Chinese zodiac, those born in the Year of the Rooster* are seen as being representative of confidence and intelligence reflecting the curious and independent nature of the birds.

According to Organicfacts.net, “Chicken is the most common type of poultry in the world. It has been domesticated and consumed as food for thousands of years. It is believed that chickens were first domesticated in India thousands of years ago, primarily for cockfighting and later for meat consumption. Later, chicken spread to other parts of Asia, Africa, Europe, and eventually America, where it was brought by the early colonists from Europe. Until the 19th century, chickens were often domesticated in households, both for their meat and their eggs. An excess amount of meat and eggs were used in bartering systems. In the latter part of 19th and the early 20th century, household chicken farming gave way to chicken farming as a big business due to the increasing demand from cities.”

Chickens – particularly roosters – have long been used by various societies as symbols and is the national symbol of France where Le Coq Sportif (the athletic rooster) is a well-0recognised brand. There are also references to roosters in Norse mythology. Chicken as a meat has been depicted in Babylonian carvings from around 600 BC. Chicken was one of the most common meats available in the Middle Ages and the Chinese zodiac where the rooster is sometimes just referred to as ‘the bird’.

Chicken meat
Wikipedia states that chicken as a meat has been depicted in Babylonian carvings from around 600 BC. Chicken was one of the most common meats available in the Middle Ages. Virtually all parts of the chicken can be consumed, from chicken livers, cooked and often made into chicken liver pate, to chicken feet, considered a tasty delicacy in many cultures. And anything left over can be used to form the basis of a stock that can then be used in soups, stews and risottos.

Chicken meat is relatively affordable, is high in protein (making it filling) and low in fat and has zero carbs so is widely considered a very healthy foodsource, linked to controlling blood pressure, is associated with reduced cholesterol levels if consumed regularly in place of red meats where cholesterol levels are naturally higher.
Richard Griffiths, Chief Executive, British Poultry Council (BPC), states: “Today, poultry accounts for half the meat eaten in this country. From farm to fork and from processing plant to export, we have built a strong track record of feeding the nation and embodying the ‘Great British Food Values’ that our consumers demand from our food.”

BPC Chairman, John Reed, has been able to comment on the UK’s poultry industry’s use of antibiotics, saying: “The British poultry sector has reduced its use of antibiotics by 44% since 2012, it was revealed today at a reception in Parliament. Coinciding with the launch of its report, ‘Leading the Way in the Responsible Use of Antibiotics’, the industry reinforced the leading role it has on this subject. Antibiotic use is an incredibly important subject for both animal and human health. The British poultry sector has taken a lead in understanding its own use and impact, and we hope that others will follow suit. Since 2011 we have worked with the Veterinary Medicines Directorate to collect accurate poultry-specific data, and we are delighted that we have reduced our use of antibiotics by 44%. Our priority remains the health of our birds, and the responsible therapeutic use of antibiotics is crucial.”

Two quick tips when handing raw chicken: always remember to wash your hand thoroughly after handling raw chicken and also eggs, and don’t touch anything else in the kitchen until you have done so. Never wash chicken in water (this was a habit with some people but it’s been found that this can increase your risk of food poisoning from campylobacter bacteria (the most common cause of food poisoning in the UK). Splashing water from washing chicken under a tap can spread the bacteria on to hands, work surfaces, clothing, and cooking equipment. Water droplets can travel more than 50cm in every direction. Only a few campylobacter cells are needed to cause food poisoning.

Percentage Daily Values (%DV) are for adults or children aged 4 or older, and are based on a 2,000 calorie reference diet. Your daily values may be higher or lower based on your individual needs. Source: SELFNutritionData

America’s National Chicken Council has a ‘Chickopedia’ which explains what consumers need to know about terms such as free range, farm raised, natural, organic, and enhanced chick products. www.nationalchickencouncil.org

And there’s the upsides of organic chicken from Organic Facts: www.organicfacts.net/chicken

News items and features like this appear in the Desang Diabetes Magazine, our free-to-receive digital journal (see below, or www.desang-magazine.co.uk). We cover diabetes news, diabetes management equipment (diabetes ‘kit’ such as insulin pumps and continuous glucose monitoring equipment) and news about food suitable for a diabetic diet including a regular Making Carbs Count column. We just need your email address to subscribe you (it’s free, and you can easily unsubscribe should you wish to).