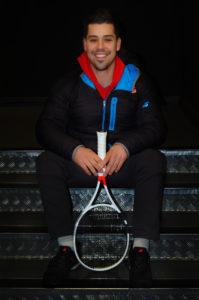 Josh Golding was diagnosed with Type 1 diabetes at the age of eight. At the time he been having some problems at school, needing to go to the loo a lot, feeling very tired and having problems concentrating.

Looking back, the 25-year old says, “My Gran did a bit of research and said to me, ‘You should get tested for diabetes’. We rang our local GP and a doctor and a nurse came round and tested my blood, then they came back again later and did it again. Then they told me straight away that they thought I had type I diabetes. I didn’t go into hospital, a nurse came over to show us how to do injections at the time I remember thinking that the needles were terrifying and I cried and ran out of the room.

“My dad said, ‘You’ve got it, you need to accept it and start to deal with it.’ I wake up every day and say that to myself, and I try to keep learning as it helps me feel empowered. My dad’s a businessman, so he can be fairly blunt about things. My mum was a little more anxious. She made sure that things like biscuits were to hand should I have a low blood sugar. I now think that my whole family eats quite healthily and I’m sure it’s partly due to the experience of living with diabetes and having to know so much about food. I ended up learning a lot about the best foods for people with diabetes, especially in relation to doing sports. I was already playing tennis by that time and I decided to push myself further with sport and be successful at it.”

Things got back to normal at school for Golding until he was about 12 or 13, when he says he was bullied a bit. He says, “Some of the kids had seen me testing and they called me names, like ‘needle boy’. Looking back it was all a bit silly and I’m sure they just didn’t understand what I was doing, but experiencing that has helped me to push myself so that now I try to educate people about what it’s like to live with the condition.”

Golding started playing tennis at the age of six, so he had some knowledge of the sport when he was diagnosed and started having lessons from the age of 10. By the time he was in his early teens he was starting to take it more seriously. He started working at a tennis coaching academy in Welwyn Garden City when he was 15, living there during the week and at home at weekends. The schedule meant he played tennis every morning and did his education in the afternoon.

When he was 18, Golding went to Cowley Community College in the United States, partly funded by a tennis scholarship. “It was in Kansas,” he says, “and had great tennis facilities. I was a bit more on my own when I was there, none of the other students had diabetes as far as I know, but then at that stage I was quite closed to talking about it. I came back to the UK a couple of times a year and did my clinic visits back at Milton Keynes during those trips. I came back when I was 21 by which stage I would say that I’d gone a little bit off the grid at that point in terms of my control.” 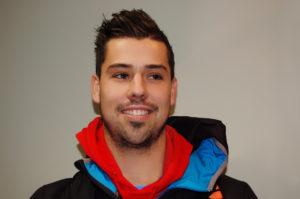 Family matters
Golding is the youngest in his family with four elder brothers and sisters, so he says that there tends to be quite a lot going on with family events and get-togethers. However he says, “I am the only one in the family with diabetes. I found that continuing to learn has really helped me; self-education was definitely a way I found of coping and continues to benefit me, and I think it helps others if I continue to communicate my experience. I love sharing that information. I’m involved in a local children-with-diabetes group in Milton Keynes. I mention my diabetes when I’m teaching the children at the tennis club I now work at. I think it helps them to understand that they can overcome obstacles too.”

Now 25, Golding plays tournaments and coaches tennis at a tennis club in Milton Keynes. “I am a tennis player by profession and coach the sport as well. A typical day involves coaching groups from 3pm, then I do children’s coaching from 5pm to 8pm either in groups or as individuals. To a great extent I have to fit around the schedule and I try to plan ahead, so if I’m playing a talented player I reduce my insulin to 30% as I know I’m going to be running around and hitting the ball a lot! I just see it as a challenge. I test as much as I possibly can.”

“As far as I can see, living with diabetes and doing a sport is a very healthy way to live. I think that doing a sport keeps you aware. It can help you keep on top of the rest of your life, including diabetes if you happen to have it. The first time I meet someone that I’m about to coach I explain that I have diabetes and I might have to do a blood test sometimes. They are usually quite curious. If it’s a child, then the parents are also forewarned just so they are not taken by surprise. Not that it’s a big deal, but I don’t see any point in hiding it. So far everyone’s been okay about it.

I think diabetes is basically quite good to me. It’s a healthy lifestyle. If I’m out playing tournaments I do the same drill as when I’m coaching, but with even more blood tests, doing one pretty much after each game. That might be around 30 in a two-hour match. The blood test meter I use is an Accu-Chek Aviva Nano. It’s small and easy to carry around a very simple to use.”

At the moment Golding is using an Accu-Chek Spirit insulin pump and he says, “I adjust my dose a lot depending what I’m doing, and I find that that works for me. I have pretty stable blood sugars most of the time. If I go for a night out and drink beer I might give myself a little bit more insulin, but then I will drop it right down again for the morning. My HbA1c has stayed at about 7mmols for years; it’s very steady.”

Golding is up for his four-year insulin pump renewal he’s reading up on what’s available and talking to people about their experiences. He’s used a Freestyle Libre at a tournament and says, “It did give me peace of mind as I could see trends of what was going on and could go back and review things like when I was high or where I was low. I enjoyed that.” 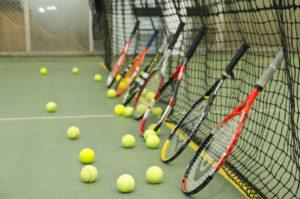 Anyone for tennis?
Diabetes UK runs a group called MKKidsWithDiabetes in Milton Keynes for children with diabetes. It’s been going for a while, and Golding says he knew of the group through his hospital. At the next event, which is running on 28 January, he is going to be doing a group tennis lesson. To start with, he’ll do a blood test and ask anyone who wants to play to do a blood test with him before they start. Then he’ll talking about being a Type I diabetic and having a career in tennis and what that involves. He says, “I was interested in helping, so I got in touch. I hope that by sharing my experience with the kids will help them to see a healthy, happy future for themselves.”

Meanwhile, in terms of his own career, he’s now a coach at Milton Keynes Tennis Club where most of the coaches compete in the national AEGON League*. Milton Keynes Tennis Club came third in the 2017 league and the plan for 2018 is to get into the top two places and get into the play-offs of the end of the summer in Bournemouth. As the club was only started four years ago, Golding says that the Lawn Tennis Association has been impressed by the amount of teams that the club entered for the first time, and for them to have done so well, saying, “In 2017 we entered eight junior teams to the AEGON League. Our red group, for children aged 5-8 years, won the division. So we’ve got a good base to build on and that’s the challenge for this year!”

*Aegon Team Tennis is a singles based team competition open for all LTA Registered Venues. It aims to provide players of all ages (8&U – Open) with regular league matches, against similar standard players in a competitive team environment. A total of 6,158 teams from over 1,050 venues are playing in Aegon Team Tennis 2017. It has also been a record season in terms of the number of fixtures completed. A total of 10,110 fixtures were completed in 2017.

News items and features like this appear in the Desang Diabetes Magazine, our free-to-receive digital journal (see below, or www.desang-magazine.co.uk). We cover diabetes news, diabetes management equipment (diabetes ‘kit’ such as insulin pumps and continuous glucose monitoring equipment) and news about food suitable for a diabetic diet including a regular Making Carbs Count column. We just need your email address to subscribe you (it’s free, and you can easily unsubscribe should you wish to).