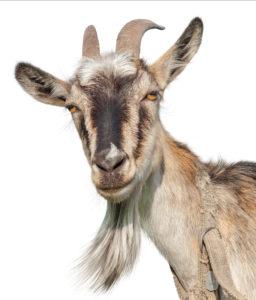 Not everyone feels comfortable eating meat other than the basics – beef, lamp pork and poultry. Some might even venture as far as veal, venison and game birds. But what about goat?

Familiar in many cultures, goat meat is gaining a following in the UK. Reporting in The Independent in September 2016, Lizzie Rivera wrote, “The UK is one of the only countries in the world that doesn’t commonly eat goat’s meat. But that’s set to change, as Lizzie Rivera finds out. Gourmet goat meat is being served at meat festival Meatopia this weekend, and it could soon be coming to a supermarket near you. Here’s how to cook it when it does…

Former River Cottage chef, James Whetlor is one of the pioneers of the goat meat revolution. Founded in 2012, his company, Cabrito (Spanish for ‘young goat’) rears and sells upwards of 10,000 kids a year – which would otherwise be culled just after birth as a by-product of the dairy industry – to seasonal and highly-regarded restaurants such as St John and Quo Vadis in London and Romy’s Kitchen in Bristol. “In today’s world it’s becoming less and less acceptable to have waste at this scale,” he says. “All farmers have wanted to find a solution and having been a chef and working at River Cottage, I was in unique position to provide it.”

This year he is involved in launching Goatober 2017 launches with events in London, Bristol, Manchester and Somerset with Cabrito is partnering with some of the best restaurants in the country for a month-long celebration of the dairy billy goat meat industry which will see events taking place all over the country.

Sue Quinn interviewed Fiona Gerardin at Bere Marsh Farm for The Guardian in 2014, who said, “Goat meat is a niche market that’s becoming more popular. It’s healthy, low-cholesterol, and very tender and lean, and can be cooked like lamb or venison. Happy animals raised with minimum stress and lots of care make tasty meat, so welfare is the most important thing for me. I spend a lot of time with the goats, observing and learning when they are content or unhappy. They’re not as hardy as sheep, and have to be housed at night in wet or damp weather and let out to graze in the day in the spring and early summer. They’re delightful and intelligent animals, but they have a penchant for escaping.”

Good food
At London-based Gourmet Goat (www.gourmetgoat.co.uk), run by Nadia and Nick Stokes, they say: “Many tens of thousands of dairy billies are slaughtered each year shortly after birth. These are the billies that help the goat dairy industry thrive. We feel this is a tragedy and are supporting suppliers who take the billies from the dairy industry and send them to responsible farms to be reared and ultimately sold for their meat.”

Raised in Cyprus, when she came to the UK as a student Nadia searched for the ingredients to make dishes that she was familiar with from her home country but found goat meat hard to source. She says, “A deep desire to cook professionally and more importantly recreate East Mediterranean village dishes led us to create Gourmet Goat. Given the strength of the kid goat dairy industry, why was it that a glorious meat enjoyed by so many other countries was being culled?”

Gourmet Goat is now an award-winning food business using unique sustainable ingredients and sustainable practices that have meant they are ranked as one of the top 20 sustainable restaurants as listed by Food Made Good from the Sustainable Restaurant Association part of the sustainable food movement. They also point out on their website, that data provided by U.S Department of Agriculture (USDA) shows that goat meat has the lowest amount of saturated fat and cholesterol than other meats cooked in a similar way.

Goat dairy products
Goats’ milk contains significantly more selenium than cows’ milk, which boosts the human immune system. The zinc in goats’ milk is also more readily absorbed into the body than from cows’ milk, and a glass of goats’ milk contains more prebiotic compounds (which encourage the growth and activity of ‘friendly’ bacteria in the digestive system, supporting normal gut health and function) and fewer allergenic proteins than cows’ milk, which could help alleviate symptoms of eczema, asthma, bloating, constipation, digestive discomfort and catarrh. Goats’ milk contains approximately 20% less cholesterol than cows’ milk and the cholesterol it does contain is more readily available for absorption by the body.
This information is from Delamere Dairy’s website, which was founded in 1985 in Cheshire’s Delamere Forest when Liz and Roger Sutton bought their first three goats. They began by selling the fresh goats’ milk and soft cheese they made in their kitchen to local health food stores. Their range of goats’ milk, cheeses, yoghurts and butters are now available in major supermarkets including Ocado. Delamere Dairy’s recipes made with goats’ milk, cheese, yogurt and butter are available at: www.delameredairy.co.uk/recipes

And then there’s goat’s cheese. “Forget brie or camembert, the Brits make cheese like no-one else,” says Patrick McGuigan who, when picking 10 of the best UK cheeses for The Telegraph, included Stawley goat’s cheese, which he described as, “velvety white and with brain-like wrinkles, the rind on this Somerset goats’ cheese is a thing of beauty. It also plays an important role in Stawley’s complex flavours, imparting intense nutty and mushroomy notes. The dense, pure-white interior exhibits herb and honey characteristics.”

Stawley goats cheese is named for the village in Somerset where Hill Farm Dairy is located and which is run by Caroline and Will Atkinson who left their jobs and moved to Hill Farm in 2008 to establish a herd of milking goats and to make goat’s cheese. Caroline had previously worked at Neal’s Yard Dairy in London, and then at Mary Holbrook’s farm near Bath, where she gained invaluable cheese making experience. Will was a lawyer in London and then Bristol, ‘with no relevant experience whatsoever’. They now have a herd of more than 100 goats and are making soft and hard cheese from their raw (unpasteurised) milk. www.hillfarmdairy.co.uk

News items and features like this appear in the Desang Diabetes Magazine, our free-to-receive digital journal. We cover diabetes news, diabetes management equipment (diabetes kit) and news about food suitable for a diabetic diet including a regular Making Carbs Count column. Go to the top of this page to sign up – we just need your email address. www.desang-magazine.co.uk