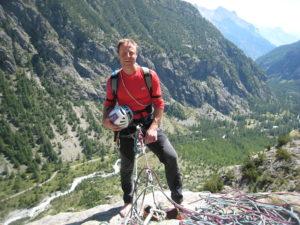 When I caught up with Jerry Gore to interview him, he was in Thailand, so it seemed sensible to ask, why was he there? By Sue Marshall

“I’ve just completed an annual fundraiser for Action4Diabetics, the charity I run to help raise awareness and give support and education to children with Type 1 diabetes in Asia. The British Ambassador came and did a speech and 20 people were enrolled in our Support a Child programme. The ambassador has adopted a child in this program. There were about 170 guests and we raised just under US$30,000, so it was very successful and as a result of this we can double the size of our program here. So far we have five locations across Thailand and the charity is only two years old.”

So what is his background?
I was an officer trainer in the Royal Marines, earning my green beret in 1982. After leaving the marines, I’d gone into consultancy and also running outdoor activities, becoming a very experienced mountaineer. It’s possible that I am the best Type 1 mountaineer in the world based on what I’ve climbed. For example, in 2015, I climbed the north face of the Eiger. The international record for a solo ascent is just under three hours; for a team of two it’s normally six hours. I was 54 at the time and climbed it with a young man called (name to come), 22 at the time, and we did it in just under eight hours. I believe I’m the first – and currently only — Type I Himalayan mountain guide. I’ve climbed Cholatse, which is in the Nepalese Himalayas and over 6400m high. I took nine clients to the summit and back with a fellow climber (name to come). It is the most technically difficult Himalayan challenge. 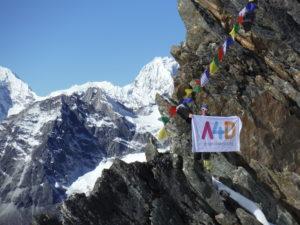 And what about his diagnosis?
Looking back on my diagnosis I think I know why I got it when I did, it was simply that I was under too much stress. It happened on January 31 in 2001. I was working as a freelance marketing consultant and I had two young children aged three and six. I was also training and going on Himalayan expeditions. On that particular week, I’d been on a course for five days then ended up working over the weekend too. I felt exhausted when I was driving home on Sunday night. I realized that my eyesight was hazy. When I got home my wife, who was once a paramedic ambulance driver, said she thought it was Type I diabetes after I told her my symptoms: drinking a lot of water, peeing, weight loss, the dodgy vision, feeling tired. It was all quite obvious looking back. I saw my GP on the Monday who sent me for a blood test then called me back on Wednesday with the diagnosis.

What is a typical day like?
Every day is different. I run two businesses out base in the southern French Alps with my wife renting chalets and apartments and I also run an another company where I’m guide Andy teaching and master classes. Then there’s also Outbase, which offers climbing courses for young people with top instructors. The aim is to be able to offer courses to all schools in order to help get young people outdoors more and beat the digital age. By doing so we can help prevent Type 2 diabetes, which is on the rise at least to some extent due to people not doing enough exercise. I’m also Blue Circle champion for the International Diabetes Federation and I do motivational talks at schools when I always say, ‘Move. Move away from the screen!’. I travel a lot and all I see is screen use. There’s also far too much sugar available and being consumed everywhere. It is amazing how available it is. Sometimes I’m out being an elite expedition leader too. So no two days are the same. 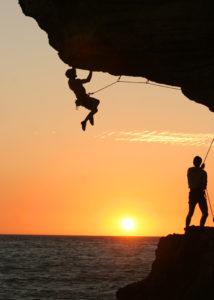 How does he manage his diabetes?
I’m on a pen and not a pump. I tried a pump for a couple of years but kept having problems. My HbA1c is at 6.8mmol. It is not the best, but is pretty damn good bearing in mind what I do and the fact that I manage it with insulin pens and blood testing. I blood test 5-6 times a day. I get some sponsorship from a company called LifeSystems for my climbing and they designed a special bag for me. It means can test wherever I am, even hanging in a harness from the side of a mountain. I keep it around my neck with my blood testing kit in it. My insulin pens are kept separately in insulated pouches, which I carry inside my jacket so the insulin doesn’t freeze as I am often in very cold places. Whoever I’m climbing with — and I always climb with someone — they have backup kit in case I drop anything.

What specific kit does he use?
I use a fairly old Bayer Contour XT blood test machine. It’s robust, the battery lasts forever, and it does not go wrong — it even works in the cold. However, I use Accu-Chek Softclix lancing device. It’s simple, strong, small. It’s also a bit old but it works for me. Diabetes is complex, you can’t get away from that, but I keep my approach to it simple — I learned KISS (keep it simple stupid) in the marines. I also use two insulins, a fast-acting Humalog from Lilly for which I use their Humapen and a prefilled Novo Nordisk Levemir pen. I’ve also used the Libre sensors and find them very helpful as additional backup. I took one up to 6400m but if you check the small print it says it’s only been tested up to 3000m.

What about hypos?
I have a Diabeteze carrycase that I use every day. It not only contains my meter but my money, passport and I carry a French brand of energy gel in case of hypos. I also carry basic supermarket cereal bars with me. I carry them on climbs and use them all the time.

Any advice for everyone else?
I don’t climb solo any more, just in case, I have my own kids to think of, and also the kids in the charity Action4Diabetics. There are now 150 of them and I want 500 on the programme by 2020 so I can’t take huge risks anymore. My catchphrase is ‘diabetes not an excuse’. We all make excuses sometimes, but don’t let diabetes be your excuse. For most diabetics, if you want to do something, you can. Don’t let it stop you from living a full life. Exercise is a secret we can all share. It can help with your diabetes control. You will have a few hypos, but your body gets used to it and you have fewer hypos, you know how to handle it. I want every diabetic to live a long, fulfilled life. If there’s one piece of advice I would like to pass on its to find other diabetics and talk to them. You learn a lot from anyone else you get much more support and confidence by talking to other people who have lived with it a while.”