The BiAP insulin pump, an update

In February 2014 we ran a feature on the development of the BiAP, a Bio-Inspired Artificial Pancreas. Here we catch up with Nick Oliver, Professor of Metabolism at Imperial College, who reports on current progress of the research. By Sue Marshall. 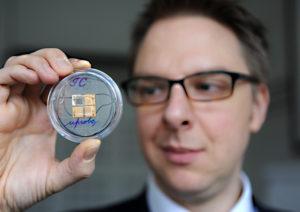 Dr Nick Oliver, Professor of Metabolism, Imperial College with the basics of the BiAP pump.

The artificial pump is a simple setup, in theory. Information from a CGM sensor feeds into an insulin pump. Within the pump there is an algorithm. The algorithm uses the CGM data to adjust the rate of insulin being delivered in a pump set for automated insulin delivery. The sophistication of the algorithm is key to accurate dosing. It seems likely that CGM sensors are not going to get much more accurate than they already are, although in the future there may be more contenders in the space (which, at present, is not very crowded). So improvements have to be found in the insulins used and the algorithms.

What is the BiAP?
The Bio-Inspired Artificial Pancreas (BiAP) is worn externally and combines a continuous glucose monitor that reads the user’s interstitial fluid sugar level. It also has an insulin pump that infuses the insulin into the body. The most innovative element is the biologically-inspired microchip which uses an algorithm to combine the CGM data with the pump’s capacity to infuse insulin. This has enabled the research team to replicate the activity of the beta cells of the pancreas using integrated circuits on a silicon microchip.  With this they have been able to “deliver insulin profiles expected from a healthy pancreas”.

Says Oliver, “Over time, these algorithms have developed and evolved. They can now include information on heart rate, exercise and even stress. Likewise, beyond just putting in a carbohydrate value, there are other things in the body that affect absorption other than glucose. Beta cells in normal people would also respond to levels of amino acids, fat and other factors, yet at the moment we rely on just a blood glucose reading and a carb count to calculate a bolus. An artificial pancreas is not conscious; it is not able to adjust to factors it doesn’t know about. So we are now working on algorithms to be adaptive and flexible, using additional information about activity and environmental factors. For example, a child at school may be in the playground one day and may be inside the next day due to rain stopping play. An artificial pancreas system needs to be able to adapt to that so needs the information.”

There is a lot of research going on regarding a closed loop (or artificial) pancreas with different approaches being taken to bringing a viable solution to people with diabetes. There are bi-hormonal pumps, which carry both insulin and a preparation of glucagon in separate chambers (arguably glucagon is not, at present, stable enough to be relied upon). It has been said that it’s important to get just one hormone right first, and that should be insulin as it is stable and proven. The subtlety of insulin delivery is core to a reliable artificial pump. Genomics are now being used to help assess the best treatments and delivery for cancer patients. Can similar insights be used in diabetes care to improve what treatments, when?

Bio-inspiration
The BiAP pump has been in development for about 10 years, since uber-engineer Chris Toumazou (Europe’s ‘top inventor’) started looking at how to improve medical devices. Says Oliver, “He had to start speaking with doctors, and we found that our terminology got in the way. When he was talking about ‘variable resistors’, as doctors we would be using the phrase ‘membrane channels’. Chris wanted to replicate a beta cell as an electronic system, something we ended up calling the silicon beta-cell. Once we’d gone beyond the difference in interpretation we were able to make something that was testable, and which worked. Having begun in 2006, it took five years to get the silicone beta cell from lab to clinic, with the first human study taking place in 2011.”

At that time, the study used the Medtronic Enlite CGM. Oliver explains, “As all CGM use interstitial body fluid, there’s always a slight lag in terms of getting an accurate reading, but the speed and accuracy should be sufficient for an artificial pancreas. However one person’s diabetes is individual — their hormones, their daily activity — are distinct to themselves. Algorithms can only respond to a glucose reading, therefore they are always reactive, and as a result it can be challenging to hit the target glucose and stay there. There are slow but sure improvements going on with all the factors comprising an artificial pancreas. Faster insulins are now on the horizon, which are likely to be an improvement. The newest Medtronic pump, the 670g, can be programmed for much greater automation, but still relies on manual bolusing based on glucose and carbohydrate information alone.”

Count us in
Which leads on to another question, should a blood glucose reading and a carb count be the only factors upon which to base a bolus? Says Oliver, “What about hormones, exercise? And, we know we can make mistakes estimating carbs. Can an artificial pancreas be more adaptive? I think that they can. In everyday life, with all of our decision-making, we adapt based on circumstances and what we learned last time. Over time, anyone using an insulin pump could build up a library of meals. If you tell it, tuna sandwich, and you have tuna sandwich once a week, you’ll soon get a fairly clear picture of what a tuna sandwich does to your blood glucose, especially if most people use the same bread type and stick to roughly the same size sandwich. From that, it ought to be possible for adaptive bolus advice to be available based on other variables, such as whether it’s a weekday or weekend, whether you’ve done exercise or had alcohol.”

Part of the current research being done with the BiAP is based on the system continuing to learn. It needs at least six weeks of data to give optimal feedback so that it is adaptive and personalised. At present, all other boluses types in other insulin pumps are based wholly on carb counts.

“We’ve done a feasibility study using an iPhone,” says Oliver. “It was much liked by the people who used it. The six-week study had just 10 people, but with just that small study group all glucose parameters were improved – HbA1c, time in range, and post-prandial blood glucose. At the moment we’re calling it ABC4D, which stands for advanced bolus calculator for diabetes.”

ABC4D takes into account not only glucose but also meal absorption which can be affected proteins and fats. Continues Oliver, “Calculating the protein and fat content of meals and altering insulin requirements all of the time would be just too hard for anyone. ABC4D relies on consistency, rather than being accurate so the more frequently you have certain meals the better it will learn from how your body reacts to that meal.”

The current study, integrating ABC4D with an artificial pancreas, uses the Dexcom G5 CGM sensor. This data goes via Bluetooth to the artificial pump controller, in this study it’s a smart phone using ABC4D. This information goes over to a Tandem T:Slim** insulin pump. Oliver clarifies, “That’s the architecture of the system, but you use the mobile phone to run the artificial pancreas. The latest study we are running has three arms: a sensor augmented pump, an artificial pancreas with a rule-based bolus calculator, and an artificial pancreas with ABC4D. All people on the trial will end up doing all three of these studies, six weeks on each with a two week break between when they go back to their old treatment regimen, before going on to the next part of the study. That should give a good indication as to which of those three options brings about the best blood glucose control, and which the participants find most useful and easy to use.”

Research on the BiAP*** is set to continue for a few years yet, as with all artificial pancreas systems. In the meantime, Oliver advises, “No matter what, technology is not a replacement for education. Keep learning about diabetes and how you can best manage yours by keeping informed about technological improvements.”

*Genomics – the study of genomes (a full set of chromosomes, all the inheritable traits of an organism).

**Tandem insulin pumps are not currently available in the UK.

***Research for the BiAP is being undertaken by Dr Nick Oliver and his team at Imperial College London and is supported by (info to come).