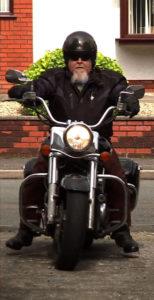 The report, which is due to be published in the May issue of the international journal Primary Care Diabetes. Shows a clinically significant improvement in HbA1c among those patients who watched one or more of PocketMedic’s Living with Diabetes films on their computer, tablet or smartphone. A strong correlation was observed between the number of films watched and the amount of reduction in HbA1c levels, with no reduction in HbA1c observed in a group of non-watchers.

Swansea University’s Professor Jeffrey W Stephens, one of the report’s authors, says of the results: “The overall improvement in HbA1c indicates that those who watched the films. Were more inform, motivate and commit to change their behaviour. This small-scale but real-world study suggests that the prescription of an online health information film. Alongside standard treatment, can afford significant benefits to the growing number of people. Who live with one or more chronic condition.”

A total of 11 films are in the PocketMedic Living with Diabete series, including: What is diabetes? What can I eat? Diabetes and weight, Looking after your feet, Stopping smoking, and Medication and monitoring. Two Primary Care practices identify 68 patients newly diagnosed with Type 2 diabetes and were ‘prescribed’ watching the films, alongside standard treatments. A routine blood test was repeated after a three-month period to monitor health outcomes.

Swansea University’s Dr Sam Rice, another of the report’s authors, explains the results saying: “Digital prescriptions encourage people to access expert health information, practical advice and emotional support from the comfort of their own home. Each motivational film can be watched by patients and carers as many times as required and, crucially, at a time when the individual faces a new health challenge.” 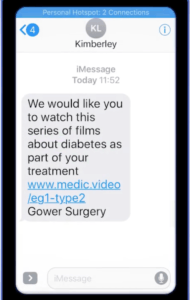 An example of a Pocket Media text message linking to a video about diabetes care.

The study showed that 28% of the patients watched at least one film within three months of being ‘prescribed’ the film-watching. Rice adds: “With patient self-management widely recognised as an increasingly important treatment. It is encouraging to see that this low cost. And scalable solution is reaching many more patients than would otherwise be the case. Through further research, we may even find that the success of the film-watching becomes a stepping-stone to facilitate. And encourage people living with a chronic disease to attend more structured educational programmes.”

Self-management skills are widely recognised as an increasingly important treatment that can have a major effect on an individual’s quality of life. Through being better informed, people learn to make small adjustments that, potentially, help prevent health complications associate with their condition.

The bite-sized, self-management films were produced by eHealth Digital Media in partnership with the report authors, Professor Stephens and Dr Rice*. Each film was reviewed by expert patients, clinicians and frontline healthcare professionals before distribution. 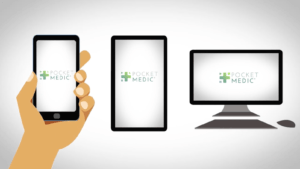 The relaxed and homely approach of the films is designed to encourage people to become aware of symptoms, understand causes and recognise risks. The highly visual and engaging content features high-quality health information from clinicians alongside the personal and real-life experiences of people living with diabetes or other chronic disease. Kimberley Littlemore, co-founder and creative director of eHealth Digital Media which produced the series of films, says: “With a growing number of people living with a long-term, chronic condition, the PocketMedic films provide a simple and cost-effective way of helping people become more expert in managing their health.”

“This is an exciting time for the PocketMedic team, says Joanna Lewis, co-founder and commercial director of eHealth Digital Media, “We’re talking with many CCGs about the potential benefits of film-based prescribing and we’re on track to roll-out the service, across the UK, by 2020. We’ve signed-up GP clusters and NHS Foundation Trusts, including Hampshire and Bath. We’ve received Welsh Government health innovation funding to allow all NHS Wales’ patients to access the Living with Diabetes film series.