My Diabetes Kit — The Grumpy Pumper 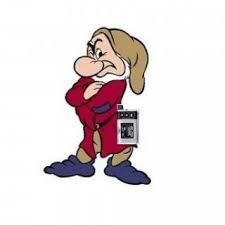 We can’t tell you his real name, as that would be breaking protocol, and we’d hate to blow his cover. This is the Grumpy Pumper, who has had Type I diabetes since 1995 when he was diagnosed at age 25.

Looking back he says, “I’m lucky I had 25 years without it, but I do remember my diagnosis really well as it happened on an August bank holiday in 1995. As early as May of that year my brother-in-law had said, ‘have you lost weight?’ I didn’t think much about it at the time. I’ve always drunk a lot of tea, water and so on, so that was not unusual. But I kept losing weight. I was eating more in order to try and put it back on. I felt tired all the time and was eating things like Mars bars drinking Lucozade for extra energy. I felt terrible though. Back then there was no internet, no Dr Google to refer to. The only thing I had to look at was my mum’s home medical reference book, so I looked up diabetes and thought, ‘yup’.”

Did he dash off to the doctors? “Being a typical bloke, and being busy, I put off going to the GP. But I’m 6’2” and was losing a few pounds a day; by the time I hit 10.5st I really was pretty skinny. One day I scared myself by nearly nodding off at the wheel. Realising I could really hurt someone I took myself off to the doctors. He did tests and told me to come back in a week. I went home and then he rang and said to come in tomorrow, which was a Saturday. He told me, ‘you have diabetes’. There was no mention of what type of diabetes, he phoned the hospital and got me a bed. I picked up a bag from home and went in. I thought I was never going to be allowed chocolate again, so I stopped off and bought a bar before I got there. I came out the following Thursday after they had stabilised me. I only realised how ill I had been once I started to feel better.”

Grumpy left the hospital with basic kit and information. He says, “I was given disposable syringes and a needle clipping device called Safe Clip. I had an old BD meter, I can even remember that it was optical — you had to clean the lens. I think it was called Refloflux; it took 15 seconds to countdown. I was also given some food information based on carbohydrate exchanges, such as one digestive biscuit was one carbohydrate exchange. I was told to eat three times a day and to have a snack in between meals.”

Analyse this
Grumpy started a bit of basic analysis of his blood test results. “At that point I was only really logging my blood test results, not really managing the control. I got by eating as normal and testing. I used a diary, at least I filled it in, but other than that I didn’t look at it much. I remember my first hypo though. It took a while before I had one, it was months after I’d left the hospital. I was underneath the kitchen worktop — I was fitting it into the house we’d just bought. I felt strange, did a blood test, and I think I took some dextrose tablets. I was prepared — I had some to hand even though I’d not had a hypo yet. Again, I was rather glad once I’d had it; now I knew what I was dealing with.” 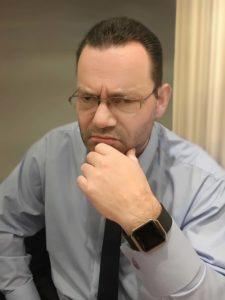 How does he treat his hypos today? “These days I use about half a bottle of Lucozade. There’s always a bottle in my car or in my bag although when I’m at home I’ll eat whatever’s to hand. I travel a lot and I always test before I drive. I’m often driving with my kids or with other people in the car, so I want to take proper care. Also, I can’t work if I can’t drive and I don’t want to lose my license, so I just test before I set off then do another test two hours later if it’s a long journey.”

Although he might go by the name The Grumpy Pumper, in fact he’s quite sanguine about his diabetes “I’m still not frightened by my diabetes nor am I angry about it. It happened. I was 25, had a job, and was about to get married; it was survivable.”

Today, Grumpy has a reputation for being a bit of a curmudgeon when blogging about diabetes. Put simply, he just thinks things could be better and he thinks that a lot of technology isn’t as good as it should be. For example, he’s tried CGM but does not think he needs to use it all the time. He says, “I think CGM is a useful tool, but insulin I need all the time, CGM not so much. Recently I’ve been working in London and there have been tube strikes. I’ve had to do a lot of walking, so I stuck a FreeStyle Libre sensor on, as I can’t always stop fiddle about to do a blood test while I’m on the move. It is easier just to look at the screen of the CGM reader and keep going.”

Dealing with diabetes and keeping going sums up his attitude to the condition, “I don’t let dealing with my diabetes get in the way of my day, but I anticipate and am prepared. I should be – even my job is about contingency planning. I might have diabetes 24/7 but I don’t manage it 24/7 I have a life. I’m lucky I still have excellent hypo awareness. If I wake up with a hypo at night, I might not test; I’ll treat it and go back to sleep.”

Face the music
How did His Grumpiness end up blogging? “I’d use Facebook keeping in touch with family. But when I went on a sponsored sports weekend, I set up a Twitter handle and kept it separate from my own life. Facebook was in my own name, this had to be different. The name The Grumpy Pumper just popped into my mind. I’m on an insulin pump and I’m a grouch. The name just worked. It’s ironic that I blog now, as I’m dyslexic. It had never occurred to me to do it, yet it really took off. I talk about my life, including my clinic appointments. HCPs are part of my support team but I’m not in awe of them. I don’t want people to be scared of their diagnosis. However, if they are not getting good care, they need to ask for it, and they need to know that. So on that front I am an advocate. I am not rude to people, I hope I do the blog with humour. My first blog was in December 2012, though I’d gone on a pump in 2011. I was given an Animus Vibe and sometimes used a Dexcom CGM. I was given this kit, wasn’t a choice back then, and I didn’t know enough about insulin pumps to know what to choose.” 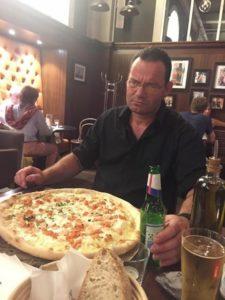 Does he have any reservations about using an insulin pump? “Nowadays I see the pump is an automated form of injecting,” he says, “I love it because I’m lazy. It can do things like address the dawn phenomenon, the fact that I tend to wake up slightly high. When it comes to food I do a rough form of carb counting and then estimate my insulin dose. I haven’t actually programmed ratios into my pump. I use how I feel a lot. I seem to know what’s going on. I pre-bolus when I can; the old school stuff is still good advice. He been teaching my son to drive and it’s weird having to stop and think how to describe something that I do automatically. That’s exactly how I feel about bolusing, I just do it.”

Does diabetes limit his eating? Nope. “Diabetes is not just about food,” he says, “Food is food. I’m not particularly adventurous eater but I know what I like. There’s a picture of me with an enormous pizza. I remember quite specifically it was as big as the table. I took 28 units and few hours later I was at 7.9mmols, the next morning I was at 9.3mmols. Overall my HbA1c is a fairly static 7mmols. No one can argue with those numbers. My HbA1c was at 10-12mmols before I went on the pump. A follower once said to me, ‘if you can eat what you eat drink what you drink and have HbA1c like you, then I can do it too.”

A selection of classic comments from His Grumpyness: