GlucoRx was formed in 2010, although its Sales Director Chris Chapman had been with its sister company, Disposable Medical Equipment Ltd for five years before that. He says, “We set up the company as we could see a way to save the NHS money. We could do that by bringing in products – including blood glucose meters, insulin pen needles and a skin care range – at a reduced cost to the ones they were currently buying. We wanted to bring in more affordable products without losing quality. When we started there were blood glucose meters from four main companies, each of which were charging ~£15 per pot of 50 glucose test strips to go with their meters. We were able to come in and offer our strips at just under £10 per pot.”

Chapman has been with the company since its inception, having previously spent five years in the Royal Navy as a Diver. He also spent 13 years as a Special Constable, finally ending that role in September 2016 due to work pressures, at which point he left the force at the highest position possible, as Chief Officer for Surrey Police.

From the get-go, Chapman sees the biggest challenge he has faced was to break into a market with an unknown name. He recalls, “We had to establish a brand when there were several strong brands already in the space. No one had heard of us, and we had no pedigree in the market place. But the best part has been creating a much better-known name. Our products are now stocked in almost all pharmacies in the UK. It’s great to see our stock on shelves almost everywhere I go, also on television – any fly on the wall documentary about Diabetes, I normally see two or three of our products.” 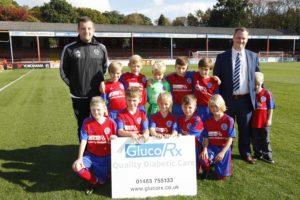 As with many people, Chapman has personal reasons for being involved in the diabetes sector. “Both my parents have Type 2 diabetes,” he says. “My father was diagnosed 10 years ago and my mother seven years ago. I have a real motivation to improve the lives of people with diabetes. I also suspect that I’ll be diagnosed with Type 2 myself. I frequently travel doing demonstrations of our products, performing blood glucose tests on the meters I am showcasing to healthcare professionals, so I know what the score is with my own blood glucose levels. I don’t need intervention yet, but I suspect I will do so in the future. If I end up on injectables, at least I know a good range of insulin pen needles and I already know how to blood glucose test!”

A kick in time
Married with two children, Lauren and Ryan, Chapman recently committed to sponsoring his local football team, Aldershot Town FC. “Most of us know we’re at risk of developing Type 2 diabetes as we live in a world where it is on the rise. It matters to me that my children understand the role of diet and exercise in staying healthy; beyond that I want all children to have an understanding of how to be well and stay well. That is why we sponsored the football team. I wanted parents – and indeed all the supporters – to ask about why GlucoRx was on the team’s T-shirts. It would mean taking the conversation about healthcare back into the home. I cannot think of any better medium to get this message across than football. Ryan loves nothing more then kicking a ball around on the pitch, so I’m really pleased to be sponsoring the youth team as well as the adult players. We hope to really raise awareness of diabetes and highlight preventative measures, such as increased exercise and a healthy diet.”

Looking to the future, Chapman says he wants to bring in new technologies, probably a form of CGM or a non-invasive way to test blood glucose. “Who knows,” he muses, “We may even bring in an insulin. It’ll be whatever diabetes healthcare needs where we can make a difference.”