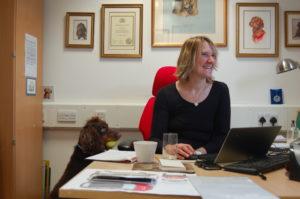 Dr Claire Guest founded the Medical Detection Dog charity a decade ago, and has a lot of experience with dogs. People unfamiliar with dogs may wonder about the extent of all these claims. They would need to look at her CV, while proof of dogs’ abilities in this arena of detection is growing and being validated every year.

Guest says, “Many dog owners may have anecdotes saying that their dog was alerting them to something including, if they are diabetic, the fact that they are having (or are about to have) a hypo. Both odour and behaviour could be indicators of their owners having a hypo, so this is something we can focus on in the training. We also collect breath and sweat samples of scent from diabetics experiencing a blood glucose level of 4.5mmol or below. If a person has no awareness, they may not be able to do samples in time, so if they have a partner we might ask them to help to gather them.

“Initially, we train all dogs to be aware of the blood sugar level of around 4.5mmols, but later training specifically matches the dog to their owners own hypo status. It means that the dog can tell the difference between their owner or handler just being stress, as opposed to having a hypo, or their owner’s hypo as opposed to the hypo of someone else who might be in the room. We collect samples by using pieces of materials in placed in plastic bags that the person has to breathe on. We always keen to have more people helping us out with this. If they starting to have a hypo they just breathe on a swatch of material as provided to them then place it in the freezer to send to us at a later date.

“With the dogs we start with general training then go on to specific client training. Where the dog is only awarded for responding to its owner’s hypos. The training process involves a specific smell being a cue for them to do something. To alert their owner that something is happening that they need to address.”

At the moment the Medical Detection Dogs charity has 55 live partnerships is roughly 40 dogs in training and about 75 of which are likely to be placed diabetics. Guest says, “We have many cross-breeds as they tend to show something called hybrid vigour. The choice as to whether they stay the course is down to personalities of the dogs; they have to be able to handle it.”

Costs of dog training are quite considerable, but then they have a huge responsibility, literally being relied on to save lives in some cases. However, as everyone is aware, diabetes is an increasing cost to the NHS: a single incident where a diabetic has to be taken into A&E due to a hypo or a hyper can cost, per admission, in the region of £1,200. When it comes to quality of life for some people with diabetes, a hypo dog is worth every penny.

Looking to the future, Guest says, “The business is growing and has its own challenges. I started it in order to help as many people as possible. It’s what keeps us all going. We’ve done work on quality of life showing that people fear hypos. And that by having a medical detection dog they show a statistically significant improvement. And have fewer hypos. They also tend to show a drop in overall their HbA1c levels, although that is not proven as statistically significant yet. We’re working on it!”