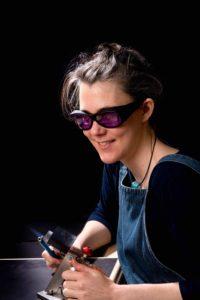 Rebecca Weddell is nearly 42 and ‘turned 30’ in diabetes years in May 2016. Weddell’s career is a creative one, as she is a glass artist. She says, “What I do is incredibly niche. My target customers are jewellery makers, so I sell my work online to people. Who make jewellery to wear or sell either directly or under contract to shops. And I make my own jewellery too and have stuff on display in my gorgeous workshop. But to be honest my ideal work day is to sit at a mesmerising torch flame and turn out unique artisan beads one after another.”

Glassblowing used to be Weddell’s hobby, then it became her day job. She says,  “When it became my job. I lost a hobby, so I joined a gym. Back then, I would think twice about going out depending on what my blood sugar reading was. But since going on an insulin pump I feel so much more in control. I have always considered that my diabetes is in fact the biggest and most important part of my life; it’s a full-time job in itself. However, I am fortunate, being self-employed, that I can take time out for hypos or pump-cartridge changes, or take the afternoon off or work 20 hours a day if I want to. I find my working life and my diabetes life much easier to deal with now I’m self-employed.”

Weddell was diagnosed in 1986 at age 11 after her mother noticed she had suddenly lost weight. Weddell remembers, “I was tall and started to look very ill and I was awfully thirsty all the time. She took me to the doctors and I ended up at the Royal Alex Children’s Hospital in Brighton. I went on to two injections a day. I remember mixing the two insulins together in one syringe, which I quite liked doing.”

Back then, she didn’t have a blood test meter but she remembers, “When I did get a blood test meter it used to take about three minutes to do the test and it needed a big blob of blood. It was always kept at home, it never came out with me. We have a chart blue tacked to the door where we filled in my results but we didn’t understand how to use this primitive data. How things have changed. A while after that I went onto multiple daily injections (MDI), using Novopens.” 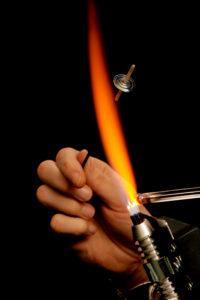 In terms of her overall control, she remembers, “I always erred on the side of low, not high, with the guidelines i.e. between 4 to 7mmols, and no more than 9mmols two hours after eating. Trying to stick within such tight deadlines frequently left me with a lot of low blood sugars. I discovered that if I tested one hour after eating it would be a lot higher than 9mmols, so I often I put more insulin in to address that. It was literally an ‘overdose’, as I’d have a hypo later in the afternoon. I suppose I just didn’t understand all the advice properly. If you test two or three hours after eating, not one hour, you’d be more likely to be in range.”

Things moved on, and after doing her local area’s DAFNE equivalent course (called SADIE) about 10 years ago, she started on an insulin pump a year ago, in October 2015. “I went on the Accu-Chek Insight and it’s amazing,” she says. “I know people can wear pumps on waistbands, in pockets, or suspended from items of clothing on the outside. Some pumps need to always be accessible, but mine can be out of the way all of the time (not that I’m ashamed of it). It can be completely tucked away all the time and not needing to be fished out and fiddled with every time I need to do something on it! The remote does all of that for me, so I can completely forget that I’m wearing it. It uses pre-filled cartridges so whenever I run out of insulin it’s a very, very straightforward procedure involving just a cartridge and an infusion se, no vials or reservoirs or syringes. Plus, the handset is quite attractive in its own right. I love a good gadget!”

“I found pumping insulin such a change to using separate basal and bolus insulin pens, it’s a whole new way of life. In that respect, I am pretty certain that whichever pump I had ended up with, I would be equally delighted with, simply because the pump is representative of my new diabetes lifestyle and has finally, after three decades of living with diabetes, made my diabetes a much smaller, more manageable part of my life, rather than the thing I wake up and go to bed thinking about. It has given me my life back. I wish I’d asked to go on one sooner.”

In February this year, Weddell also tried out a FreeStyle Libre sensor, “just out of interest”, she says, “I’m rather addicted to it now. I feel like I couldn’t do without it, although I’m not sure I can afford to use it all the time. I love taking a reading, even the sound it makes, the little ‘bip’ means that a line is coming… It shows me a line on a graph on the screen and I find that very useful and like looking at my line frequently! It’s so easy to use; the reader can scan through several layers of clothing, which is incredible. It’s a great aid and with the pump, if my levels are a bit high I might not do a bolus to address a blood test result, I might amend my basal rate instead and avoid having a hypo.”

Fully kitted out, Weddell now feels that using the pump and the sensor combo has helped her to make some other changes, “They’ve given me the freedom to try some new things. With the pump, I don’t have to eat if I don’t want to, whereas before I felt I had to. When I was diagnosed, we were taught that a specific amount of carbohydrates in grams had to be taken at a certain time. You had to feed the insulin that had already been injected in. Now I’m trying to eat lower carbs. The other night I made lasagna with beetroot slices instead of the pasta sheets, it was delicious and low-carb. I often only have boiled eggs for breakfast, no toast. A lot of control isn’t just about the insulin, it’s about the food itself. Food is the enemy in many ways, but it’s also the medicine. It will raise your blood sugars but if you’re low you need it to raise them again. It’s a weird condition, but it is getting easier to live with!”

Call for input for design of carb counting app