Cured food and the diabetic diet 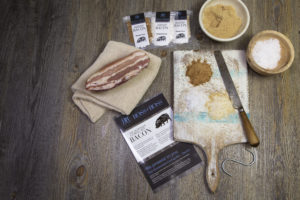 Ross & Ross’ The Homemade Curing Kit… Bacon contains everything you need to create great tasting original, sweet and smoky bacon in your own home. All you need to do is add the pork.

For centuries people have been using cures on meat and fish in order to preserve food. Once a regular household undertaking, cures then became the preserve of specialist producers. However, more and more trends are based on domestic cooks taking such tasks back into the home. The food people most frequently buy that has been cured is that Great British institution, bacon.

Curing is done using either salt or sugar (both of which are demonised in much modern media). The point of using them is to draw moisture out of the food by the process of osmosis. Curing often also involves using spice, smoking and sometimes cooking the food too. This means that the food is protected against being infiltrated by microbes so they would not rot. Cured products became less necessary once refridgeration became common. But they are making a comeback. Within the diabetic diet, such foods can be accommodated, but as you will read here, curing involves both sugar and/or salt, so bear that in mind when you indulge in any! Perfectly OK as part of the diabetic diet, cured foods should be regarded as a treat.

Ross & Ross Food is a small, multi award winning fine food company based in the Oxfordshire Cotswolds which specialises in handmade British food gifts and event catering. Their focus is on celebrating the best local Cotswolds produce, including local artisan treats in their foodie gift boxes. The company was founded by Ross Bearman and Ross Whitmill. Between them, Ross and Ross have over 30 years’ worth of experience in the food industry. The pair met whilst opening two gastro style pubs for the Peach Pubs Company. They gained their experience with fine food from the likes of Raymond Blanc and Paxton & Whitfield. They founded Ross & Ross Food together four years ago. Whitmill says, “There’s such a huge trend for these DIY cooking processes now. As a chef, I’m a big fan of anything that gets people into their kitchens, and these kits are definitely doing that. It’s a great way to support your local butchers and fishmongers as well – they’ll sort you out with the best meat and fish which is very important if you want good results!” The first in their range, The Homemade Curing Kit… Bacon, was launched in October 2014 and has since received national media coverage and international attention. They subsequently added The Homemade Curing Kit… Spicy Bacon, which introduced some more unusual cures taking influences from flavours like gin, classic pork charcuterie and the British love of spice, for truly different bacon for the adventurous home-based foodie. The most recent addition to the range is the Homemade Curing Kit… Salmon. They collaborated with fellow award winning local Cotswolds producer The Cotswolds Distillery to bring a gin cure, along with a beetroot and a smoky cure, for classic flavours of cured salmon. All three cures take just three days to create truly gorgeous tasting salmon. 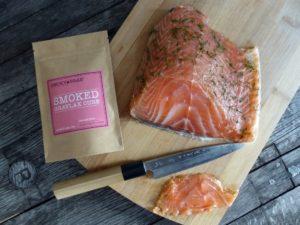 The Cures (information from Wikipedia)

Salt: Table salt is the primary ingredient used in meat curing. Removal of water and addition of salt to meat creates an environment where osmosis can draw water out. It also slows the oxidation process, effectively preventing the meat from going rancid.

Sugar: The sugar added to meat for the purpose of curing it comes in many forms, including honey, corn or maple syrup. However, with the exception of bacon, it does not contribute much to the flavour but alleviate the harsh flavour of the salt used in curing. Sugar also contributes to the growth of beneficial bacteria by feeding them.

Smoke: Smoking meat means exposing it to smoke from burning or smoldering plant materials, usually wood. Smoking helps seal the outer layer of the food being cured, making it more difficult for bacteria to enter. If the smoke is hot enough to slow-cook the meat, it will also keep it tender. One method of smoking calls for a smokehouse with damp wood chips or sawdust. Woods used include such as hickory, maple, apple and cherry.

Nitrates and nitrite: These not only help kill bacteria, but also produce a characteristic flavour and give meat a pink or red colour Nitrite is generally supplied by sodium nitrate or (indirectly) by potassium nitrate. Nitrite salts are most often used in curing. Nitrate is specifically used only in a few curing conditions and products where nitrite (which may be generated from nitrate) must be generated in the product over long periods of time.

NOTE: Cured meats, especially those that are smoked, are considered by the WHO to be carcinogenic, also be wary of the effect on your blood sugar of cures that use sugar. The secret is to keep these products as treats. Have small amounts infrequently.