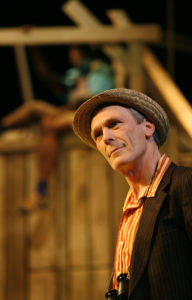 Steve Jacobs is a professional actor based in Cornwall and recently on tour with Miracle Theatre in Life’s A Dream. In his career he’s played Estragon in Waiting for Godot, Sherlock in The Death of Sherlock Holmes, King Lear in Lear, Lennox in Macbeth (for the RSC) as well as putting in appearances on the small screen in Inspector Wycliffe, Mapp and Lucia and The Bill.

These days he mostly works with theatre companies based near his home in Cornwall, these being Miracle Theatre, where he often has to play more than one part in a play, and WildWorks, where every show is an adventure. He is particularly fond of this company as the plays are undertaken in open spaces. He says, “We work in different locations such as a castle in France, a harbour in Malta, a derelict war-torn location on the green line in Cyprus, or actually inside the tin mines of Cornwall. This touring company is a collaboration between theatre practitioners, artists, musicians, choirs as well as local communities. Occasionally I do a little TV. I’ll be making a brief appearance in the new series of Poldark where I play the landlord of the London Inn on Bodmin moor.”

An actor’s life is rarely a steady one, yet Jacobs has undertaken the last 35 years of his career while juggling his Type 1 diabetes. He had just completed his studies at the Guildhall School of Music and Drama in London when he was diagnosed, aged 22, after a brief period of illness. He says, “I recall my diagnosis vividly, though it’s now nearly 35 years ago. Although I’d been born in London and came back to study there, I was raised in Cornwall and had just been offered a job there. I was due to travel down there are start a new acting project, and it was a big one.”

Double jeopardy
What had driven him to the doctors was a dose of thrush and only when he started to talk about how he was feeling did he realise that he’d also lost weight and been thirsty and had recently been unexpectedly ill. “I expected to get a tube of cream, not a diagnosis that would be with me forever. The doctor was kind. I hadn’t gone to the GP but walked into St Barts Hospital. Once I explained my dilemma about the job and he said it would be possible to go, but I’d need to go straight to hospital when I got there, and that the adjustment to the new life would not be easy. So I set off. I had a diabetes manual in one hand and a great big script for a play in the other. I didn’t have a blood test machine but I did have a box with a glass syringe in it and a vial of insulin and some needles. I did have some urine sticks. I started on one injection a day using that glass syringe. I’ve used it since as a prop, and I still have it! I played Sherlock Holmes once and used the syringe to pretend to take my opium! I was very strict with my diet and did exactly as I was told. It was a massive learning curve, as was the script.”

The only upside he remembers from this time was that when he had to break for a meal, no one quibbled. If it was lunchtime for Jacobs, the cast just accepted it.

Currently Jacobs attends Truro’s Royal Cornwall Hospital. He went on multiple daily injections in the last 1980s when the insulin pen became available which he felt did make life a lot more flexible. But he’s taken a long time to adapt to using human insulin (that being the one grown in vats on bacteria, as opposed to insulin sourced from animals). He had a bad series of hypos when he was first transitioned, so he went back to animal insulin. “I didn’t get any hypo warning signals. I had a hypo in a swimming pool, and I had one when I was holding a kettle full of hot water. In both cases it was really scary and I just didn’t think I was safe on it.” 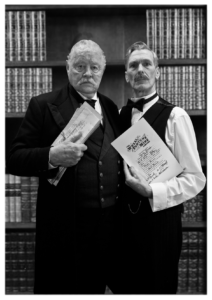 Dudley Sutton (on the left) and Steve Jacob in the film version of Tin.

With some persuasion he gave it another go several years ago but came back to animal gain, then only in the last 18 months has he been able to get to some sort of grips with human insulin, though he says he’s still trying to find the balance. Showing the changing times, his 17-year-old son Jowan (the Cornish form of John) was diagnosed with Type 1 when he was 12-years-old and went straight on to human insulin. Jowan also tried an insulin pump, but as he’s a keen surfer he found it did not fit in with his lifestyle, though he can go back in it anytime. However Steve is now considering going on one, saying, “As you will imagine, diabetes does throw up a few issues whilst touring and also driving the truck means I have to focus on keeping levels stable. It’s not always easy so I’m thinking about going on to a pump in case that can improve things at all. I’m waiting to find a window of time between productions so I can concentrate on going on a pump. At the moment I’m lucky to have quite a bit of work on.”

As well as his son joining our group of people living with diabetes, Jacobs can clearly remember his Auntie Rita who was Type 1 and he remembers her doing her injections. His other children, Luke and Georgia are so far clear of the condition. Jowan, as well as being a fellow diabetic, is also an amateur actor. Jacobs recalls catching the acting bug when in the original Poldark series was filmed and his whole family ended up as extras. “I was at school at the time, but we were either let off (or I skived off, I can’t remember), but I was in it as an extra and so were friends and parents. We were solders and miners and met all the actors who were in it. I even got paid for it!” 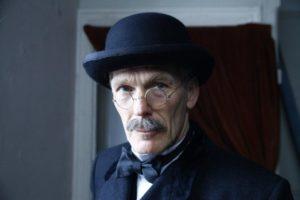 Steve Jacobs in the stage version of Tin by the Miracle Theatre.

There’s no doubt Jacobs leads an interesting life that requires a lot of travel as well as plenty of unavoidable and unmovable deadlines – if he’s in a show he has to be at the venue with time to spare without fail. “There’s not much routine with my job,” he says, “Each project is different. I’m very lucky that I’ve never had a bad hypo on stage. I remember one opening night when I felt myself going low, so I was stood in the wings madly chewing on sweets and drinking coke. I was a bit shaky at the start of the play. But I test a lot and I run my sugars a little high if I’m going on stage and I can’t test for a while. I’ll test two or three times before the show and then at the interval.”

He sometimes suffers from normal nerves before a show and he’s noted that, “It can be a challenge between going into a hypo and just being nervous. You can be shaky and ratty and sweaty just from nerves as well as from a low blood sugar. They can be very similar feelings. You can be anxious about going low and actually be having early hypo symptoms – it can be confusing. I do a test to check what’s creating the symptoms. I’ve treated a ‘hypo’ without testing and realised later it may not have been a hypo. I use an Accu-Chek Mobile blood tester, which is great for keeping close to me all the time. No test strips or separate lancets. I tend to keep everything in a Desang Classic kitbag. I’ve had one for about 10 years. Everything fits in and it also opens out to be a little desk do you can do a test easily anywhere. It’s brilliant.”

When it comes to hypos, he buys Glucotabs in bulk online for himself and his son. But usually if he feels a low coming on and he’s out and about he’ll buy some chocolate. He also keeps some dried fruit in a tin in his rucksack which he finds keeps him going if needed.

Much of Jacob’s work with Miracle Theatre and WildWorks is outdoors, either in open-air theatres or in other open spaces. He says, “I have a license to drive the lorry with our gear in it, but I have to see a consultant in Plymouth to have it renewed. Because so much of our work is open air we are constantly battling the elements, but our audiences are loyal. They bring sou’westers and flasks of brandy, but the actors just have to keep going in gales or hail. It’s very rare that we cancel. The Minack Theatre in particular is stunning. The show sometimes pauses if a shoal of dolphins goes by in the bay behind it.”

Find out more about the Minack Theatre and also what WildWorks get up to. Lastly, you can also look into the Miracle Theatre.