Cycling from Italy to Singapore with Type 1 diabetes

Two cyclists have set off from Italy with the aim of reaching Singapore in a year-long adventure. One of the riders, Chiara Ricciardi, has Type 1 diabetes and needs to ensure her insulin is maintained at the right temperature during the course of the trip. Chiara, an engineer, is travelling with her partner Riccardo Rocchi, a photographer and between them they dreamed up the challenge of using pedal power to get them from Cesena in Italy to Singapore, 18,000km away in Asia. They are taking all precautions for safety. Ricciardi is supported on her journey by diabetologists Paolo Di Bartolo and Tosca Suprani, who will be additional watchful eyes on this long undertaking. They have planned a network that will ensure they have a regular supply of insulin and diabetic aid along the way.

For the relationship between exercise and diabetes, they took the advice of Marco Peruffo, a diabetic athlete who climbed mountains over 8,000 metres high without oxygen. Peruffo’s long CV of ’extreme experience with diabetes will be in contact with the cyclists during the trip. They say they will cycle eastwards for more than 18,000km ‘for a piece of cake’, because cake means celebration yet is often off limits to people with diabetes. Exercise is fundamental for people suffering from diabetes type I, since it significantly reduces daily insulin requirement. Ricciardi does not want to defeat diabetes but she does want to show that it can be a fellow traveller. 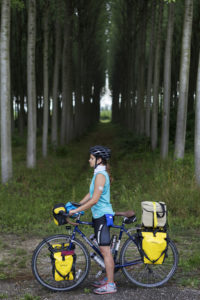 For a piece of cake : Ricciardi is getting from from Cesena to Singapore by bicycle.

Ricciardi was diagnosed with Type 1 diabetes in 2001 at the age of 11, initially using multiple daily injections before going on an insulin pump in 2007, which she says made her life easier. She combines her personal passion for artistic gymnastics with carbohydrate counting, helping her to live with what she calls a ‘lazy pancreas’. Diabetes accompanied her studies between Bologna, Lisbon and Sydney until she obtained her degree.

The cycling couple will use pedal power to navigate their way through numerous countries over continents and aim to complete an average 1,600km a month. Rocchi, a professional photographer, explained why they have decided to embark on such a long journey aboard bikes saying, “Bicycles are slow means of transport that allow and oblige you to see everything that is on your way, not just to jump from one highlight to another, missing the authenticity of the region. Also, the bike means daily physical exercise, therefore a healthy lifestyle. Chiara does not intend to defeat diabetes but she does want to show that it can be a fellow traveller in every pedal stroke from Cesena to Singapore.”

Tackling some of the toughest terrains, often via routes in remote regions in extreme weather conditions, means Ricciardi has to have her essential diabetes medication and equipment on board her bike throughout the entire epic journey and ensuring it remains at the right temperature is critical. To maintain temperature stability for her vital diabetic drugs, UK-based Peli BioThermal has supplied its Crēdo ProMed, a robust, temperature-controlled portable medical transport bag designed for emergency first responders and medical couriers to ensure protected pharmaceuticals remain intact; however it is still recommended that a person with a first aid training hamilton course is around at all times. Riccardi currently uses a Medtronic pump with a Bayer blood test meter.

During their cycling trek Ricciardi and Rocchi hope to inspire people living with diabetes and debunk some of the myths related to the condition saying, “While on the road, we would like to emphasise the message that a healthy lifestyle and careful therapy can let anyone living with diabetes lead a life full of ambitions.”

Click on For A Piece Of Cake project progress go to