It is estimated that one in 100 people in the UK has Coeliac Disease, but only a quarter of those are diagnosed and follow a gluten free diet. But apparently more than 12 million people in the UK – 80 times the number of diagnosed Coeliacs – follow a gluten-free lifestyle by choice. Wheat is a mainstay of the British diet and has been for centuries, but it’s recognized as the culprit when it comes to coeliac disease because of its high gluten content. Traditionally a cheap ingredient, it is used in many processed foods simply as a filler although it arguably adds neither quality nor flavour to the finished product.

If you have Type 1 diabetes and are diagnosed with coeliac disease, your blood glucose may change after you start the gluten-free diet. This can happen because taking gluten out of your diet allows the lining of your gut to heal so absorption of nutrients, including carbohydrate, will improve. You may need to keep a closer eye on your blood glucose levels and talk to your diabetes team about your insulin requirements. 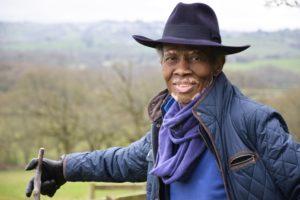 Wilfred Emmanuel-Jones is The Black Farmer, and he’s also a gluten-free advocate. He ways, “When I launched The Black Farmer brand several years ago I wanted it to be for everybody. But I also recognised that there was an increasing incidence of people with Coeliac disease or with a sensitivity to wheat and gluten, often including those with Type 1 diabetes, who needed to follow a gluten-free diet. I didn’t see why they or their families should be penalised by having to eat very much for expensive and often tasteless food. The Black Farmer was the first brand to be a dedicated gluten free great tasting fresh food brand available in the mainstream and my promise to this day is that every product under The Black Farmer label will be gluten free.”

The Black Farmer has gone so far as sponsoring a research project with students at Lancaster University Management School to discover the motivations behind people choosing gluten-free as a lifestyle choice. “It is so exciting to be working with a group of students from Lancaster University on this project, which in itself is fascinating,” he says, “They have a fresh approach and are as enthusiastic as I am to find out more. I’m sure they will come up with some interesting and revealing findings.” 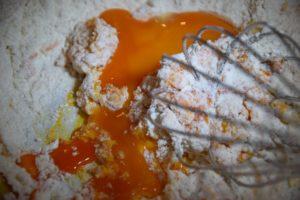 Farm fresh
In the meantime, a quick tour of the current Black Farmer branded goods will show you a range of meat products, especially pork, as well as some other additions. Clearly, most of these products would not have any gluten in them anyway, wuch as cheese and eggs, but sometimes flour (and therefore gluten) might be in foods such as sausages, so as a brand this stands out as being reliably gluten-free.

The Black Farmer’s innovative Roast in the Bag Sage & Onion Pork Loin Joint is the brand’s first move into the convenience sector. A second ‘Chilli & Garlic’ flavour variant was launched in March of this year. Using the latest roast in bag technology this ready-seasoned loin joint is oven-ready. A technology well tested and understood in the chicken category, The Black Farmer product is the first branded entry into the pork category. “Consumer research indicates that a real barrier to purchasing pork is driven by lack of cooking confidence and the fear that the roast will be dry or tough and bland,” says Emmanuel-Jones, “This product addresses and overcomes all of those issues and, as with all our products we are using only British RSPCA assured pork.” 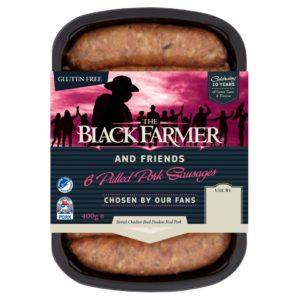 It’s another pork product that tops the polls for The Black Farmer fans. The brand asked its fans to choose a new sausage flavour, ‘pulled pork’ romped home with over 40% of the vote. Now available in Sainsbury’s, Co-Op and Budgens stores. “Pulled pork is very much the product of the moment,’ says Emmanuel-Jones, ‘But I believe we are the first to combine it in a sausage. The flavour is outstanding, and very, very moreish!”

The Black Farmer’s Sweet Mature Cheddar Cheese is the brand’s first dairy product and is currently available in selected Asda stores. it uses 100% British milk and is made using the traditional craft of ‘cheddaring’ by hand-piling and turning the curd. And The Black Farmer’s eggs are, according to Emmanuel-Jones, “really exceptional quality eggs, and hugely popular with cake and pasta makers. But for me it’s an everyday treat to have such a deep, rich yolk. So if you like a simple boiled egg or want to whip up a sponge, the colour and flavour are perfect.”

Who is the Black Farmer?
Wilfred Emmanuel-Jones was born in Jamaica and came to the UK at a young age and was raised in inner city Birmingham. He left school without gaining any qualifications. He worked as a chef before pursuing a career in the BBC, becoming a producer/director mainly working on food and drink programmes. He is credited with bringing many of the top celebrity chefs to the small screen including Gordon Ramsay, Antony Worrall-Thompson and James Martin. Later he founded a food and drink marketing agency in London then in 2000 he bought a small farm on the Devon/Cornwall border, and eleven years ago launched The Black Farmer gluten free food brand. These products are now available in all major retailers including award-winning gluten free sausages various other meats as well as eggs and cheese. In September 2009 he launched his first The Black Farmer Cookbook (published by Simon & Schuster).