A clinical study evaluating a new hypothesis that an inexpensive drug with a simple treatment regimen can prevent Type 1 diabetes has been launched and is looking for participants.

The autoimmune diabetes Accelerator Prevention Trial (adAPT) is led by Professor Terence Wilkin, of the University of Exeter Medical School, with support from colleagues at the University of Dundee and NHS Tayside. Initial funding of $1.7 million is being provided by JDRF, the leading global organisation backing Type 1 diabetes research. The study aims to contact all 6,400 families in Scotland affected by the condition, with a view to expanding into England at a later date. Children aged 5 to 16 who have a sibling or parent with Type 1 diabetes will be invited for a blood test to establish whether they are at high risk of developing the disease. If so, they will be invited to take part in the trial. Researchers will then examine the impact of administering metformin, the world’s most commonly prescribed diabetes medicine, to young people in the high-risk category. If successful, the large-scale trial could explain why the incidence of Type 1 diabetes has risen five-fold in the last 40 years, and provide a means of preventing it.

Researchers have previously hypothesised that Type 1 diabetes is an autoimmune disease caused by a faulty immune system which attacks and destroys insulin-producing beta cells in the pancreas. Clinical trials have tried drugs that supress the immune system to attempt to subdue the attack, but the results have so far been disappointing. The Accelerator Prevention Trial is the first to test an alternative explanation for Type 1 diabetes, and is based on the accelerator hypothesis, proposed in 2001 by Professor Wilkin. This hypothesis theorises that autoimmunity occurs as a response to damaged beta cells. It believes that beta cells, stressed by being made to work too hard in a modern environment, send out signals that switch on the immune system. The adAPT trial will test whether metformin, which is known to protect the beta cells from stress, can stop the immune response that goes on to destroy them.

Professor Wilkin says, “We still have no means of preventing Type 1 diabetes, which, at all ages, results from insufficient insulin. We all lose beta cells over the course of our lives, but most of us have enough for normal function. However, if the rate of beta cell loss is accelerated, Type 1 diabetes develops, and the faster the loss, the younger the onset of the condition. The accelerator hypothesis talks of fast and slow Type 1 diabetes – beta cell loss which progresses at different rates in different people, and appears at different ages as a result.”

It is estimated that 80,000 children develop Type 1 diabetes worldwide each year. There is currently no way of preventing childhood diabetes in children and no cure. In the trial, each child will receive metformin or placebo initially for four months, during which they will be tested three times to assess how their metabolism and immune system respond. The first stage of the trial will assess safety and whether the trial design works, whether the medication can reduce beta cell stress, and how many participants will be needed to progress the study. If the trial medication is found to lower beta cell stress effectively, the children in stage 1 will progress into the next stages of the trial.

“It is possible that a modern environment accelerates the loss of beta cells by overworking and stressing them,” continues Professor Wilkin. “As a consequence, this could be contributing to the rising incidence of Type 1 diabetes, which is appearing in ever younger age groups. adAPT will use a medication to protect the beta cells from the stress, so that they survive longer. If successful, the trial will offer a means of preventing Type 1 diabetes with a cost-effective medication, and could be made immediately available to children at risk.”

Professor Wilkin is carrying out the research in collaboration with Professor Stephen Greene of the University of Dundee and the Tayside Clinical Trials Unit. The trial is launching in Scotland because the country has the third highest rate of Type 1 diabetes in the world as well as a highly efficient record linkage system to identify affected families and a cohesive group of paediatric Diabetologists. 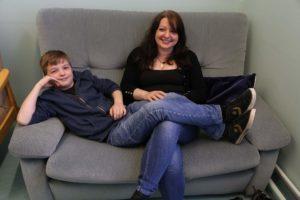 Cale Hutchison with his mum, Lynsey.

Tayside is the first centre to start to recruit for adAPT, but the study will roll out to the other 10 health boards in Scotland before crossing into England. Professor Greene, who is also Director of the Scottish Children’s Research Network, added, “The adAPT trial is an extremely important clinical trial and it is appropriate that ScotCRN, with the Universities of Dundee and Exeter and NHS Scotland are driving forward this exciting project. A simple, safe and effective drug that would prevent the development of Type 1 diabetes in young people would be a major breakthrough.”

Cale Hutchison (age 12) chose to sign up for the adAPT trial after seeing how type 1 diabetes has affected his father, Mike, who lives in Stornoway.“I have always been aware that my dad had diabetes, He has an insulin pen and has to inject himself three times a day so a lot of the time if we’re going out he has to do that first as it helps manage his diabetes. He had a hypo one time a few years ago when I was staying with him and it was weird and scary because he wasn’t acting the way he normally would. I was at the hospital for a doctor’s appointment and my mum noticed the poster for the adAPT trial on the wall. We read it and obviously fitted the bill perfectly so I said I would take part. I want to help prevent other people getting diabetes but I also want to know if I am likely to get diabetes. It’s not something that worries me as such but it is something at the back of my mind and it would be good to know if I was no more likely than my friends to develop diabetes. I would say that other kids and teenagers who are able to take part should do because if you can help prevent this illness then that’s something you should do.” 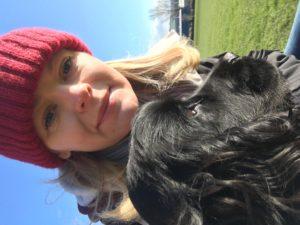 Fiona was three years old when she was diagnosed with Type 1 diabetes in 1984. “I was playing the chief angel in a nativity. My gran was watching with my mum who, for some reason, mentioned that all I did was drink and pee. Gran instantly recognised them as symptoms of diabetes and from my stage debut I was taken straight to the GP and then into hospital. My mum never said I couldn’t do anything but there was always concern about whether I had enough food if I was going anywhere and whether the people I was with would know how to deal with the situation if I had a hypo. Things like food and medication times have to be negotiated when you have a diabetic child and there are implications for siblings too. Although there wasn’t really anything I wasn’t allowed to do or eat, everything had to be in moderation, which meant moderation for my sister as well. She also had to learn to recognise the symptoms of a hypo and go and get our mum. I suppose it was quite a burden for her when she was only 5 or 6 herself. I was given an insulin pump two years ago whereas previously I was injecting and it has made things so much better. I still have to be cautious about exercise in case I bring on a hypo and if I’m going for lunch with friends, for example, I’m restricted to when I can go so I don’t deviate from my routine but this has been with me nearly my whole life so I don’t know any different. It’s great that this trial is focusing on Type 1 diabetes and hopefully it will help prevent cases in future.”

Desang Diabetes Magazine is our free-to-receive digital journal (see below). We cover diabetes news, diabetes management equipment (diabetes ‘kit’ such as insulin pumps and continuous glucose monitoring equipment) and news about food suitable for a diabetic diet including a regular Making Carbs Count column. We just need your email address to subscribe you (it really is free, and you can easily unsubscribe should you wish to).
Sign me up!
For Email Newsletters you can trust.
Open publication
Buy a Desang kitbag

Latest issue! State of the Unions looks at companies and devices working with each other