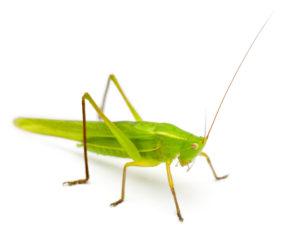 Helen Foster’s blog is about ‘not normal eating’. She has made some interesting discoveries recently, having investigated bars made from insects, sugar-free chocolate, and what her ‘Marmite face’ looks like.

There was much excitement in Not Normal Towers this week when the postman arrived as one of the packages he was a carrying contained samples of Crobar – aka the first product for sale in the UK made from …….drumroll ……cricket flour. Yes that’s right, our first bug bar has arrived. Let the insect eating revolution begin!

I would however defy you to tell it’s made of insects by looking at it out of the packet. It looks like every other clean eating nut bar out there. There’s no stray wings, no lurking legs, not even a stray antenna to act like dental floss. The reason is that it’s not made from whole insects but a finely milled cricket flour mixed with things like peanuts, dates, sultanas, sunflower seeds, goji berries and cacao to make a bar.

Regular readers will know I’m no stranger to the bug eating idea and when you’ve eaten actual silkworm larvae, spiders, giant snails etc, a bit of milled cricket holds no fear. I’ve also had bug bars before in the US. I do have to say though, this one is actually really, really good – especially the Cacao and Cricket Flour one. I’d actually go as far as to say they are nicer than some of the other natural bars I’ve tried. If you can get past the whole OMG I’M EATING BUGS thing. 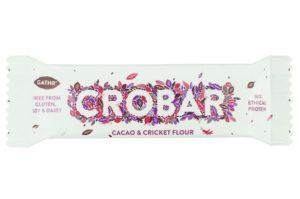 We should be eating insects as an alternative protein source to meat (read more here , but I did learn a few extra cricket specific facts from the Crobar team…like 10g of crickets contain your daily dose of vitamin B12. They have twice the iron of spinach, and they contain omega-3 fats too. I’m also strangely fascinated by the fact that the crickets used in the flour have, and I quote here, “been fed a diet or organic nuts and seeds and fruits to give them a nutty flavour.” Blimey, they eat better than me – but the bars are super-tasty, so it works. 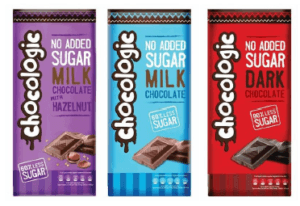 This blogging lark is really hard. The other week I had to eat three bars of chocolate I wanted to tell you about, just to make sure that all of them were as good as the first one. You can thank me later for all my hard research – right now I’m still trying to run off the effects. The bars in question are made by a company called Chocologic and their USP is that they have between 60-90% less sugar than normal, comparable, chocolate bars. Instead they are sweetened with Stevia.

For those not up on their sweeteners de jour, Stevia is a natural no-calorie, no-carbohydrate sweetener made from a plant commonly found in South America. It’s been traditionally used to sweeten foods for years, and a few years ago, it was launched in the UK market as an alternative to artificial sweeteners. Since then it’s been used to cut carb counts and calories in all sorts of products. It’s also suitable for diabetics. Now, Chocologic are using it in their chocolate bars. And, I have to admit they are really good. If I hadn’t had a press release and labels proclaiming that this was no added sugar chocolate I wouldn’t have been able to tell – and The Boyfriend, who, for someone who says he’s not a fan of chocolate pulled his weight quite nicely during this particular testing, was also a big fan.

It comes in three varieties – Milk Chocolate, Dark Chocolate and Milk Chocolate with Hazelnuts. Of the three, the Hazelnut one was my favourite, then the Dark, Milk was nice but a bit bland compared to the other two. In terms of calories, carbs, fat etc here’s how the three flavours weigh up per serving of four squares (that’s a sixth of the bar).

Looks great doesn’t it – the only thing is I defy you to do is to just eat four squares. We ate the whole 80g bar between us in one go – so we could multiply each of the above counts by three. Even then though, there were still fewer calories than a Mars Bar, so it’s not soooo bad. I’ll just keep telling myself that, shall I? You’ll find Chocologic bars in Tesco. 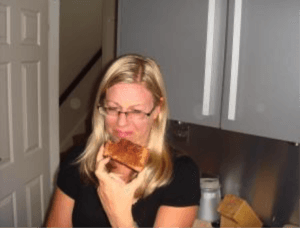 There was a piece recently on the Daily Mail website about the faces Japanese people pull when they first taste Marmite which reminded me of a post I did a while back, with exactly the same theme, what does your Marmite face look like?

I came across a good idea in a recent issue of US Health magazine where they suggested that to boost the variety in your diet you try a discomfort food every week. That means either tasting a food you’ve never had before, or re-trying a food you don’t think you like. I decided to give it a go – first up was kale, I’d never tried it despite it coming out time and time again as THE most healthy vegetable you can eat. It’s lovely, particularly in Asian noodle dishes instead of bok choy. The Boyfriend then pointed out that my ultimate discomfort food is Marmite.

I loathe it. I can’t tell you if I’ve ever eaten it as the smell alone makes me gag but, apparently, it’s good for you (B vitamins and all that) so I figured, okay we’ll see. After all, until a year ago I didn’t think I liked olives – then a one-hour wait for a table in a Madrid restaurant with a bowl of them in front of me disproved that belief. I eat at least five a day now, so maybe I’m wrong about Marmite. 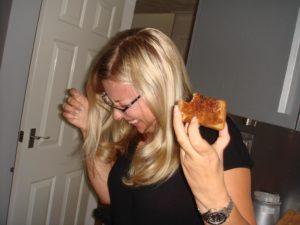 After all, if I could learn to like it, it would give a health boost. It’s packed with B vitamins including folic acid and it’s a great source of B12 for vegetarians. It’s low in calories, low in sugar, low in fat and low GI.

The Boyfriend offered to make it for me, giggling maniacally as he slapped it on a bit of toast. He even had the camera ready…. My first thought was it doesn’t smell on toast – a result — then I then took a bite. It didn’t taste too bad. Then I swallowed, and the aftertaste hit. Yuck. It really is the nastiest substance known to mankind. I had to drink half a pint of milk to get rid of it. Never, ever again. So, what’s your discomfort food? And are you brave enough to try it?

This news item first appeared in Desang Diabetes Magazine, our free-to-receive digital journal. We cover diabetes news, diabetes management
equipment (diabetes kit) and news about food suitable for a diabetic diet. Go to the top of this page to sign up – we just need your email address.