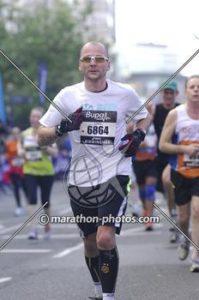 Originally Vince Cope trained at a teacher, specialising in sports, and then joined Police Service in December 1996. Diagnosed with Type 1 diabetes in 2009, Cope subsequently completed Snowdonia Marathon in October 2014.

Working in front-line policing, Cope was the first police officer in his force to be able to go to work wearing an insulin pump. The pump, an Accu-Chek Combo, had to be assessed for its suitability and safety both for himself and for others in his role with the police. Having passed the evaluation, he has worn his insulin pump on the job ever since.

He says, “It has been much easier to handle my diabetes at work using my pump rather than having to take multiple daily injections. It’s a lot less hassle when you’re in uniform. The remote on the Accu-Chek Combo means I can jut take it out of my pocket and deliver the dose. No one needs to know. There are no needles and having to stop to find a site to inject into. It’s given me more confidence to work out of the office and on the front line – I don’t even have to remember to have an insulin pen with me and I can control the basal easily if things don’t go to plan and I am out for more time than I expected.”

It’s a lot less fuss for the people who work with him too. “It’s been easier for my colleagues to understand,” he says, “and they are genuinely interested in the technology.” 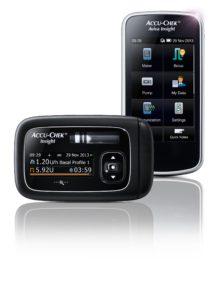 It was when he was on a trial for the new Accu-Chek Insight pump that Vince undertook the Snowdonia Marathon – a 26.2-mile race that includes running across three mountains in the scenic National Park in north Wales. He looks back on this adventure and says, “This is an endurance sport for which I had to undergo rigorous training, including high impact training (HIT) and long-distance running. I particularly enjoyed the easy navigation of the Accu-Chek Insight insulin pump, along with the availability of data-on-screen I felt I had much greater control of my diabetes without the fear of sudden hypos. I think that the pump was a crucial asset in a solo run of this kind.”

In addition while training for the marathon Vince had access to some Dexcom CGM sensors which he wore in order to better understand how his body was reacting to his increased activity. “I thought they were great – it’s even more information which can be really useful to see patterns. They had a separate receiver to the pump, so it was a bit of extra kit to carry around, but the hospital used to download the data and we all looked at the results to figure out what changes we could make.”

As well as continuing with his day job, and training at the gym regularly, Cope now helps run an online forum for police who have diabetes, as well as training other police in skills, such as self-defense.