Insulin patches and other new ways to deliver insulin into diabetics 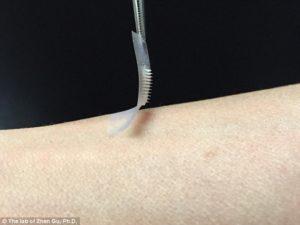 An article entitled, Glucose-Responsive Microgels Integrated with Enzyme Nanocapsules for Closed-Loop Insulin Delivery, was published by the American Chemical Society in 2013. It was written by Dr Zhen Gu, and others, and was credited to the Department of Chemical Engineering, Massachusetts Institute of Technology. This article referred back to another study reproduced in Nanomagazine called Injectable ‘smart sponge’ holds promise for controlled drug delivery, featuring an interview with Gu. That article reported that researchers had developed a drug delivery technique for diabetes treatment in which a sponge-like material surrounds an insulin core. The sponge expanded and contracted in response to blood sugar levels to release insulin as needed. It was proposed that the technique could also be used for targeted drug delivery to cancer cells too.

Gu, lead author of a paper describing the work (and an assistant professor in the joint biomedical engineering program at North Carolina State University and the University of North Carolina at Chapel Hill) explained the point of the research: “We wanted to mimic the function of health beta-cells, which produce insulin and control its release in a healthy body,” said. “But what we found also held promise for smart drug delivery targeting cancer or other diseases.”
The matrix

At the time the researchers created a spherical, sponge-like matrix out of chitosan, a material found in shrimp and crab shells. Scattered throughout this matrix are smaller nanocapsules made of a porous polymer that contain glucose oxidase or catalase enzymes. The sponge-like matrix surrounds a reservoir that contains insulin. The entire matrix sphere is approximately 250 micrometers in diameter and can be injected into a patient.

When a diabetic’s blood sugar rises, the glucose triggered a reaction that caused the nanocapsules’ enzymes to release hydrogen ions. Those ions bound to the molecular strands of the chitosan sponge, giving them a positive charge. The positively charged chitosan strands then push away from each other, creating larger gaps in the sponge’s pores that allow the insulin to escape into the bloodstream. As the insulin is released, the body’s glucose levels begin to drop. This causes the chitosan to lose its positive charge, and the strands begin to come back together. This shrinks the size of the pores in the sponge, trapping the remaining insulin.
“We can also adjust the size of the overall ‘sponge’ matrix as needed, as small as 100 nanometers,” Gu said, “and the chitosan itself can be absorbed by the body, so there are no long term health effects.”

In tests using diabetic laboratory mice, the researchers found the sponge matrix was effective at reducing blood sugar for up to 48 hours. However, the researchers published a separate ‘smart system’ for insulin delivery that maintained normal blood sugar levels for up to 10 days. “But we learned a lot from the promising ‘sponge’ research and will further optimize it. Meanwhile, we are already exploring applications to combat cancer,” Gu said.

The end of injections?
As an update, and as reported in the Daily Mail on 22 June 2015 in an article called, The end of injections for diabetics? Smart patch can automatically release insulin into the bloodstream, by Mark Prigg, there was an update as to progress from Dr Gu. It reported on a ‘Smart patch’, a thin square no bigger than a penny, covered with more than 100 tiny needles, each about the size of an eyelash, which when it detects increases in blood sugar levels, secretes doses of insulin.

The article reported that painful insulin injections could become a thing of the past with researchers unveiling a smart patch that can automatically release insulin when needed. It can monitor the blood, and when it detects increases in blood sugar levels, secrete doses of insulin.

The patch — a thin square no bigger than a penny — is covered with more than one hundred tiny needles, each about the size of an eyelash. These ‘microneedles’ are packed with microscopic storage units for insulin and glucose-sensing enzymes that rapidly release their cargo when blood sugar levels get too high.

The study, which is published in the Proceedings of the National Academy of Sciences (PNAS), found that the new, painless patch could lower blood glucose in a mouse model of Type 1 diabetes for up to nine hours. More pre-clinical tests and subsequent clinical trials in humans will be required before the patch can be administered to patients, but the approach shows great promise.
“We have designed a patch for diabetes that works fast, is easy to use, and is made from nontoxic, biocompatible materials,” said co-senior author Zhen Gu. “The whole system can be personalized to account for a diabetic’s weight and sensitivity to insulin, so we could make the smart patch even smarter.”

Beta cell copies
As reported in the Daily Mail article, Gu and his colleagues chose to emulate the body’s natural insulin generators known as beta cells. These versatile cells act both as factories and warehouses, making and storing insulin in tiny sacs called vesicles. They also behave like alarm call centres, sensing increases in blood sugar levels and signaling the release of insulin into the bloodstream.

“We constructed artificial vesicles to perform these same functions by using two materials that could easily be found in nature,” said PNAS first author Jiching Yu, a PhD student in Gu’s lab. The result was millions of bubble-like structures, each 100 times smaller than the width of a human hair. Into each of these vesicles, the researchers inserted a core of solid insulin and enzymes specially designed to sense glucose.

In lab experiments, when blood sugar levels increased, the excess glucose crowded into the artificial vesicles. The enzymes then converted the glucose into gluconic acid, consuming oxygen all the while. The resulting lack of oxygen or ‘hypoxia’ made the hydrophobic NI molecules turn hydrophilic, causing the vesicles to rapidly fall apart and send insulin into the bloodstream.

“The hard part of diabetes care is not the insulin shots, or the blood sugar checks, or the diet but the fact that you have to do them all several times a day every day for the rest of your life”, says John Buse, MD, PhD, co-senior author of the PNAS paper, director of the UNC Diabetes Care Center, and past president of the American Diabetes Association. “If we can get these patches to work in people, it will be a game changer.”

Because mice are less sensitive to insulin than humans, the researchers think that the blood sugar-stabilizing effects of the patch could last even longer when given to actual patients. Their eventual goal, Gu said, is to develop a smart insulin patch that patients would only have to change every few days.