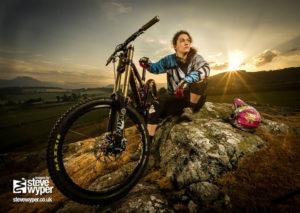 Rebecca Kennedy is the highest ranked senior female in the UK and has a brown belt in judo, boxes twice a week, cyclies when possible and does yoga for flexibility. She currently studies textile design at Heriot Watt University, Galashiels and finds that cycling was a way of distracting her from her diabetes. Her father works in the Forestry Commission, so she has had plenty of space and time to develop new skills. By the time she was 14 she was competing in mini downhill races. Her grandmother lives near Fort William which is where she watched her first world cup. Then she was hooked.

“Trying to compete at this level takes a lot of commitment both in time and resources”, says father David Kennedy who drives her to every corner of the UK to compete throughout the year. Rebecca adds, “The only way my Dad can cope with the stress of racing at these speeds is by not watching me, not least because if I fall I seem to do it right in front of him. I am very focused and determined to make a name for myself in this sport and as racing veteran Chris Ball said, ‘keep doing what you are doing and you will get there. Rachel Atherton took 10 years, to get where she is today.”

Girl power
There are very few women competing at a high level in Downhill Mountain biking; Rachel Atherton is one of Rebecca’s greatest inspirations. Tracey Moseley, current Enduro World Champion, comments, “Since retiring from Downhill racing in 2011, I have continued to watch out for the up and coming young riders in the sport and Rebecca’s name is one that I have spotted at the top of the results sheets for sometime now. She loves the sport and is obviously determined to get better and better. With such success in British Women’s Downhill it’s important that we try and maintain that history and keep producing new talent.” 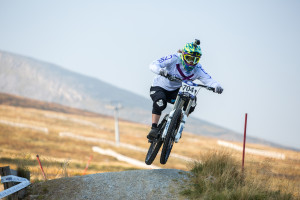 Diagnosed with type 1 diabetes at the age of six, she’s now 20 and injects four times a day and tests about as many times. She describes her diabetes control as ‘very good’, and has an enviable HbA1c of 6.8%. While she knows about carb counting, she finds it complicated to keep calculating carb values so she tends to go low carb. She says, “I’m careful about what I eat, and have a lot of protein and fruit and veg. When I’m training, as it’s so intense, I eat carbs before and after to keep my energy up, but not snacky carbs, it’s more likely to be fruit or handfuls of nuts and raisins. Carbs can make me a bit foggy, while I find fruit has more of a ‘clean’ feeling to it. It’s hard to fit in food at all when training – I often lose my appetite due to concentrating and generally being stressed and nervous while competing. It comes back afterwards though!”

Jelly baby
Not surprisingly, with the high level of energy expenditure that goes on while competing, Rebecca says she’s had ‘my fair share of hypos’. She once could not be woken up the morning after doing a day of practice before a race, ‘my father somehow brought me round by plying me with honey and Lucozade. I find the hypos come after the training, up to 12 hours later and at 4am. I know now to eat before bedtime to try to avoid those lows.’ She carries glucose tablets with her always, and has fruit, Lucozade and a bag of jelly babies in her backpack when cycling. She says, ‘I’m sensible, but I’ve never wanted to let diabetes get in the way of what I want to do.”