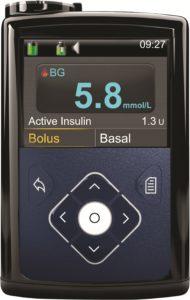 The 640g is the latest in the MiniMed range from Medtronic Diabetes Care. It brings joins other contenders in the insulin pump arena in having a colour screen but also carries on board a newly patented technology called SmartGuard. This is a closed-loop system whereby insulin delivery is automatically suspended by the pump if the associated CGM measures a low glucose reading.

Working with Medtronic’s own CGM technology – the Guardian Link Transmitter featuring Enlite sensors. The pump receives this information and based on settings inputted specifically for the individual concerned, the pump stops insulin delivery and by doing so can avert the person from having a hypo. Also referred to as ‘low glucose suspend,’ trials have proven that this system has been helping diabetics to make it through the night without having a hypo (81% on a recent trial at a London hospital reported a reduction in hypoclycaemic events).

Smart steps
The MiniMed 640g comes in five colours and the model is also waterproof and comes with a Bayer Contour Next Link II – a blood test meter that also doubles are a remote bolus controller. When a blood test reading is taken, it’s possible to administer a bolus using wi-fi from the meter to the pump for easier daily diabetes management. Users set their own limits for either the low glucose suspend on the SmartGuard technology as well as for any low or high blood glucose alerts on the CGM system. Having an improved remote way to bolus means users can hide their pump if needed, whereas previously they would have had to be able to access it to administer a bolus.

With a new menu and completely different screen, the navigation of the 640g is slightly different from previous MiniMed models, but is claimed to be more intuitive. Simple icons on screen help get users direct to the necessary screens to check on active insulin, insulin left in reservoir, battery time left or time since last infusion set change as well as offering instant reference to data such as blood test results and/or CGM reading 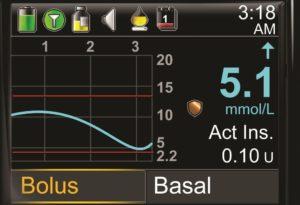 Information about ‘active insulin’ is also shown on-screen, helping users to understand if it’s necessary to take further action, or wait to allow the insulin they have already taken on board to finish its action.

The UK is the first country to have this new pump despite Medtronic having originally been an American company with a large user base on its home territory and is due to be available during February 2015. Medtronic argues that this system – also called a Sensor Augmented Pump, or SAP – is one step closer to the ideal of a closed loop insulin delivery system (or artificial pancreas), and that no other manufacturer is even in the same ball-park.

SmartGuard technology stops insulin delivery when sensor glucose levels are predicted to approach a low limit, and starts insulin back up when levels recover. This means advanced protection against hypos.