Paul Thompson was diagnosed in 1999 when he was 39 years old and while working as a paramedic. At the time they were short-staffed so he’d been doing back-to-back shifts. It was also a very hot summer.

“I’d been working hard,” he recalls, “so I wasn’t surprised to feel tired, and as it was hot I wasn’t surprised at being thirsty all the time either, and peeing a lot. I thought that was because I was drinking so much. At one point, because of working extra shifts, I’d not eaten for 12 hours. I was hungry and feeling unwell, but thought I must have a low blood sugar. We had testing strips in the ambulance and I was used to using them on patients, and I thought, ‘why don’t I check if I have a low blood sugar?’”

Paul used a bottle of the old colourometric test strips and it indicated that he had a very high blood sugar. “My reaction was one of utter disbelief,” he says, “as I thought it would be low. I did the test twice to check, then though, ‘oh no’. The next day I went to a diabetes clinic and they gave me the diagnosis of Type 2 diabetes. I do not know how long I’d had diabetes, as the symptoms were masked by the circumstances – over worked and a hot summer. I continued to work as a paramedic, but six months later I had a heart attack, which was probably due to the high blood sugars I must have sustained. After that I ended up working in the private sector as a freelance paramedic.” 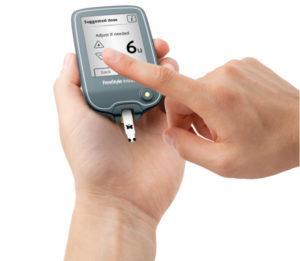 Paul says that his freelance role is still hard work but it gives him more control over his time. He does training with students and sport and event cover, or TV and film work where he is the paramedic on set. He says, “I’ve never been short of work, though I do have to travel quite a bit. I am now on insulin and take two long-acting shots a day, and short-acting shots with food. I use a Carbs&Cals app on my phone and have a Freestyle Insulinx meter with a bolus wizard, so I dial my carbs in to it once I’ve calculated them and it recommends the insulin dose. As I’m on Lantus and Novo rapid, I have NovoPens, and I also carry around Needlebay needle pods. Needlebay is a fantastic product, I find it really useful. I use the seven-day unit which has two needle bays per day. I use if for my pills, as I take Metformin, and for the two long-acting injections I have daily. I have another bag for my blood testing kit and the short-acting insulin.” 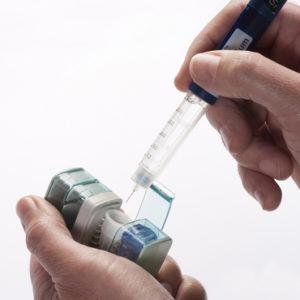 Paul tests at least three times a day, before each meal, but regularly does five-a-day, and sometimes if he’s driving a lot or not feeling well, it might be as many as seven times a day. In case of a hypo he keeps either Glucotabs or Lucozade tablets to hand, or may have the occasional Mars Bar in an emergency, though as he’s very insulin resistant it’s rare for him to have a hypo. With all his medical emergency training he’s in good shape for handing his condition, but he also says that “having the right gear certainly helps with any medical condition and I rely on mine a lot.”