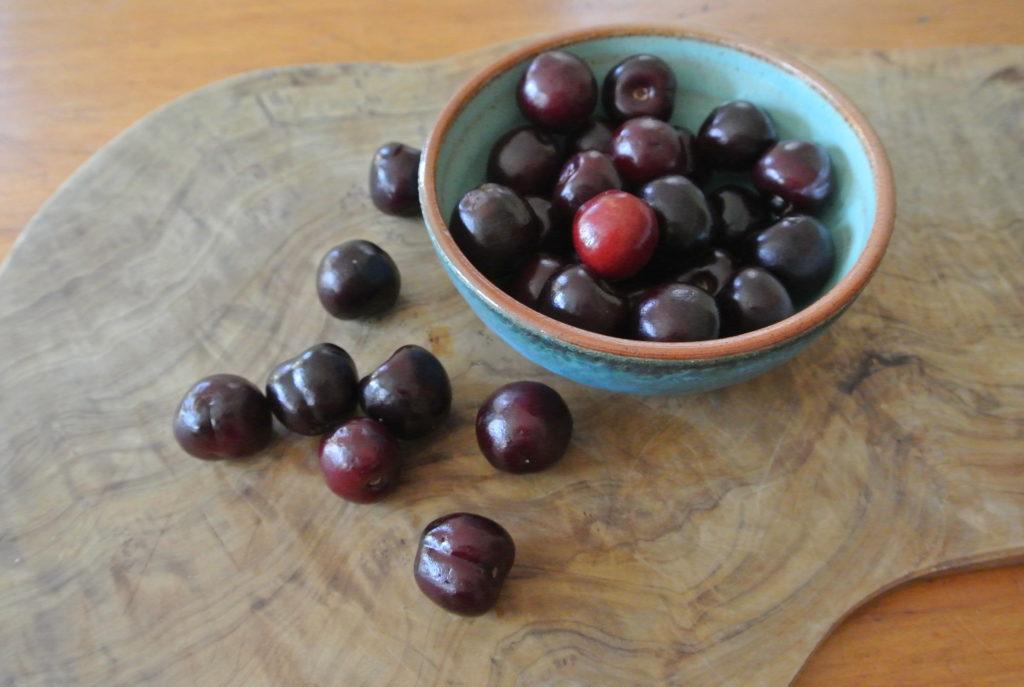 Cherries are related to plums and have been eaten since the Stone Age, as cherry stones (pits) have been found in Stone Age caves in Europe and the Roman army marched on a stomach likely to have been at least partly filled by with cherries. Like many fruits, they are a rich source of complex sugars and can be dried for easy transport, though they already come in the neatest little bite-sized packages. There is no need for preparation, just pop them in.

Usually dark shades of red, or sometimes yellow, they come in either sweet or sour varieties. The main sour variety is Montmorency, which are often canned or frozen and used for pie fillings or sauces. The sweet ones have great names, like Bing, Lambert, Rainer and Royal Ann.

They have high antioxidant properties and are high in phytosterols – plant sterols which can be used to lower bad LDL cholesterol levels and can reduce the risk of heart disease.

They can also be used to calm the stomach in cases of nausea, vomiting and can treat bronchitis, asthma and diarrhea. Natasha Turner, MD, writing an article for the Huffington Post revealed six hidden health benefits which included the fact that whole, sour cherries can reduce the chances of developing gout and reducing the severity of gout attacks (in doses of 10-12 cherries up to three times a day) may also aid in relieving arthritic pain and even migraines. She also wrote that drinking half a cup of cherry juice half an hour before bed can help you sleep, and that sour cherries may also combat body fat.

Take that phrase as literally as you can, by choosing each individual fruit, if you can. They should be large, glossy, plump, hard and dark-coloured for their variety. Choose ones with their stems on. Buy them with their stems on then keep them cool and moist. If left in a bowl in a warm environment they will quickly spoil. Take any spoiled fruit out quickly, as one spoiled cherry will quickly start the decaying process off in other cherries.

Most cherry recipes are puddings or chutneys, and hence both high in either fat, sugar or both and not really what you’d recommend for a diabetic diet, so bear that in mind.

Set the oven at 180C/gas mark 4. Stone 350-400g of cherries. Lightly butter a 20cm diameter baking dish, then dust with a couple of tsp of sugar. Tip in the cherries. Put 80g of sugar in a mixing bowl and beat in 2 large eggs, followed by 90g of flour, 150ml of milk and a drop or two of vanilla extract with a large balloon whisk. Melt 30g of butter in a small pan, then stir into the mixture. Pour the batter over the cherries and bake for 35 minutes, until puffed and golden. Remove from the oven and dust with icing sugar.  Serve the warm, like a quiche, with cream from a jug. Recipe by Nigel Slater for The Guardian

Some information in this article is from WebMD which picked cherries as fruit of the month.