The carb content of chillis for the diabetic diet 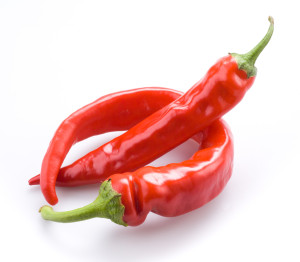 Sometimes also called the Chilli Pepper, the chili plant is native to Central American region where it was used as the chief spice ingredients in Mexican cuisine for centuries. It was introduced to the rest of the world by Spanish and Portuguese explorers during 16th and 17th centuries and now grown widely in many parts of the world as an important commercial crop. The hotness of chili is measured in “Scoville heat units” (SHU). On the Scoville scale, a sweet bell pepper scores 0, a jalapeño pepper around 2,500-4,000 units, and Mexican habañeros have 200,000 to 500,000 units. Chilies contain the alkaloid compound, capsaicin, which gives strong spicy pungent character.

Their colours range from red, orange, yellow and green with the occasional purple one about. They seem to offer health benefits, such as increased protecion from bacterial and viral infection, protection against heart disease and the alleviation of heart disease as well as a reduced risk of Type 2 diabetes. But most of us like them because they add a kick to your average dinner. They have famously made into hot sauces such as the brand name Tobasco or Peri Peri sauce, often found lurking in the back of cupboards and frequently seeing daylight when the barbecue is dusted off. 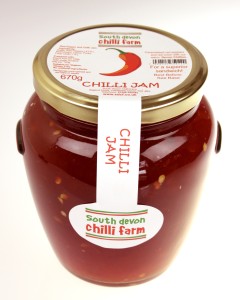 Despite the fame of chillis from around the world, it’s possible to grow them in the UK. Hot to trot, the chilli plant is not only very ornamental with dark green leaves and deep red fruits from the capsicum plant family, but it provide a supply of fresh chillies for use in the kitchen to perk up your dishes.

The South Devon Chilli Farm is dedicated to British-grown chilli crops and not only sells the chillis themselves as well as a range of chilli-related products, from Chilli Jam to Hot Chilli Chocolate. They also sell a choice of chilli growing kits containing everything you need to grow a productive chilli plant on a sunny windowsill.

A host of awards

Established in 2003, the South Devon Chilli Farm grows over 10,000 chilli plants each year and harvest tonnes of fresh chillies. From these, the farm makes a range of products. Tasted amongst 10,000 other products at the 2013 Great Taste Awards, South Devon Chilli Farm’s chilli drinking chocolate wowed the judges and was been awarded a highly sought after star. Other recent award wins for South Devon Chilli Farm included a Gold which was awarded to its Honeycomb Chilli Chocolate in the 2012 Taste of the West awards. The same year it was one of only four products to win a Gold in the confectionary category. It was also awarded a Silver for its Cold Pressed Rapeseed Chilli Oil, Pepper Relish and Smokey Chipotle Salsa and a Bronze for its Serrano Chilli sauce. 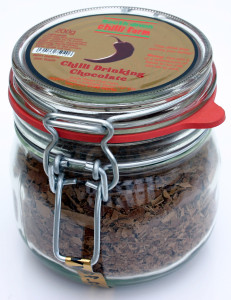 A handy store cupboard ingredient is the ‘honey pot’ shaped Chilli Jam made from mixed blend of chillies, caramelised sweet peppers and red onions, lemon juice and sugar. It’s Chilli Drinking Chocolate is an Aztec style hot chocolate giving twice the warmth of a regular hot chocolate. It’s Extreme Bhut Jolokia sauce is perfect for serious chilli heads, this Extreme sauce is made simply from Bhut Jolokia chillies (similar to that of Habanero chillies), red peppers, cider vinegar, lemon juice and a little salt. A bottle of this lasts a very long time!

Chilli nutrition content: Per 100g of chilli (which no one in their right mind would ever eat), there are 40 calories, 2g of protein and 9g of carbohydrate. Also contains a large dose of Vitamin C as well as a dose of Vitamin A and Vitamin B6.