You can bake them, crisp them, mash them, roast them — pretty much do what you want to with them. But the versatility of the potato is also why the GI of your creations can vary – but they’re all going to be on the high side and affect your blood sugars. 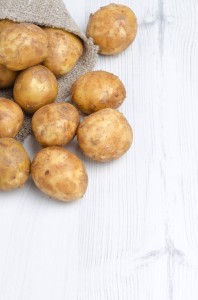 The reason potatoes are so stuffed with carbs is that they are predominantly made up of starch. The impact of the starch in potatoes can place them in the “bad carb” category for some people. It’s possible to argue that the carbohydrates in potatoes are not a good choice for anyone who has diabetes.

Potatoes are often broadly classified as high on the Glycaemic Index (GI) and so are often excluded if you’re attempting to follow a low-carb diet.

The high GI of potatoes can directly affect blood glucose levels, and can also vary considerably depending on type (such as red, russet, white, or Prince Edward) as well as how they are cooked (baked, fried, mashed) and what’s added to them in the process (such as baked potato and cheese). However, as potatoes are a part of so many British dishes, it’s better to gain a better understanding of how your potatoes are cooked affecting your blood glucose levels than attempt to avoid them altogether. 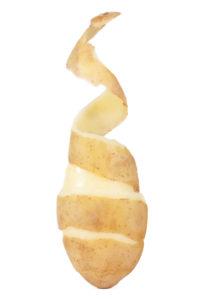 If mashed, the carbs would be similar but the absorption rate (or GI) would be higher as many of the long strings of glucose in the starches would have been broken down by the mashing process and will therefore absorb more quickly. Also, don’t forget that you are adding a few carbs if using milk, and adding to the fat content if you add olive oil or butter too.

There are a few other goodies in there too, as well as being virtually fat free. In the same 100g there is a good dollop of potassium as well as 32% of your RDA* of Vitamin A and 15% of your RDA of B-6 (*RDA being your recommended daily amount).  In her book Potatoes Not Prozac: How to Control Depression, Food Cravings and Weight Gain, American MD Kathleen Desmaison investigates managing biochemical imbalances brought about by sugar sensitivity by consuming a diet of more complex carbohydrates, where she advocates eating potatoes in their skins as part of her proposal for a dietary solution for mental health and well-being.

A potato crop failure due to disease lead to the Irish Famine and the ubiquity of the root is still evident.  Actually 80% water, with the waxy ones slightly higher and the flour slightly lower. Surprisingly, potatoes are lower in carbs than most root veggies. Plain boiled potato has less calories than the equivalent weight of plain boiled rice or pasta. If you store them for long in the cold, they gain in their sugar content.

You can bake potatoes, but that too increases their GI as does frying them. An 80g portion of chips would be 25g of carbs. They are low fat then, until you fry them in oil, mash them with butter or roast them in goose fat. Yet 100g of fresh potato gives you 50% of your RDA of Vitamin C (though long-term storage will reduce the amount of Vitamin C in the potato).

What type of tatties?

Not only versatile in themselves, there are a wide variety of potatoes to choose from.  Some suit certain dishes better than others. For chips and wedges the lower sugars of Maris Pipers work well. For roasties, the King Edward rules supreme, the skin turning crispy while the inside stays fluffy. For a mighty mash, Desirees have a smooth texture and creamy flavour. For basic boiled potatoes, waxy Charlottes work well and can go in salads. For a gratin, try the slightly waxy Mozart variety which can be thinly sliced for a scrummy gratin.

Potatoes are used to brew alcoholic beverages such as vodka, potcheen or akavit. Potato starch is used in the food industry for thickeners and binders of soups and sauces and in the textile industry as adhesives as well as for the manufacturing of papers and boards.Potato skins, along with honey, are a folk remedy for burns in India. Burn centres in India have experimented with the use of the thin outer skin layer to protect burns while healing.
This news item first appeared in our free-to-receive online magazine. Go to the home page of this website to sign up – we just need your email address.