Sky high and loving it — weekend flying event with diabetes 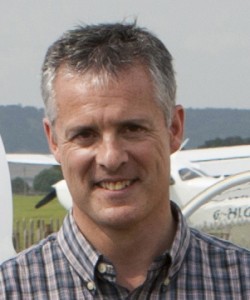 Describing his life before diabetes, Douglas Cairns says, “I was always sporty and from my early teens I had an ambition to fly jets in the RAF.” So much for any young boys dream, but Douglas was born and brought up in the Scottish Highlands with RAF jets flying overhead. He went to Edinburgh University and joined the air squadron there and started to learn to fly at age 19. He says of that time, “I couldn’t have been happier.” He was chasing his dream – and catching it.

Douglas sponsored by the RAF since the latter part of his University career to finish his course. He then went into officer training, flying training, then straight on to be being a jet instructor. He was diagnosed with Type 1 diabetes at 25 years old, which threw a major spanner in the works….

The diagnosis came about after he had a dose ‘flu at Christmas in 1988.  He recovered but was tired and hungry and thirsty — all the classic symptoms — but he initially tried to ignore his symptoms, thinking it was the after effects of the ‘flu.  He recalls, “The RAF mentality is not one of getting ill and not recovering! I was not feeling awful, just not great, but I was losing weight.” Back at base they did do an initial test on Douglas and he was told that it was probably diabetes. In February 1989 he was put forward to another RAF hospital where a very adroit doctor confirmed, “You are a diabetic and you were a pilot.”

Even today, more than twenty years later, Douglas remembers these as very harsh words. At that time it was not possible to fly with a legal licence anywhere in the world, either privately, militarily or commercially. “My flying career was over,” says Douglas. “I did not have to leave the RAF but did have to stop flying. I could possibly have stayed as an Admin or Supply officer, but I had joined to fly and decided to leave and pursue a different career.” So Douglas left the RAF and his dream behind. 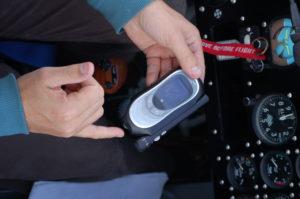 Blood testing in the cockpit.

It wasn’t until 1996 that he went to Thailand where there was an airfield outside of Bangkok where some instructors, many of which had military backgrounds, were prepared to fly with Douglas and let him take the controls in the cockpit. “They knew my situation,” says Douglas, “I went out a few times each month and I thought it was absolutely fantastic. They were just small planes with single engines – not jets – but it was fantastic to be back flying.” In the UK, Douglas had been checking regularly as to his circumstances in terms of getting a pilot’s licence again, but had been told that there was no chance of his ever being able to fly again.  But while in Thailand, nearly ten years after having to leave the RAF, an American instructor at the airfield told him that the rules had changed in the USA and that it was now possible to fly with Type 1 diabetes, under certain circumstances.

“I ended up chasing my dream again — going to the US where I passed a third class medical and then supplied records as to my diabetes control, the absence of hypos and any diabetes complications,” says Douglas.

He received a special issuance Third Class medical, which allowed him full private pilot privileges, so he could now legally fly again – at least in the USA. His obligations to retain the license are to test 30 minutes before flying then each hour into the flight and 30 minutes before landing. The details are that if he tests between 5.5mmols and 16.5mmls he is fit to fly. If he is over 16.5mmols he has to land the plane and bring his sugars back within range before continuing. If he is at 5.5mmols or below then he must ingest 20g of readily absorbable carbohydrates (which presumably he would do anyway if he was going to have a hypo).  “I consider this to be a wide window with good buffers,” says Douglas, “I find that 5.5mmols is low enough to allow a decent margin of safety before actually being in hypo, and am very rarely ever over 16.5mmols and have never been near that when flying.” 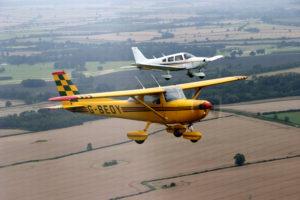 Up, up and away! Douglas in the air….

Douglas uses the Accu-Chek Mobile to test in the cockpit because it is all self contained. “It is a great piece of kit,” he says. “I’d use it even if I wasn’t flying, but when I am it’s very straightforward and easy to use.”

He has used this testing protocol for the last 10 years and he finds it keeps him a safe and effective pilot and has never tested over 16.5mmols. “The blood testing protocol becomes part of all the other necessary cockpit checks and controls. I’m usually between 6-9mmols,” says Douglas, “if I’m ever below then I have handy carbs with me and take them immediately. I believe that having diabetes should not limit the scope of someone’s dreams and ambitions.”

Blanket bans on flying as a pilot with diabetes are still in place in all but five countries worldwide. The USA, Canada, Australia allowed licenses to qualifying pilots in 1997, Israel a while afterwards with the UK following in 2002.  In the USA Douglas’s full private pilot’s privileges mean he can fly planes with 1, 2 or 4 engines, he can take passengers, fly at night-time and generally access all areas. However, in other countries there are restrictions. In the UK he can only fly in daylight and in a single-engine plane. Blanket bans forbidding people with diabetes flying planes are still in place in some countries, but this testing protocol is extremely effective, says Douglas. “As a result of losing my job due to my diagnosis of diabetes I now spend time helping to raise awareness of the fact that it is possible to fly safely with diabetes. I have done 2,800 flying hours to date to prove it,” he says.

In an undertaking partly sponsored by Accu-Chek Mobile, Douglas recently flew to the North Pole, where he ended up flying 1,300 miles in 8 hours and 17 minutes — a new world speed record for this particular flight. As part of the experience he landed on a commercial airfield run by Russians where he had to land on the ice. “It was amazing,” he says, “It was minus 26˚ and 4.30am in the morning, yet 20 out of the 30 people who were stationed there were waiting for me because they had never seen anything like this small aircraft coming into view over the Polar ice. It was wonderful.”  It was also the first time that this particular record had been done in a light twin-engined aircraft flown solo, yet alone by someone with diabetes.

Douglas has done other extreme endurance records in order to show what it’s possible do with diabetes and is part of Pilots With Diabetes, a group formed by a small but determined group of pilots who lost a career due to having been diagnosed with Type 1 diabetes.

You don’t have to be a world record beater or even want to fly a plane – it’s not everyone’s calling. Douglas says, “Our point is to persuade the authorities to have more flexible licensing rules about individuals and not to have our dreams and ambitions restricted by diabetes. No one’s dreams should be limited by diabetes.”

To find out more about Douglas Cairns and the other pilots flying high with diabetes, visit www.diabetespolarflights.org or www.flyingwithdiabetes.com or www.pilotswithdiabetes.com